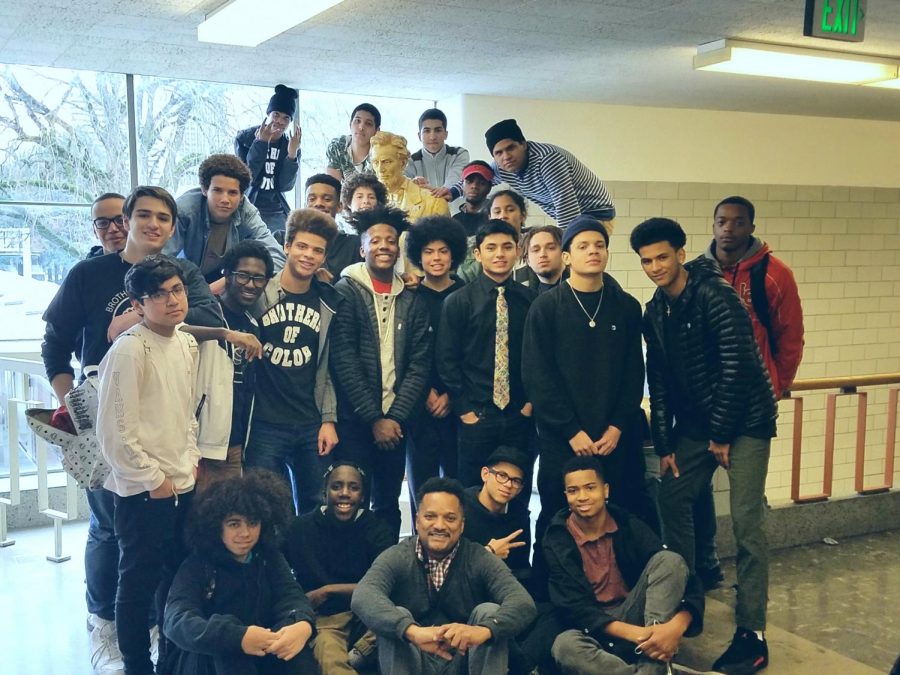 Lincoln Vice Principal James McGee (middle, bottom row) poses with members of Brothers of Color at the end of freshman hall. McGee has accepted a job as the principal of Grant High School.

After six years at Lincoln, Vice Principal James McGee has taken a new job as principal of Grant High School. He will assume his role at the beginning of the 2020-21 school year.

McGee always knew he wanted to work with kids. In his senior year at Portland State University, he joined a program that mentored youth in the juvenile detention center system. After graduating, he became a buyer at Meier and Frank– renamed Macy’s– in Sept. 2006.

“To be honest, [I] hated the job,” says McGee. “You know, I’m a people person. I just didn’t have fun calculating sales and trying to figure out which shoes are going to sell best.”

After a year working as a buyer, McGee decided to pursue something he actually enjoyed: engaging with students.

“That took me into the schools not just as a community activist, but now as a parent. The roles are very, very different,” says McGee.

McGee’s sons attended Grant High School. McGee, who prides himself as being a “very involved parent,” decided to become a part of the Grant Site Council, a group of admin, parents and student representatives who aim to discuss and bring attention to issues at the school.

After three years, he realized that he wanted to work in schools.

“I believed I could be a greater resource for the students I serve working from within [the school] system than outside of it,” says McGee.

He got his graduate degree in School Counseling from George Fox University. Shortly thereafter he was hired by Portland Public Schools (PPS). The district did not tell him where he would be going– just that he would be working in a high school.

“I was pretty sure I knew where I was going. And it was not Lincoln,” says McGee. “In fact, the principal of that school had been emailing me for a few months, telling me that she was going to have an opening.”

Although he was surprised when he was told he would be working at Lincoln, McGee kept an open mind.

“I [have to] tell you, it’s been a great experience,” says McGee. “It allowed me to work with students that I had not traditionally worked with.”

Despite finally getting to work with students from within the school as a counselor, McGee felt he could do more for the students in an administrative position. He wanted to be able to make decisions within the school.

“That doesn’t mean that I was gonna become a dictator. It means that it’s easier for me to move the school in a direction that I think best serves our kids,” says McGee.

He chose to stay at Lincoln as a vice principal. One of his most notable accomplishments in his time at the school was helping to create Brothers of Color (BOC).

“Almost everybody in Black Student Union (BSU) was black. But [the boys] just did not feel comfortable sharing their opinions, even around the girls,” says McGee. “And I did not want to quiet the girls at all, [so I asked myself], ‘what can I do to create an opportunity for the boys to be able to show who they are?’ And that’s where Brothers of Color came from.”

BOC has made a strong impact on students of color at Lincoln.

“Mr. McGee’s leadership and presence is really important for a lot of students at Lincoln and especially for those who are also members of BOC,” says senior Javier Gomez, the co-president of BOC. “He has made the club better by promoting a sense of true community between all the members and by constantly working so student males of color have a safe space at Lincoln.”

McGee plans to work with the BSU and BOC at Grant.

Another memory of Lincoln that McGee will never forget is graduation.

This past year, McGee began getting calls from other school districts asking if he was interested in becoming a principal. So, last summer, he decided to apply for a principal job within PPS.

“I was not against applying to other districts, but PPS is important to me. My sons just graduated from [Grant] and I live in Portland,” McGee says. “My hope was that I could remain with PPS.”

McGee is looking forward to his move to Grant.

“I’m a Northeast guy, and I live in [NE Portland], so being able to go to Grant is exciting to me for so many reasons, from the history that my family has with Grant to the work that I’ve done at Grant. So, I’m excited,” McGee says.

Although McGee is leaving Lincoln, he has created a lasting impact on the students.

“Mr. McGee has been there for me when I needed him and he has definitely been a role model to me. I never doubt to seek his advice because I know, whatever he tells me, it’s going to be honest and in my best interest,” says Gomez. “Although we sometimes disagree and at times it feels like he might be a harsh critic, it still feels good to know that you have someone in your corner that wants to see you succeed.”

McGee will miss working with students and staff the most as he departs on his new journey. The bonds and the memories he has made at Lincoln will be something he never forgets.

“[Working at Lincoln] allowed me to work with a demographic that I have not worked with…and there’s just been so many opportunities that I’ve been able to experience at Lincoln. There [have been] no negatives,” says McGee. “Lincoln was just phenomenal. Those working relationships where we really didn’t go into it thinking we could find a solution and then we did, I’m going to miss that day to day interaction with the students and the staff.”