Coronavirus across the country 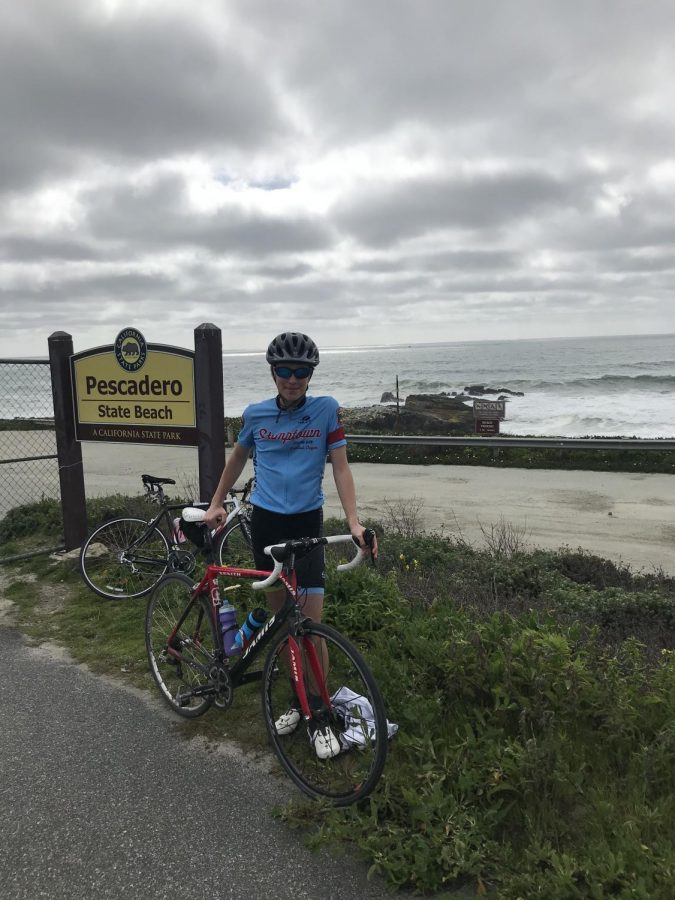 Sophomore Sebastian Accetta, halfway through a 74 mile bike ride during quarantine. Sebastian has been focusing on physical and mental health during this time by getting outside and spending time with his family.

The Cardinal Times interviewed students around the country about their experiences during the Coronavirus pandemic. Across the country, students are moving to online learning and a new way of life. Read more about how students in other states are living during the pandemic.

NEW YORK
Carrie Ortner, a junior at Scarsdale High School, lives in one of the first counties to be hit by the coronavirus in New York and has been out of school since March 9. She, along with most students across the country, have shifted to learning over video calls and using Google Classroom as their primary learning tool.

While Lincoln has shifted to a Pass/Incomplete grading scale for the rest of the year, her school has taken a different approach.

“Since we were all just beginning to navigate remote learning, they based [the third] quarter on a pass/fail system,” says Ortner. The fourth quarter will switch back to a regular A-F grading system, and “any grades that one received during the third quarter while we were still in the building will be added to the fourth quarter grade.”

Living in New York has given Ortner a different view of the pandemic.

“On one of my last visits outside the house, my mom and I went to CVS to pick up a few things we needed,” says Ortner. “While inside, we saw members of the National Guard. They were there to enforce a radius for my neighboring town that had many cases to attempt containment.”

Ortner’s family has also been affected by the coronavirus.

“One of my family members is in the hospital right now with coronavirus. She is a first responder and hospital worker in the ER, so we are not totally shocked that it happened, just hoping for a speedy recovery,” says Ortner.

According to Ortner, most of the people she knows are following social distancing orders.

“I would say that people are taking social distancing seriously, but not staying home,” Ortner says. “I know that there are many groups of friends who take their cars and park them six feet apart from each other just so they can hang out in person.”

Emily Margolis, another junior who lives in Merrick, NY, has noticed similar things.

“Many families take the order seriously but I see all over social media kids hanging out in large groups,” says Margolis.

Margolis’ school closed on March 13, four days after Ortner’s. Both students’ schools are closed for the rest of the year. Both have missed college tours. Both are missing out on life experiences.

Ortner is missing a number of things, including her school’s Junior Olympics, a tradition where juniors are teamed with other students based on their old elementary school and compete in athletic and knowledge-based games.

“After a hard year of classes and ACT/SAT testing, we were all really looking forward to this day,” says Ortner.

In addition to the Junior Olympics, the fundraising event for Ortner’s senior prom was canceled and has yet to find an alternative date

Despite this, both Margolis and Ortner are hopeful for the future.

WASHINGTON
Senior Bella Steedly lives in Woodinville, Washington, which is only ten minutes away from the first reported US coronavirus death on Feb 29, 2020. Her school, The Overlake School, closed shortly after on March 6, 2020.

“We saw it coming, just not like this. We expected less time on campus and precautionary measures to be taken place, but not a total shutdown,” Steedly says.

Steedly’s school had been talking about the virus for weeks before, but it coming to Washington was a surprise.

“We talked about it a lot in my AP Econ class, but it still felt distant and didn’t seem real,” says Steedly.

Similar to Lincoln, Overlake has switched to online based learning including Zoom calls and asynchronous style learning. Their grading system has changed as well.

“Our school moved to a credit/no credit system, so if you get a 70% or above you get credit for the class,” Steedly explains.

Steedly has been going to Overlake since fifth grade, so the abrupt end to her time at school there was shocking.

“We had an all-school meeting to release students and it was weird to think of how it all just ended,” she says.

Many significant senior events were canceled due to the school’s cancellation, and seniors everywhere are figuring out how to hold graduation, prom, and other celebrations. They continue to work on senior projects which are lengthy, creative projects to explore an area of study.

“It’s a bummer to miss out on all the senior events. We are still doing senior projects, and trying to figure out how to do graduation. We thought about doing graduation during thanksgiving break or winter break next year,” Steedly says.

According to the Washington State Department of Health, as of May 6, there were 15,462 cases across the state and 841 deaths. Governor Jay Inslee has mandated a series of actions to limit the spread of coronavirus including a statewide stay-at-home order, restrictions on non-essential businesses, school closures, and rules to protect residents of nursing homes and adult family care centers.

Accetta has been out of school for nearly six weeks, and has taken up a distance learning schedule similar to Lincoln’s at Palo Alto High School.

“At first, school went into these things called flows, which were these optional assignments that teachers were giving out, which was about two hours per class. They didn’t take that much work, Accetta explains. “And then [on Apr. 13], we started making all these assignments mandatory. And students have to do them to get credit for the class.”

The way assignments are graded are almost identical to Lincoln’s policies.

“I don’t think it’s looking as good as in person schoolwork, some of the teachers kind of struggle with technology. Some of the content isn’t getting completely covered. But I do think that we are being able to learn what we need to learn,” says Accetta.

California issued a state-wide shelter-in-place about six weeks ago, and although most people take social distancing seriously, there are still people who disregard the rules.

“There’s like, there’s groups of people who are still hanging out, but just within that group,” Accetta says. “Specifically, I think track runners, because they’re still during workouts together.”

Accetta has been biking outside, where he has witnessed several social distancing issues.

“When I go by popular trails, I sometimes see a bunch of cars by each other for people who are exercising,” says Accetta. “That can be a little bit concerning because they’re not six feet apart all the time.”

Mental and physical health, as well as family time, have been the main focus for Accetta. His older sister, Kendall Accetta, graduated from Lincoln last year.

“It’s been nice because I’ve had a lot of time with my family, sometimes a little bit too much, but it’s been good, my sister came back from college. I’ve actually been exercising a lot more than I have recently, just with all the spare time.”

GEORGIA
Sophomore and former Lincoln student Ryley Kees moved to Buford, GA in December of 2019, and is experiencing school closures similar to Lincoln. Georgia Governor Brian Kemp announced that on April 24 the state would begin reopening, giving many protestors the validation they’ve been fighting for across the state.

Schools remain closed amid the possible reopening, and students are practicing distance learning for the rest of the school year, which ends on May 15 in Buford.

“Right now, school is getting up everyday and starting to do my DLD work, or digital learning day. Everyday I have to do work in every one of my classes, seven of them. They claim each class should take thirty minutes, but in reality each class takes a little bit longer,” says Kees.

The schedule that Kees follows for school is like Lincoln’s, but their grading system is different.

“Finals are [May 4 – May 8], but it’s not pass/fail, still letter grades, but there has been talk of teachers grading on a curve,” says Kees.

Kees’s recent arrival in Buford mixed with the pandemic has made for an interesting experience acclimating to her new home and making friends at her new school.

“Not being able to get out of the house has been really challenging, I feel trapped at times. I just miss my friends and even school. It’s especially hard since I just moved here and it’s altering how I’ve been adjusting to the big change of moving. It’s really frustrating that this is all happening right now, but I know it’s affecting everyone,” Kees says.

Kees has been doing things to stay positive and keep herself busy.

“I’ve been writing a lot, and staying close and connected with my family. I’ve also been going on a lot of runs and working out, trying to get outside as much as possible since the weather has been really nice lately,” she says.

Across all of Georgia, there have been 24,865 cases and 1,036 deaths as of April 28, according to the Georgia Department of Public Health. Although their numbers are so high, many state government officials are considering a re-opening of the state to boost the economy.