The impact of COVID-19 in Portland: A gallery 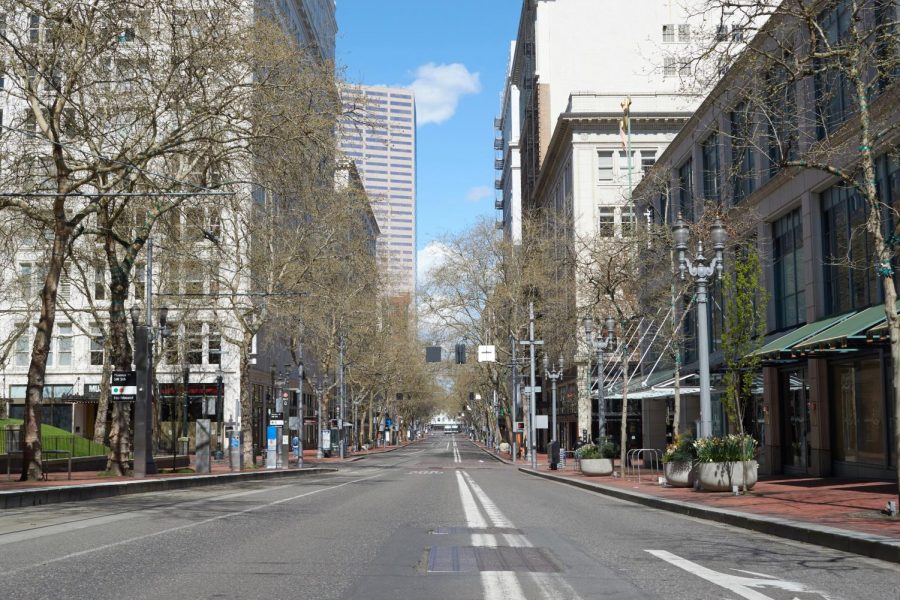 COVID-19 has affected every U.S. state, with over 1.2 million cases and almost 70,000 deaths, according to the Center for Disease Control and Prevention (CDC), as of May 4. In Oregon, over 100 people are dead and almost 3000 have contracted the virus. The virus has had a major impact on the national economy, with Oregon not immune to its effects.

So far there have been two realities to the coronavirus quarantine in Portland, one of which is empty businesses, streets, shops and restaurants. However, the city’s parks, trails and pathways still feel somewhat busy with Portlanders hoping to escape from the routine of their lives indoors. In addition to the quiet desperation that resides in most citizens longing to get out of their houses, a minority protests the stay-at-home orders. But Portland remains on lockdown.

Look below to see iconic Portland locations during a bizarre year which will no doubt live in infamy for years to come.
Downtown Portland
Gas prices have plummeted everywhere, and Portland is no exception. Although those who are still driving may enjoy this side effect of quarantine, it is an indication of the financial toll this pandemic has enacted onto worldwide economies. As Portland streets feel like ghost towns, restaurants are empty, bikes go unridden, and museums and shops go unvisited.

Northwest Portland
NW 23rd Avenue is the epicenter of Northwest Portland. All the same, it has succumbed to stay at home orders just like the rest of the city. Small businesses have been hit especially hard in Northwest. While so many Portlanders have already lost their jobs, many more fear that some of their favorite local restaurants and businesses will never recover.

The Waterfront
While visits to the waterfront have declined significantly since March, many Portlanders are still taking advantage of the sunny weather and sparse crowds. Homeless citizens still reside on benches along the Willamette– most without masks– but it has yet to deter others from passing by.

Portland’s Parks
Parks all around Portland remain peaceful. Despite being strangely crowded, the “six-feet” guidelines help ensure that Portlanders respect the privacy of others in very public spaces.