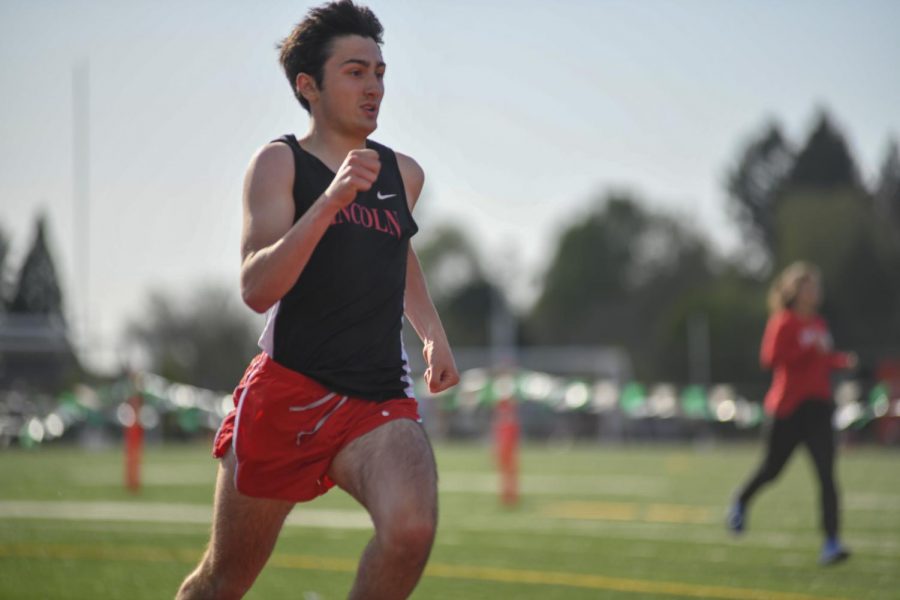 Senior Ethan Harper runs a 400 meter dash at Wilson during his junior year.

The 2020 spring sports season will forever be remembered as the one that could have been.

For senior Ethan Harper, a canceled spring sports season means a lost opportunity for a state title. Harper was the Portland Interscholastic League’s 800-meter champion in 2019, and he had high hopes for this season as the third-fastest 800m returner in Oregon’s 6A division. But any hopes of being crowned the state champion at Hayward Field in May were thwarted by the statewide stay-at-home order which canceled all spring sports.

“It felt incredibly strange and anticlimactic finding out that I would not be able to run for the rest of the season,” said Harper. “I usually think of… the awesome feeling of being with your team after the culmination of a season’s worth of work. Not having experiences like those, in fact, [will be] the hardest part of the cancellation of the season.”

“We all believed that practices would continue after spring break. We weren’t even discussing the possibility that the season would be canceled, because we wanted to be prepared if it did continue,” she said. “Our coaches were so supportive and made sure to check in on us on not just our training, but also our wellbeing and mental health.”

The Oregon Girls Lacrosse Association (OGLA) announced that the season was canceled on April 8th.

“I feel strange that there was such an abrupt end and I have been thinking about it a lot. We never had the opportunity to play a game, so it really felt like the season hadn’t even started,” said Douthit. “It still makes me sad to think about and definitely isn’t something I’ll be able to move past very easily.”

Luckily, Douthit will have another year to comp

ete for Lincoln. But for others, their high school careers were cut short without much time to process what was happening.

Senior Jake Leitgeb, who plays baseball, was excited to see new players be able to step up to the plate this year.

“As a senior, you always want to leave the program in a great place so we as a senior class were really focused on pushing our knowledge and experience onto some of the newer guys in order to help them learn and get better every day,” said Leitgeb.

Leitgeb found it difficult to cope with the end of the season, especially in March during what his teammates and coaches believed would be their final practice.

“We tried to… make the most of it as in the back of our minds we knew this could potentially be our last day out on that field together. It was really hard walking off of the field after practice,” he said. “A group of us seniors kind of stopped and reminisced on all the memories we had made out there on the field the past few years.”

Leitgeb will continue his baseball career at the University of Washington, which made this season’s cancellation easier to move on from. However, when he heard of the season’s cancellation, his thoughts went to his fellow seniors– his “brothers,” as he affectionately refers to them– who won’t get the same chance.

“To have the opportunity to play their final year of baseball as a senior and to have that stripped away from them is awful,” he said.

It might be months until sports return, as Governor Kate Brown has extended Oregon’s State of Emergency to July 6 on May 1. In the meantime, athletes have been attempting to keep themselves occupied even without a uniform routine.

“I’ve been following a workout schedule and conditioning like I would in season. At first, I was doing it to maintain my fitness for the season, but after I learned that it ended, I continued to follow these workouts because it really helps with my mental health, and gives my days some routine,” said Douthit.

Leitgeb has focused on his baseball skills and general fitness.

“I [want to] put myself in the best position possible when I arrive on campus to compete,” he said.

Harper will continue his athletic career in the fall at the University of Chicago running cross country. In the meantime, he has been occupying himself during quarantine by running without the stress of competition.

“I have been running without specific race or time goals in mind, and I feel that this has taught me a lesson about exactly what running means to me,” he said. “I have not had as much to do and so the happiness that I get from my runs has become even more noticeable to me.”

While the quarantine has crushed the goals and dreams of so many athletes who were hungry to compete this year, it has also taught valuable lessons.

“I think I’ve definitely learned to appreciate every part of the season, even the tough practices when it feels like nothing is working. Just having the time with the other girls on the team, sharing the same love for the sport is something I’ve really been missing,” said Douthit. “It makes me miss the hard moments of conditioning, and amazing moments of winning hard games and seeing all of our hard work pay off.”

Leitgeb agrees with this sentiment.

“One thing I have learned from the cancellation is that you can’t take anything for granted and that you have to take every opportunity you are given– in this case, time out on the field with friends and teammates– and truly make the most of it because you never know when it’s going to come to an end,” he said.

Though some athletes’ high school careers may have ended abruptly, they will not forget their years spent competing for Lincoln.

“I am very grateful for the time I had with my team and for the constant support that my coaches have given me. I have learned lessons about pushing myself and self-advocacy from my races and my coaches, and I am happy knowing that I am able to hold onto what I have learned,” said Harper.