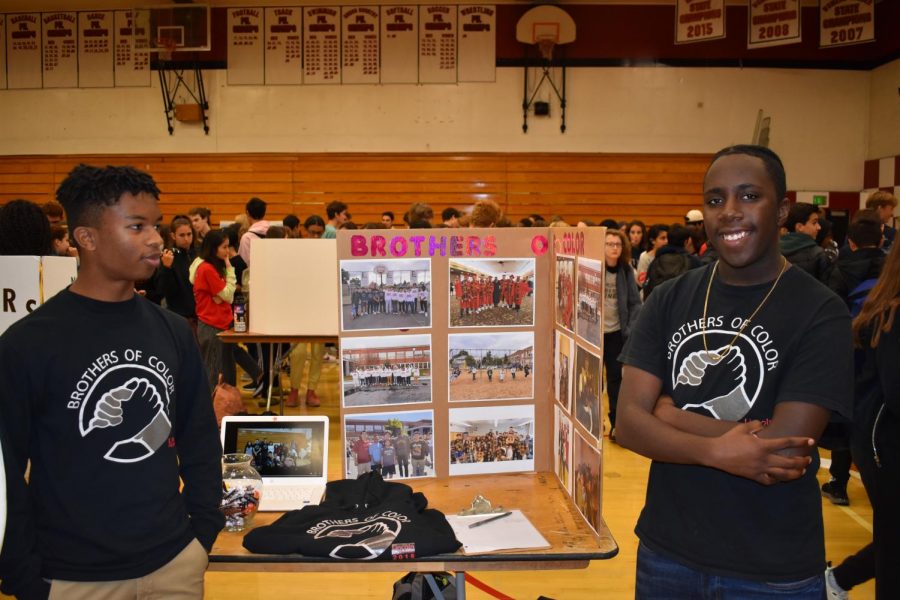 Senior Abani Neferkara and junior Zhykaire Rivers represent Brothers of Color (BOC) at Club Fair. BOC is a cultural affinity group at Lincoln High School that works to create a stronger community for people of color. Other non-affinity groups have been working to expand their base.

Feeling a sense of safety and community is why many high school students turn to clubs. Others choose to join clubs as a way to support their friends or classmates. But some students and advisors believe that certain clubs function best for their members when all participants are members of a culturally specific group.

According to the PPS Student Rights and Responsibilities Handbook, a club is “a group of students that meets at a regular time, shares a common interest, or wants to provide a service. The club must… be open to any student.” Although administration members agree with this rule, they believe that, in certain cases, providing a safe space for individuals is more important than including everyone.

“Really, [all clubs are] open to anyone, but I have found that kids have been respectful to those of the club [when members explain what the goals of the club are], which is typically offering a safe space for a group of students,” says Vice Principal James McGee, the adviser of Brothers of Color (BOC) and Black Student Union (BSU).

BOC is an affinity group, a culturally specific community of people who share common experiences, that was originally created to provide a safe space for male students of color to have conversations about things that affect them in their communities, both in and out of school.

“When you have a person there that is not of color, it changes the conversation,” says McGee.

Senior and co-president of BOC, Abani Neferkara, feels that the club has been impactful to him throughout high school due to its strong sense of community.

“I think it’s a really strong sense of community since, obviously, Lincoln’s very majority-white, so just having a space where I can talk to other males of color, and listen to what they’re going through and connect with them on the same sort of issues that we face here at this school has been really impactful,” says Neferkara.

Certain members of Sisters of Color (SOC) agree that the communities created through affinity groups are important.

Other non-affinity groups are taking a different approach. The club leaders of these groups have been working hard to gain more members.

Crandell is also the president of the Gender Sexuality Alliance (GSA). She has been working to extend the reach of the club to everyone, no matter how they identify.

Similar to GSA, Students Active For Ending Rape (SAFER), a group that gathers to discuss rape culture in the United States, is an open club. Despite this, SAFER has faced challenges with encouraging male-identifying students to attend.

“For our club, a lot of people who haven’t been sexually assaulted– [most] of the time male-identifying people– would prefer not to go because they don’t think it affects them at all,” says Tucker Davis, one of the leaders of SAFER.

Davis believes it is important to create safe spaces for certain affinity groups, such as BOC and SOC.

Like SAFER, PERIOD, a club dedicated to educating people about menstruation, is open to everyone, but male attendance has always been fairly low due to the stigma around menstruation. The club is working to combat this stigma in order to get their message heard.

“In the beginning, it was just me there,” says Holden Kilbane, one of the social media and design chairs of PERIOD. “But I got some of my friends to start coming. They thought it was really awkward. And that seems to be common… But if there’s anyone we do want to come, it is non-menstruators and people who aren’t educated about the subject so we can educate them then reduce and hopefully get rid of the stigma surrounding you.”

Kilbane thinks that both non-affinity and affinity groups are necessary.

“Overall at Lincoln, most clubs try and tend to be inclusive to anyone who wants to join them…, [but,] obviously, [Lincoln is] a super white school and clubs for minority groups can help create a sense of community for those people,” says Kilbane.

While some students feel that certain clubs should be open to everyone, others feel that some clubs are necessary to give students voices and a safe space to have conversations about the issues facing their community.

“We need to feel like we have a voice,” says Crandell. “Sometimes the only voice we have is within our own community.”