Lack of field space causes inconveniences for Lincoln sports until 2023 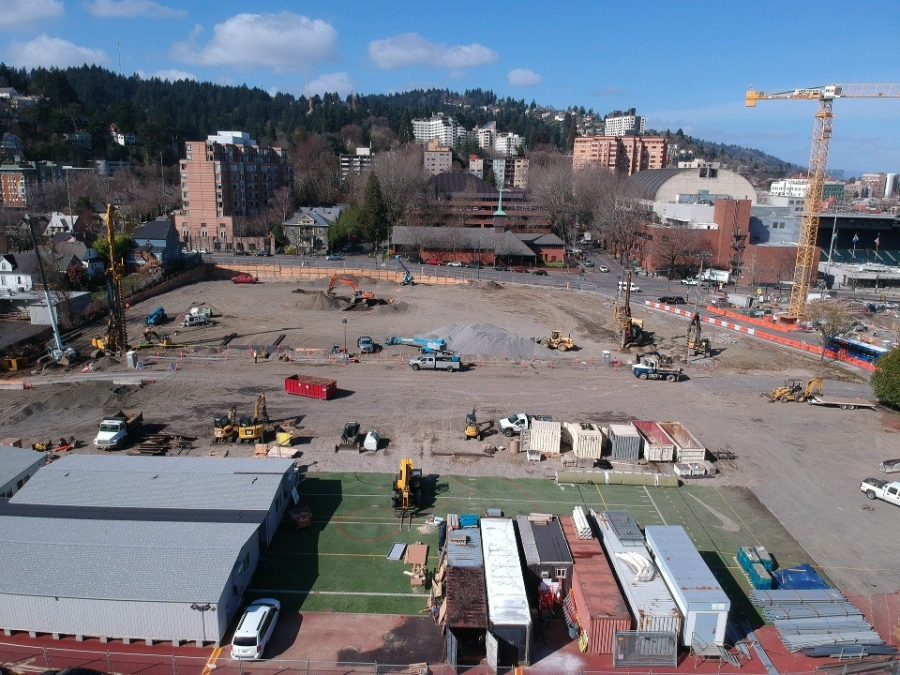 A birds-eye view of the construction over the remnants of Mike Walsh Field, where the new Lincoln High School will be built. The lack of field space has meant sports have resorted to alternate practice locations including Wilson High School, Rieke Elementary, and West Sylvan Middle School.

The majority of players on sports teams have already played the final home game of their high school careers.

Lincoln’s rebuild has been long anticipated, and with it comes high expectations for the future.

The future building is expected to be six stories and the scheduled completion date is fall of 2022. The new school will have many amenities not afforded to the current building and will contain significant improvements for the future.

However, this upgrade comes at a cost. Lincoln will not have a track or field until 2023 when the current freshmen are seniors. There is no field space available, meaning outdoor teams will not be able to hold practices or games at Lincoln.

As a result, there have been several changes made to sports schedules, including different practice times, locations and frequencies.

All lacrosse teams have been moved to Rieke Elementary School’s field, four miles away and next to Wilson High School.

“Because we don’t have a real field, there will be no home games for lacrosse,” said Ella Douthit, a junior on the girls’ varsity team.

While most sports finished their seasons in the fall and winter and didn’t have to deal with the consequences of the rebuild this year, spring sports were forced to reconfigure their practice schedules. Chief among these sports was track and field, as the lack of practice space has meant several different locations and times for practices.

Going forward, the area targeted for added field space has been West Sylvan Middle School. The plan was started over a year ago and the original plan was to turf the West Sylvan field and add lights by this summer.

“We got some pushback from that,” Russell said. “West Sylvan is a really tricky school because it is a Portland Public School in the city of Beaverton, and there is a small park owned and operated by Tualatin Hills Parks and Recreation Department.”

As a result, the new plan is to add lights to West Sylvan this coming summer and turfing and drainage next summer. This will allow football and soccer to hold their practices at West Sylvan, but they still won’t be allowed to hold games there.

While track and field’s numbers have decreased after being hit hard by the construction and lack of field space for throwers, jumpers and runners, its turn out before the COVID-19 quarantine was higher than expected. We [averaged] 160 kids showing up to Wilson, so it’s been awesome,” said Eric Dettman, head coach of the track and field program.

This isn’t to say that it has been easy. There have been extreme adjustments that have been made and some programs have been hit harder than others.

“This year, our practices [were] scheduled for 7:45-9:45,” said Douthit. “It is really hard to get to bed before 11 when practices are this late…it has affected my focus and makes it so much harder to get to school on time.”