From script to stage 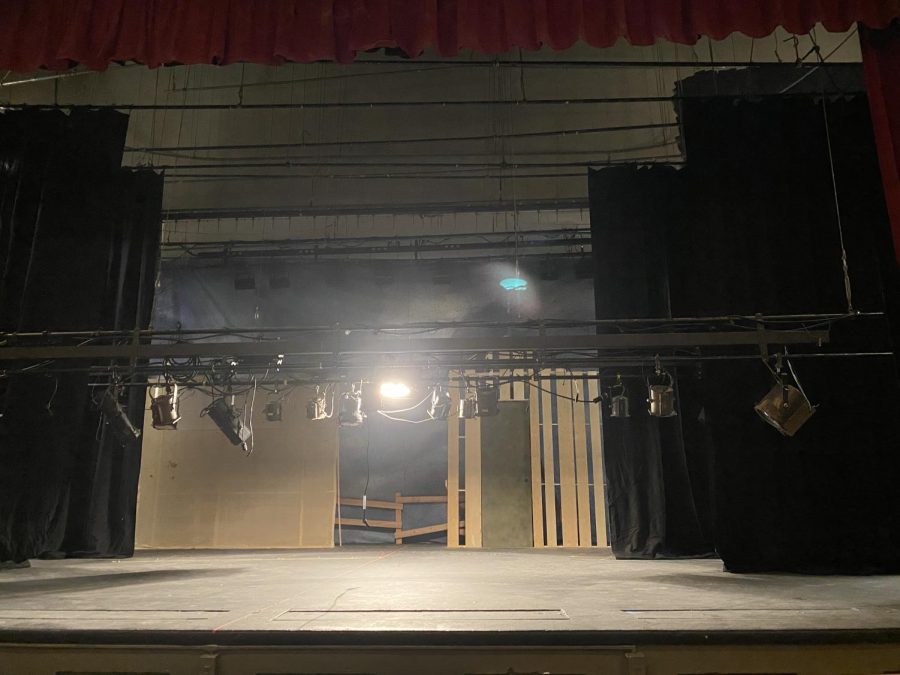 A photo from the set of Lincoln's production of "Fiddler on the Roof." The play has currently been postponed indefinitely.

UPDATE: With PPS extending Spring Break and canceling all non-essential activities due to COVID-19, rehearsals will be halted. The following article was the former plan for the drama department’s production for “Fiddler on the Roof.”

Theater productions have a long history at Lincoln. From the annual student-led PopCycles to other stage productions, performances are held throughout the year at Lincoln. When the audience sees a production, they are seeing the final piece after weeks of hard work. So how does a theater piece go from an idea to production?

First, a play has to be chosen. The PopCycles fundraiser and the New Works Festival are done annually. Jim Peerenboom is the advisor for plays at Lincoln and this year, he decided to add a performance that was created by the IB Theatre Showcase. The last show of the year typically alternates between a musical and a student-directed one-act festival.

Peerenboom chooses plays based on how well it fits with the plays the department has put on over the past three years. This allows students to get a good variety of experience by the time they graduate.

“Other factors that come into play: What does this play have to offer our students [and] community, what is the cast size, are there unique roles that could be hard to fill [and] how much it will cost,” Peerenboom says.

The production cycle for performances is relatively long. For “Fiddler on the Roof”, the Drama Department’s upcoming play, auditions for roles began at the end of the first semester.

Auditions often entail cold readings of the script, demonstrations of movement and improvisation abilities, how well students take direction and often, performing something the students have been asked to prepare before the audition. Student directors are chosen based on what they want to direct as well as their qualifications.

Props and costumes are frequently chosen based on what is listed in the script. However, slight alterations are sometimes made in order to have the production match the time period in which it is set. This leaves room for interpretation for props and costumes in the plays.

Students put in hours of work both after school and on the weekends in order to bring the performances to the stage.

“Fiddler on the Roof” has themes that connect to everyday life. Senior Dina Ross is playing Yente, the matchmaker, in the play.

“Family, love, acceptance, tradition are still themes that are incorporated in our lives in some way or another. The musical can help us think about how that fits into our life,” says Ross.

Members of the production believe that theatre is an important part of the education Lincoln provides its students.

“Theatre and the performing arts are a necessary ingredient in being a well-rounded student and so they are very important to Lincoln. To succeed at Lincoln has historically meant to succeed at being creative, part of a larger group, empathetic, well-spoken– all things that theatre can provide,” says Peerenboom.

Junior Kiki Locke-Harris is new to the Lincoln theatre program but has been involved in other productions with other groups. She plays multiple roles within “Fiddler on the Roof”, most of them involving dancing. Despite being in her first year of productions at Lincoln she says she enjoys the camaraderie it provides.

“[Theatre] gives, kind of, people a sense of belonging here at Lincoln,” says Locke-Harris. “This program is kind of a big family, and even though I only joined it like this year, I still understand that, like it kind of provides a place for a lot of people to just, come to after school and feel, like, safe.”

Over the course of theatre’s time at Lincoln, the productions shown and the ways they are produced have changed.

“When you look at Lincoln’s 150 years, you see a mirror of how productions have changed across the nation. We have higher production values now than in the past and shows continually need to engage the audience in a way that TV and film cannot,” says Peerenboom.