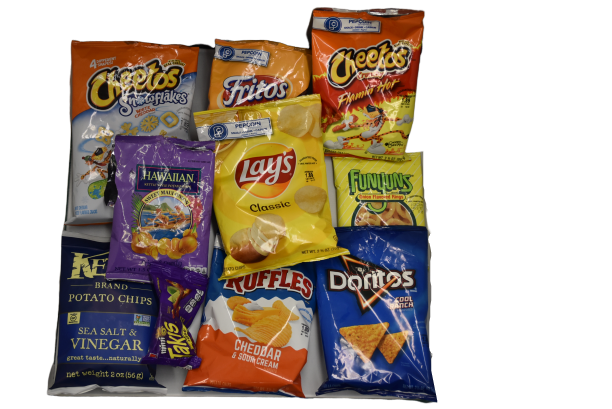 By Gabe Rosenfield and Anselmo Iturri

Gabe Rosenfield and Anselmo Iturri ate an assortment of potato chips and determined that Takis and Flaming Hot Cheetos meet their requirements to the highest standard.

This is the Cardinal Times Staff’s extensive list of the objectively best chips. Feel free to leave us a comment if you agree, disagree, or have any additions/

Lays: Packaging is classic, although fairly boring. Smells pretty good. It’s a thin, crunchy, salty and timeless chip. Amazing on a sandwich and a barbeque essential. A quality, crowd-pleasing chip. Nothing special. 5/10

Kettle Salt and Vinegar: Artisan in homely packaging. Natural. The smell packs a punch. The crunch is so good, and the flavor is aggressive yet inviting. Perfect ratio of salt to vinegar. However, your mouth gets raw after a whole bag. 6.5/10

Sweet Maui Onion: Packaged in a cute little bag. It smells like a factory; isn’t that nice? The onion flavor is really good, adding both complexity and sweetness. The aftertaste is a little odd, but it’s important to keep in mind that the taste is acquired. 4/10

Funyun: The packaging is sort of funny. They’re called Funyuns and they smell like old shoes. The shape is cool, they’re light, they’re airy, and the flavor is perfectly salty with a little onion. Won’t make your mouth raw, but vegetable oil gives it a slightly weird taste. Archie: “I LOVE FUNYUNS!!!” 7/10

Ruffles: The packaging is gross and dumb. Why did they put sour cream on a block of cheese? It’s unsettling. Smells like a bowl of two-day-old dip. The size of each chip is enormous. The flavor is really good, but the cheese feels fake. Fake cheese does taste kind of good though. 7.5/10

Fritos Chili Cheese: The packaging is disgusting. It looks like cheese and feces. It smells really good and tastes phenomenal– almost like camping. Really good and interesting flavor with a hearty crunch. A bit too much salt. 8/10

Doritos Cool Ranch: THE PACKAGING IS SICK and the logo is AWESOME. It smells like cool ranch bliss. This is what I like to munch on after a long day of skiing. A perfect amount of spice and salt, and a perfect crunch. It lights up your tastebuds and is every kid’s lunch box dream. 8.5/10

Takis: Packaging is lit, the shape is lit and the flavor is lit. it smells pretty bad, but tastes really good. Finally, a truly spicy chip. It’s an adventure to eat with its finger-licking spice. SURGEON GENERAL’S WARNING: WILL INDUCE HEARTBURN! 9/10

Flaming Hot Cheetos: The Mascot is literally a cheetah with shades, kicks, and fire coming out of its mouth. That’s dope. They smell good and are heavy. They appear to have a fierce look. The taste is amazing; it’s spicy, it’s crunchy, and the flavor is on point. Still less flavor than Takis. 9/10

Snowflake Cheetos: Same cheetah as before, but this time on a snowboard. Dope, but smells like throw up. The chip shapes are cool, but they’re too light and have a weak flavor. However, It’s a rollercoaster of taste. At first, it’s bumpy and boring, but it reaches a climax, becoming an exhilarating chip. Love it or hate it. 5/10