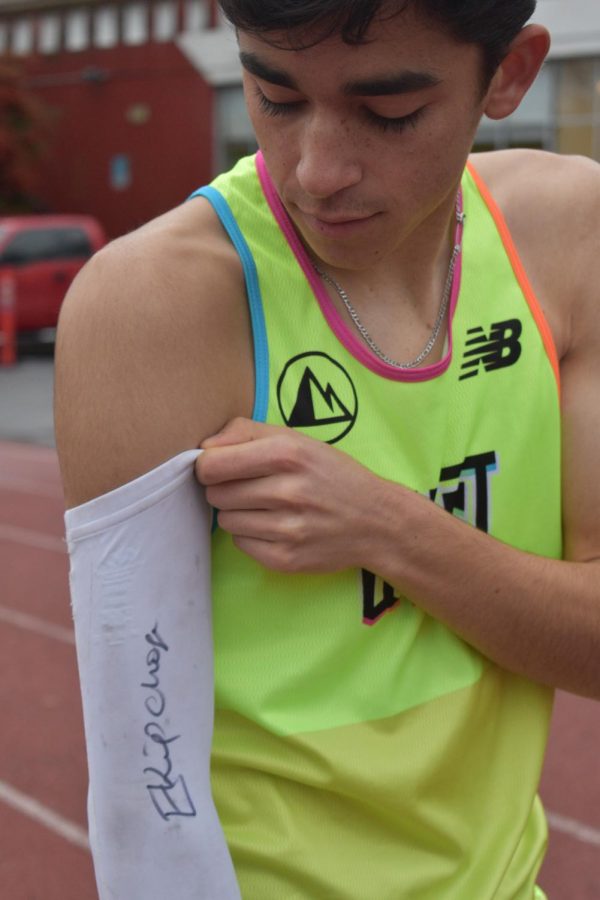 Althouse suits up by rolling up his signature arm sleeve, signed by marathon world record holder Eliud Kipchoge of Kenya.

Mateo Althouse isn’t one for speeches. But with his races this December, he said everything he needed to.

Althouse, a junior at Lincoln, moved to Portland from Chattanooga, Tennessee, in eighth grade. Little did he know, coming to Lincoln would be one of the best things for his running career.

“Portland is a running town and a lot of people enjoy running here and [the Lincoln] cross country program is great… it’s just a really good time to be a Lincoln runner right now,” said Althouse.

When he first moved, Althouse had started to play soccer for FC Portland. An injury in eighth grade abruptly ended his soccer career.

“I just didn’t want to risk injury again by playing soccer, so I ran track my freshman year, and I just kind of never looked back,” said Althouse.

The sport changed his life. In his junior year, in only his second season of cross country, Althouse broke the five-kilometer record at Lincoln with a time of 15:15 and placed 15th at Nike Cross Regionals (NXR) Northwest Championship.

On Dec. 7, Althouse ran in the Footlocker West Regional Championship in Walnut, CA. He won the West region in a time of 14:53.

“It was kind of crazy. I went in with the mindset of just trying to place top ten, which I was really uncertain of,” said Althouse. “So to cross and feel the tape hit me first, I was in such shock and it really didn’t kick in that I actually won the race until about 30 minutes after. It was just such a weird day, and just so shocking. It was also really cool.”

When Althouse got back, he started training for Footlocker Nationals in San Diego, CA.

His hard work paid off. Althouse placed 27th at Nationals.

Where did all of this success come from? Some speculate that he draws strength from his several superstitions on race day, including wearing one arm sleeve signed by the marathon world record holder, Eliud Kipchoge.

“I am a very superstitious person,” Althouse said, smiling.

However, he credits most of his success to his work ethic and mental focus during training.

“I think that’s how you get to be good at racing…just learn[ing] to be mentally focused once you get into a competitive environment,” said Althouse.

Althouse is a leader by example and prefers to not be the most vocal during practice and meets. Despite this, he has clearly had a lasting effect on the Lincoln community.

“This community has been so supportive of everything and my teammates especially have been so supportive,” said Althouse. “I really appreciate everybody here for just creating such a great environment to be competitive in and at the end of the day, know that you are coming home to a lot of support.”

Although Althouse had many successful races in the past, he almost passed up on the opportunity to run at Footlocker West.

“I was debating going to the regional meet in the first place because I didn’t think I was going to qualify.”

However, his coaches pushed him to go.

“In the end, my coaches were the ones who told me ‘you need to go and just give it a shot and learn to race in that kind of environment,’ and I definitely am happy that I did that” he said.

“I know I’m going to train a lot more in the next year, and hopefully [I] improve a lot and see if I can make large improvements from the last time I raced and maybe do something special on the national stage,” he said.