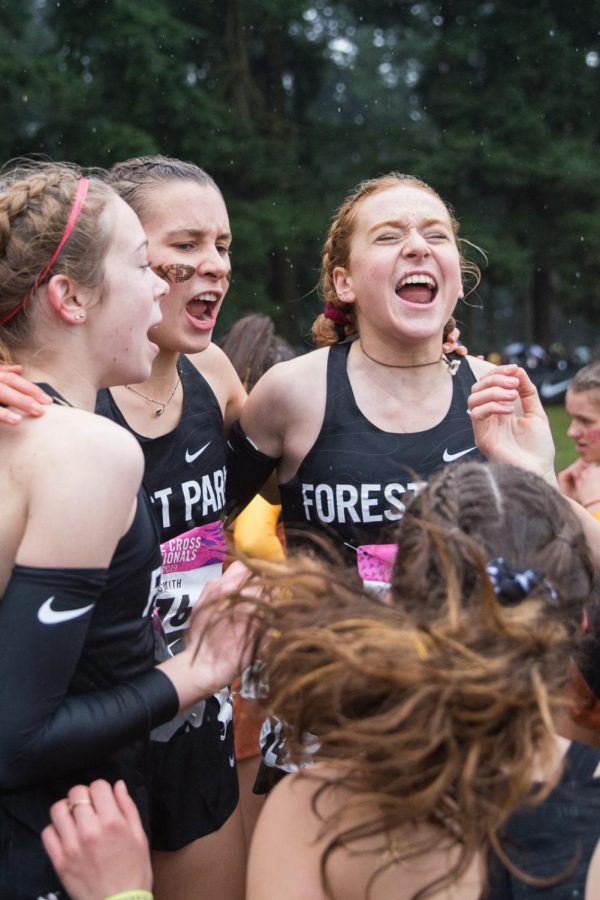 The girls cross country team finishes after celebrating an 18th-place finish at the National Championship meet. Going into the season, they weren't ranked in the top 50.

If you asked head coach Eric Dettman in the summer of 2018 if he thought the Lincoln girls’ cross country team would make it to the national championship meet, there might have been a sliver of doubt in his eyes.

But something was different about the team this year. There was a tenacity that he hadn’t seen in teams of past years. There was a special bond, a friendship that existed. They had stayed true to the mantra that Dettman had preached every day before practice: “Love your teammates.”

It could be seen in the warmups before races, where they would lay pennies in specific places on the course for good luck. It could be seen on the starting line, their faces and arms adorned with cardinal tattoos. It could be seen watching them cross the finish lines through a coalescent of sweat, tears, and hugs.

And, through the hundreds of miles of work put in this fall, the team made it to Nike Cross Nationals (NXN)- the National Championship meet a mere nine miles away from Lincoln, at Portland’s Glendoveer Golf Course. They are the first team ever from the Portland Interscholastic League to run at Nationals.

Though the seven girls who made up the varsity team fluctuated, the participating members were fully committed by mid-November: freshman Kate Peters, sophomores Riley Cash, Ellie Cook and Quinn Enyart, juniors Mia Kane and Sophie Smith, and senior Isabel Homsi.

The team was talented. But they didn’t make it on talent alone.

“The tight bond of our core group has helped me tremendously,” said Homsi. “No matter whether we are racing in an important meet, doing a hard workout, having a tough day at school, or facing any difficulties in between, I always feel like my teammates have my back.”

The girls sharpened their skills throughout the season, performing well at big meets such as the Warner Pacific Classic and Nike’s Hole in the Wall Invitational, eventually dominating Portland’s district meet. However, their expectations outperformed them at the Oregon 6A state meet, where they placed third behind the defending national champions of Summit High School- along with a close loss to Jesuit.

Looking at the results, the Crusaders may have seemed like Lincoln’s Achilles’ heel this fall. Head-to-head with their full varsity squad, Jesuit’s girls beat Lincoln’s four times. However, the team wasn’t going to let the results deceive them– in fact, they welcome the competition.

“Jesuit is definitely one of our biggest competitors and we have always set the goal of beating them, but it benefits us to consistently race with them whether or not we beat them,” said Homsi. “Competing with them throughout the season helped us because it added an extra level of competition and motivation.”

Dettman also believes that the team has succeeded in destigmatizing national rankings.

“We just try to keep everything in perspective, recognizing that the rankings are made by people across the country who haven’t seen us race,” Dettman said. “They don’t really know who we are and what we can accomplish.”

In fact, coming into the season, the girls weren’t even ranked in the top 50 nationally.

“Being unranked definitely motivated us to work harder, especially at regionals when we weren’t even [projected in the] top five,” said Cash.

Lincoln’s last loss to Jesuit came at Nike’s Northwest Regional meet in Boise, ID on Nov. 16, one of eight regional meets around the country. To qualify automatically for nationals, the girls needed a second-place finish.

Among a stacked field, they finished fourth.

Nonetheless, they kept training, aware that the Northwest region would have to receive two of the four “at-large bids” across the United States for them to qualify. Running at Nationals was a long shot.

But, after an agonizing two-week wait, the team got the call that they had made it. And if you ask any of the coaches, it didn’t seem out of reach to them at all.

“I was in the plane flying back from [Washington] D.C. I got really emotional because there’s so much work that goes into trying to prepare a team; there’s so much work for the girls themselves to be able to race at that level,” said Dettman. “When I looked at our body of work across the season… I felt we had a strong case [for the at-large bid].”

The girls were shocked but elated for the validation that came with qualifying.

“It felt amazing to prove everyone wrong… and to show people what we are capable of,” said Enyart. “Proving the rankings wrong was also so rewarding because all of that hard work paid off and we finally got recognized.”

Aside from Dettman, the girls have a large circle of support from people who have been in their position, such as assistant coach Marie Markham.

“I feel so proud that these student-athletes are representing Lincoln. It is a special group of people who work hard, are kind, respectful and well-rounded people,” said Markham.

Markham brought a burst of energy to the Lincoln running community in the 1990s when she won five state championships in cross country and track and field.

“It means so much to be back at Lincoln. I can’t explain in words how proud I am to be part of a program that I loved so much 25 years ago,” she said. Now, she’s inspiring the current girls’ team to exceed people’s expectations of them.

“Coach Marie is one of the best people I’ve ever met in my whole life. I adore her just as I know she adores all of us,” said Kane. “She has helped bring a whole new perspective not just on what it means to be a runner, but what it means to be a female runner and even just a female in general. She is an amazing role model; we are so lucky to have her on staff.”

Nike Cross Nationals were held on Dec. 7. As the weather predicted, it was a soggy, muddy day- perhaps the worst in NXN history since they moved the meet to Glendoveer in 2014.

“The boys [running at nationals] came back from their race covered in mud telling us that the course was a disaster, which definitely changed my mindset. It made the race feel less serious because the course turned into a swamp, but still, we knew we had to compete and try our best,” said Cash.

The rest of the team agreed.

“I realized that I might not be able to control the course, but the two things I can control are my attitude and effort, so that is what I [did],” said Smith.

But as any of them will tell you, it wasn’t about the race. It was about the experience of making it this far with their team, defying everybody’s expectations and simply getting the opportunity to toe the line with the best runners in the country- which now includes them.

“The brutality of the race in no way diminishes the fact that we qualified for NXN, and I am so proud of our team for making it so far,” said Homsi.

The Lincoln girls’ cross country team had a magical season; from meeting Eliud Kipchoge (the marathon world record holder), to breaking countless school records, ending the season by running at the national championship. This is the kind of year that they will look back for the rest of their lives. Upon asking them about a highlight of their season, it was hard to get a straight answer out of any of them.

One thing they’re sure about, though, is that they wouldn’t have wanted to accomplish this with anyone else.

“To toe the line with some of your best friends is so beneficial to the race itself. To know I’m working hard for more than just myself makes the pain so worth it,” said Kane.

Ask Eric Dettman in August if he thought the Lincoln girls cross country team would make it to NXN and have the fastest runner in school history plus a team of athletes who dedicated themselves to the program like never before, he might have thought they needed a miracle to do so.

But after all the magic that he witnessed this year in front of his very eyes, he has no doubts about it: miracles happen.