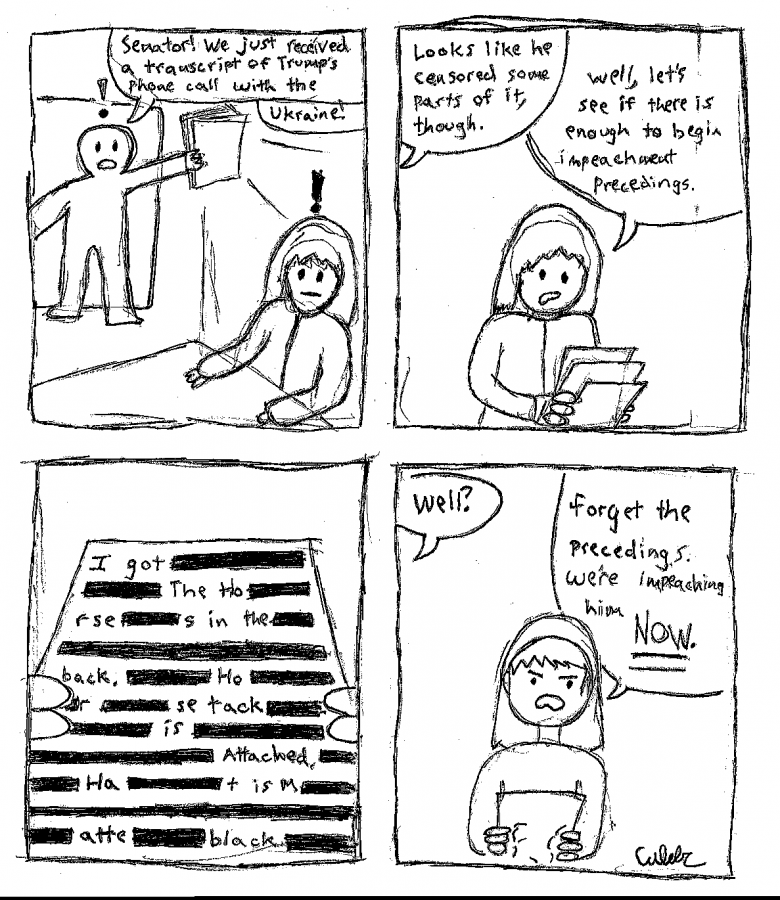 Editor’s note: Katlyn Kenney wrote about the impeachment inquiry in Vol. 123, Issue 2 of the Cardinal Times.

And so it continues.
On Oct. 31st, the House of Representatives voted 232-196 to officially formalize the impeachment inquiry against President Donald Trump.

What does this mean?

The vote was to set the guidelines and procedures for the inquiry, including the proper handling of public hearings, and what role Trump himself will play in the process. In other words, Congress is getting ready to potentially impeach the president. In addition, the hearings will be made fully public.

Who voted on this resolution?

The House of Representatives.

How did they vote?

The vote was almost a perfect split along party lines, with Democrats in favor of the inquiry, and Republicans voting against it. Only two Democrats voted against the inquiry: New Jersey Representative Jeff Van Drew and Minnesota Representative Collin Peterson.

Who is testifying in the hearings?

Fiona Hill–Former US adviser on Russia and Europe, replaced by Tim Morrison in August.

David Holmes– A political counselor at the U.S Embassy in Kiev. Worked with former ambassador to Ukraine, Marie Yovanovitch.

Kurt Volker– An American ambassador to NATO who served as a special representative to Ukraine until his recent resignation two months ago.

November 15:
-Yovanovitch testifies, says she felt threatened by President Trump’s statements about her after his call with Ukrainian President Volodymyr Zelensky.

November 19:
-Rep. Jim Jordan (R-OH) accuses Democrats of not trusting the American people, calls the impeachment effort a “coup”
-Rep. Sean Maloney (D-NY) calls for a return to “substance” in the hearing, criticizing Republicans for not discussing the accusations directly.

November 21:
-Fiona Hill testifies that Trump wanted the Ukraine to investigate the Bidens.
-Rep. Jordan says that Holmes is providing no new information and repeatedly interrupts others.

What will happen if Trump is impeached?

Contrary to popular belief, impeachment will not necessarily involve the President leaving office. For example, in 1998, then-president Bill Clinton was impeached on counts of obstruction of justice and perjury, yet remained in office for the rest of his term. In order for Trump to be removed from office, he would have to first be impeached, and a second vote would be held in the Senate to determine whether or not he should be removed from office.

What do people at Lincoln have to say?

Political Economy and History teacher Rion Roberts believes that this inquiry is a necessary part of our democracy.
“I think that any time there is an executive overreach, it is important that it is addressed,” says Roberts. “In recent history especially, the scale of executive power has increased significantly.”
Miryam Onstot, a sophomore, is glad that the hearings are being made public.
“Because of the increased polarization in the media, what is said (in the hearings) can be twisted to fit a partisan role if it isn’t open to the public.”