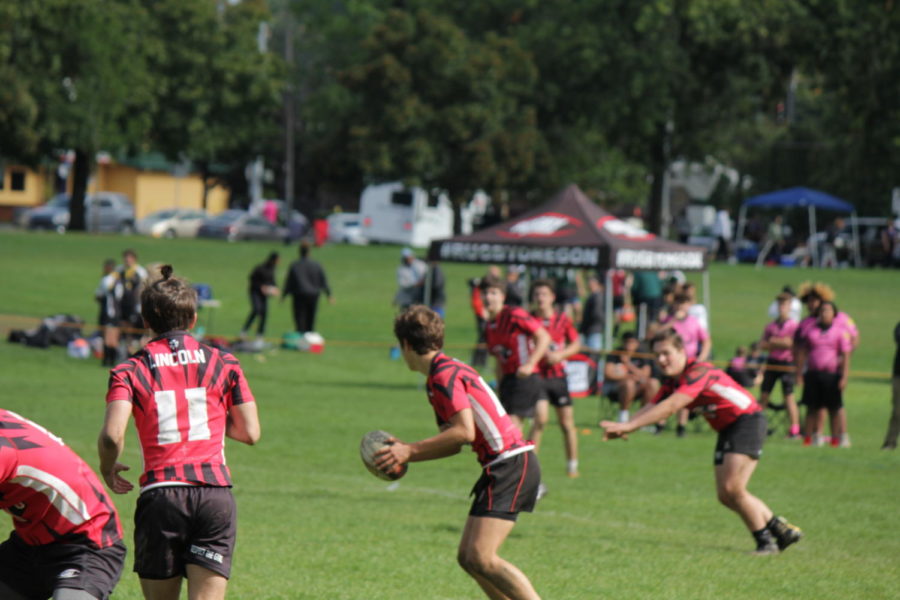 The Lincoln rugby team works their way up the field against Eastside Tsunami Pink. They won the game 33-0 on Sept. 28, 2019.

The “rugby” tab on the Lincoln Athletics page leads to “Error 404: Information Not Found.” Multiple editions of the Lincoln High School Yearbook do not even mention the team’s existence.

Traditionally, rugby has not been a part of American sports culture. This may be due to the fact that the sport originated in England and drifted mostly to countries in its commonwealth. This is probably a reason why for many students, rugby is not generally considered a part of Lincoln’s culture.

“It’s interesting because whenever someone asks you what sport you play and you respond with rugby, people usually have no clue what that is. Then you have to try and describe how it works and it takes a super long time,” says Eben Field, senior and co-captain of the team.

The team has just completed their fall season, which uses seven players on the field at a time. In the spring, the sport uses a 15-player roster. Players from sports such as cross country and football often join rugby in the spring.

“It’s not a part of the culture [at Lincoln],” says Neil Cooper, coach of the boys team, “but the players we do get are very passionate about it.”

Senior and co-captain Lee Cooper, whose New Zealand-born father and coach of the team introduced him to the game, attributes the lack of participation and knowledge of the sport at Lincoln to misconceptions about its safety.

“A lot of kids just hear about rugby because it’s not so well advertised in America so they hear that it’s vicious and dangerous,”Lee Cooper says.

He says players and coaches actively tackle this misconception.

“To an extent it is [dangerous],” says Lee Cooper, “but there are rules that keep the players as safe as possible. In practice, we learn tackling techniques that keep us…safe.”

Players describe the game as an intense, competitive and non-stop sport. While invigorating to play and a great way to release their aggression, they agree that the best part is the community the sport creates.

“Once the game’s over, it’s such a tight-knit group of people,” says Field.

Lee Cooper has similar feelings about the rugby community.

“I love playing so much but also because I love all the boys I play with,” he explains. “We just have fun, sometimes we’ll throw little parties here and there. Our community is pretty strong.”

Girls do not have a Lincoln-only option to play rugby.

Lincoln girls have been playing with the Grackles, a combination of students from Grant, Cleveland and Franklin.

“Last year there was a big wave of a bunch of girls at Lincoln who wanted to start a team,” Field says.

While Lincoln was not able to build up enough numbers for their own team, Eric Zimmerman, coach of the Grackles, says, “Lincoln girls are always welcome on our team.”

Players at Lincoln also encourage students of all genders interested in rugby to come out to a practice.

“All the kids who have just come to one practice have always had fun and always stuck with it,” Lee Cooper says.