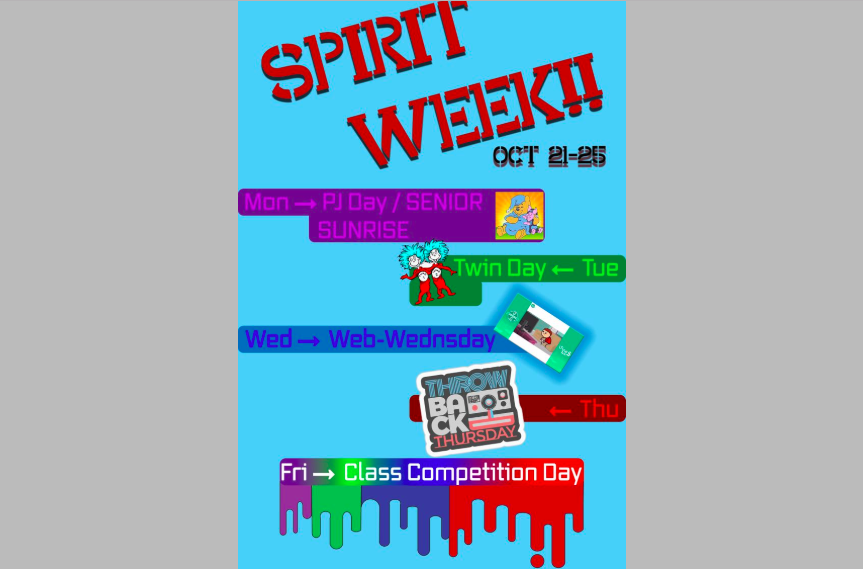 A graphic of the Spirit Week days, courtesy of the Trivory app.

Spirit Week is a time-honored tradition at Lincoln and the perfect accompaniment to Homecoming. Complete with student enthusiasm and support, few argued that the individual spirit days needed a makeover.

With the exception of Rave Day, all of the days were finalized by leadership and approved by the administration.

Alexa Marandas of Lincoln leadership informed The Cardinal Times that Wild West Wednesday and Rave Day were then disputed due to concerns within the class about the history and implications of racism in Western films and culture, as well as the promotion of drug culture by Rave Day.

Both days were eventually cut. Then the leadership teacher, Lisa Klein-Wolf, and a small group within the leadership class made the decision to also cut out Jersey Day, effectively replacing the three cut days with Twin Day, Web Wednesday (otherwise known as “Meme Day”) and Throwback Thursday (according to Marandas).

The inclusion and racism concerns about Wild West Wednesday and Rave Day are understandable. It’s also understandable why Pajama Day, a classic spirit day, was kept. However, Pajama Day’s inclusion does not make up for the leadership team’s lapse in judgment in creating the days for the rest of the week.

On top of the laziness that went into Twin Day, Web Wednesday and Throwback Thursday, the leadership team failed to solve problems that the administration saw with the original spirit days.

First, let’s look at Twin Day. While this day has been executed in previous years, it typically garnered low support. Rather than engaging full-school participation, Twin Day becomes confusing, because no one can stay constantly next to their “twin.” Similarly, Twin Day excludes people who may not have anyone to “twin” with. Finally, some students just don’t want to make the extra effort it takes to coordinate with someone else.

How is Twin Day, with its high potential to cause anxiety, better than including a popular day such as Jersey Day?

Additionally, the choice of Web Wednesday (“Meme Day”) is baffling. Teachers and the administration preach about how addicted students are to their phones and social media. Why incorporate social media culture into a week designed to celebrate school spirit?

Furthermore, leadership held a “Vine-watching party” in the gym on Wednesday (Vine was a short-form video service where users shared six-second-long videos they created). I could not fathom a more cringe-worthy attempt at Spirit Week publicity than a Vine-watching party. Giving students yet another reason to be consumed with social media is careless. It is commendable that the leadership team attempted to incorporate additional activities into the week for engagement; however, these changes are a swing-and-a-miss– by a long shot.

The decision to include Throwback Thursday also misses the mark. Centering an entire day around a term originating from a social media hashtag is irresponsible. The day lacks originality. and it is questionable why it was even considered, much less finalized.

Surely something much more fun and inclusive could have made the list. Why not Denim Day, or some other day that accumulated high participation in the past?

Spirit Week will never be perfect. Lincoln has almost 1700 students and it’s impossible to please everyone. I’m sure Lincoln leadership put effort into their decisions when creating the new spirit days and corresponding activities, but I still hold their inability to create refreshing new ideas or honor tradition against them.

I wore a Chicago Bears jersey during Spirit Week in silent protest of leadership’s decisions. I hope the students of Lincoln support this decision.

Views expressed in this article are the opinions of the author and do not necessarily reflect the views of The Cardinal Times.