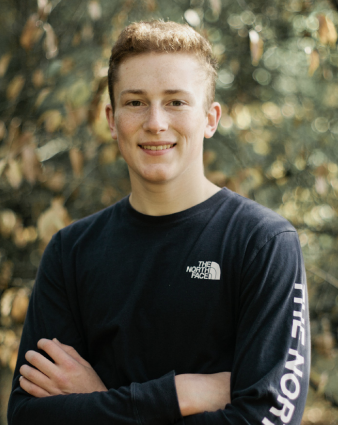 Daniel Lewinsohn has served as as reporter, Projects editor, Sports and Features editor and led the new role of Managing Digital editor his senior year.

Since his sophomore year, senior Daniel Lewinsohn has been a reporter – and, since the beginning of this year, the first Managing Digital Editor – for The Cardinal Times.

Over the past three years, Lewinsohn has witnessed transformative changes to the paper and its staff.

“The paper’s staff has grown a lot since I joined,” Lewinsohn remarks. “My freshman year there were less than 10 people on the staff. We’ve also had three different advisors throughout my time on the paper, which definitely shaped [it].”

This year, Lewinsohn has overseen The Cardinal Times’ growing digital branch, helping to create several podcasts on topics ranging from sports to art to film while being a frequent contributor to the Times’ website. Daniel’s devotion to journalism, however, extends far beyond the digital.

“I’ll miss [the most] […] having the opportunity to get out of my comfort zone and interview people,” says Lewinsohn. “Especially people I normally wouldn’t have the chance to talk to.”

A full-IB student, Lewinsohn’s interests aren’t solely limited to journalism. As a freshman at Colorado College next year, he plans to “explore different areas of the natural sciences” and spend time in the great outdoors skiing, backpacking, and climbing. Earlier in high school, he volunteered at the Desmond Tutu HIV Foundation in Cape Town, South Africa to study causes and preventative measures for HIV.

“It was an extremely rewarding experience as I got to work in a professional environment and explore an issue I’m passionate about,” said Daniel.

Lewinsohn is a member of Lincoln’s varsity soccer team and also plays the piano. As described by Cardinal Times editor-in-chief Sagarika Ramachandran, “[Daniel] is quiet, but he has a secret humor to him.”

Although Lewinsohn may be the Cardinal Times’ first digital editor, his interests and his future are grounded in the natural world.