Teachers reflect on their long careers at LHS 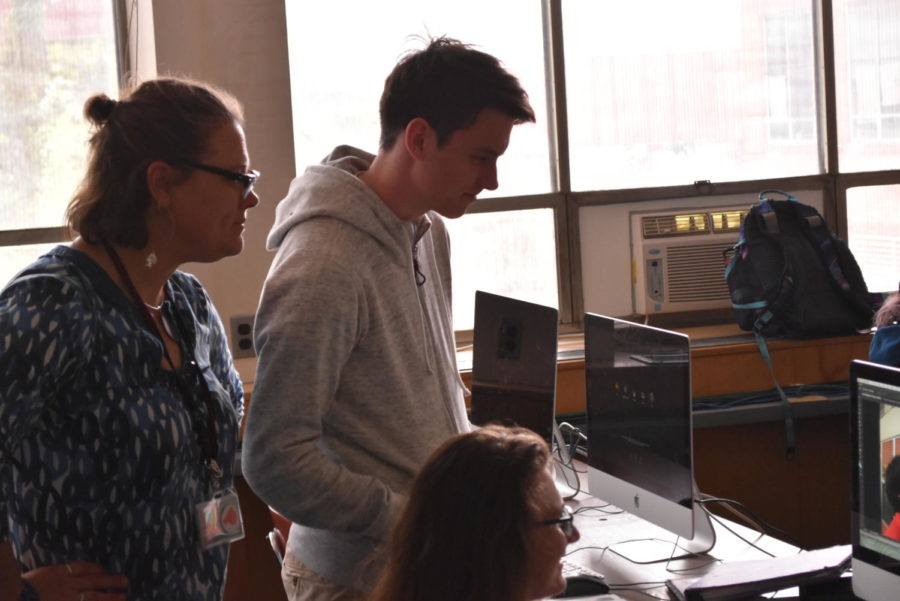 [One] thing that has changed is how much stress kids are under. That is HUGE. I think that Lincoln’s always been a little bit of a pressure cooker, but now I just feel like kids are so obsessed with IB and their class standing and where they are going to college; this idea that everyone’s lives are going to be ruined if they don’t get into the same graduation class. It just makes me sad to see that.

What has not changed that youthink needs to change?

Of course I’d like to see better mental health. This means less stress and less anxiety. I’d like to see less obsession around academic performance. I’d also like to see however, a more equitable school. Kids of color still experience racism here and micro-aggressions in a sense that they are not seen and they are not heard. Of course, that is true of society, but it is a change that I would like to see Lincoln reflecting a change on society.

Just like in life, you know. Cultures kind of change depending on the times. You know so, you get a group of kids that come in as freshman, and by the time they are seniors everything’s changed. Music change, you know, culture changes. Clothing change, styles change.

I would like to see consistency actually, not so much change. I think the way things are done, you know?

Just the way the school is run. I’d like to see that kind of be the same and not change so much. I guess the culture changes and you have to change with the times, you know, but the way things are run year to year is always fluctuating, and it would be nice if everything could just sort of stay the same.

I think it’s about time that we really think about student’s schedule and some flexibility that comes with that. There are plenty of studies to show that teenagers need more sleep, it’d be better for them to start classes later in the day, you know, some students might be morning students and other students aren’t. Really, having a schedule that’s more of a rolling schedule. Like, for example, some classes would start at eight, and then students with that schedule would end a little earlier as opposed to starting later inn the day perhaps and ending later. It’d be nice to have more of a flexible schedule to meet students needs. There are schools in Europe that have schedules like this, and I just think that we should always think big. We are moving into a brand new building, there are a lot of possibilities there, and I really think that if we always keep student’s at the center of our thinking, can we develop a schedule that are for the students?

I would say what has changed most is the access to technology and information. I feel like has pretty radically has changed and that has changed the degree of students interest. Like in art, it used to be really engaging but now everything is boring.

I think that’s a really tough one and that Lincoln is changing and evolving and moving forward. I think that understanding that IB is not for all students is something to understand.

I would say the culture of the school has changed quite a bit, mostly because of technology. I think that students have been very blessed with the ability to do different types of research then what kids started out with when I first came, we had pamphlets and books and magazines so technology and the level of work that kids are able to do I would say is the most impressive.

I think we are getting ready to make the biggest necessary move and that is the move of a new facility for us. This has served me well for the number of years I have been here but we all know there are a lot of things wrong with this building and we are definitely ready for a new one so I think that it will be great for students to be able to thrive in a bet- ter more conducive learning environment.

Oh my gosh, we were losing one or two kids a year to suicide, and people didn’t talk about stress and anxiety. I didn’t feel it the way I feel it now, but kids were just quietly killing themselves. But now we talk about it more so I feel it and people are aware of it, but all that talking helps get kids support plans who need them. I think it’s better that we’re talking about it but we’re all aware of it. Also, there were barely cell phones. Thirteen years ago, people had flip phones and they really weren’t a distraction. Social media and social bullying weren’t problems. So I feel like a lot of the stress and anxiety is coming from trying to stay on top of everything, do it, then post it, and then check out what everybody else is doing and then feel bad about it, and I feel that like I didn’t feel it before.

Yes. Everything’s really public and really competitive/ comparative and so we’ve added mindfulness to the school to help students try and stay present and focused and don’t worry about any negative self talk others are projecting or you are feeling because you’re comparing yourself to others or the standard or whatever.

What has not changed that you think needs tochange?

Well going back to what has changed, we have done a lot of work around ethnic studies, critical race studies, hiring more
diverse teachers, and that’s been a really good thing.

I also feel like our girls are a lot more empowered than they were when I first came here. I don’t even think we had a student body vice president in the first five years. Our girls weren’t running for office as much, they weren’t on class cabinets, we didn’t have a SAFER club, we didn’t have a feminist club. I feel like young women have become much more empowered. I used to talk to parents who said ‘I’m going to send my daughters to Saint Mary’s but my boys are going to Lincoln’, but now our girls are performing just as well as our boys. In the freshman class elections 21/23 applications were girls, and we have two co-presidents who are female, and we have female students involved in Future Business Leaders of America, so I feel like we’ve made a lot more growth in shared leadership.

Also, we had a Black Student Union, but there wasn’t Brothers of Color or Sisters of Color, there wasn’t an Asian Pacific Islander Student Union, there wasn’t a Native American Student Union. We had a GSA and they’ve always been great, but I think the empowered activities around creating a gender-neutral bathroom didn’t exist thirteen years ago. There also used to be a really strict dress code, and now there’s what I would say is a pretty nonexistent dress code, except for hate speech and drug and alcohol-related speech, so that’s really different. We really had fingertip-length and no bare shoulders, no bare midriff, and now just about everything goes. I’m conflicted on that. I’m worried that without some structure, we could either be offensive to each other without knowing it, culturally, or we’re not really preparing people for the workplace as much as we should be. But I know that the conversations were disproportionately directed towards our young women and that they felt body shamed. So I’m happy not to be having those conversations or to shame anyone. Shame is not a positive strategy, but I do feel like I wish there were a different way to help prepare students for the workplace.

I think technology. When I first started teaching we didn’t even have computer grading programs. We had paper printouts that we did our roll on, and so at the same time people had to be more accountable, because there wasn’t an automatic backup like if you lose your script in class, then there’s no more script versus ‘it’s online I can just look at it on my phone’. So the pluses and the negatives are that things are much more available to you, easier to get to you. On a snow day you can just type in a lesson plan to Google Classroom and keep going, but a lot of people have started depending on that and aren’t quite as able to be on top of stuff knowing there’s a backup.

Students have gotten more polite. Students regularly thank me at the end of class and this probably started in the last 10 years. Overall students have become more polite than when I first started teaching I think maybe because of my age. Kids in the hallway are nicer to each other (less sexist/racist/homophobic comments). In former times I had to regularly interrupt that sort of behavior and correct it. Kids are more accepting now than kids were 20 years ago. Students and teachers have made Lincoln a safer place over the past years for all variety of people.

Pep assemblies should be optional. The school should settle down when it comes to school spirit. Dividing every- one and telling them to yell Junior Power or Senior Power screams tribalism to me. Dividing each other into the groups pushes this idea of my group against the other group. We need to look more critically at the concept of pride. We should not be teaching students to value their class or their school above others. It’s this sort of mentality that eventually leads to nationalism. Get rid of the “color wars.” The title of this event is terrible in so many respects and it does not foster an environment of cooperation. If students don’t want to go to a pep assembly we can have rooms for study hall. Save the assembly time for those events that teach the values we hope to foster in our community, events such as the multicultural assembly.