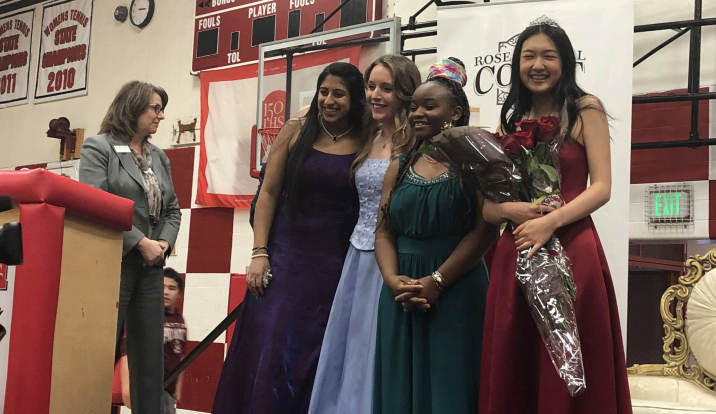 On Monday March 4, senior Sophia Zhang was crowned as Lincoln’s Rose Princess. Zhang is currently one of 11 students from Portland-area high schools who has been selected as a Rose Princess.

Zhang ran for the position along with seniors Rose-Marie Crawford, Loy Msafiri, and junior Anya Anand.

According to the Rose Festival website, “city leaders started the festival during the first decade of the 20th Century in order to put Portland on the map and brand it the ‘summer capital of the world.’”

Since its founding the festival has had students serving as “community leaders for celebrating values like volunteerism, patriotism and environmentalism,” according to the Rose Festival website.

Vice Principal James McGee, who currently runs Rose Court activities at Lincoln, has grown up loving and admiring the Rose Festival, parades and activities in the city.

He does note that “the whole festival celebration was very popular, and the rose festival court was part of it.”

Zhang also noted her and her family’s love for the parade, and says her sister was one of her main inspirations to run, as she was on court when she attended Lincoln.

“I was really impressed by the opportunities that it gave [to] young women,” she says. Zhang looks forward to traveling around Oregon doing community service, visiting schools, and learning from other young and diverse women in the Portland-area.

Additionally, all Rose Princesses will receive a $3,500 scholarship to the college of their choice according to Zhang.

Zhang also looks forward to the mentorship program that the festival provides. Every princess is partnered with a woman in the business world to receive coaching and make connections in the field.

McGee highlighted this part of the program as a key factor that inspired him to take the leadership at Lincoln. He notes that women haven’t achieved full equality, and having someone to “help navigate you through that field is super helpful.” McGee has a mentor himself which has been super helpful to help bounce ideas and talk to someone who can help support.

Zhang will not only work with her mentor, Gayle Evans (the Chief of Human Resources for Unitus), for the next couple of months, but will also travel with fellow princesses most of May. Following this, a Rose Festival Queen is chosen, who will keep in touch with the program even when they attend college.

In preparation for the main election, Zhang and the other court members had to apply, attend an interview day with several speeches and interviews with judges, speak in front of the school and were then voted by their student body. Although, McGee adds that the student vote doesn’t determine the winner of the Rose Princess, so it doesn’t become a “popularity contest” and is instead chosen based on merit and their community service.

This is one of many misconceptions that many Lincoln students have about the Rose Festival Court. Both Zhang and McGee note that some individuals at Lincoln have “the wrong impression of the court.”

“There are people who look at the rose festival court as a bygone era, as a pageant, [but] it’s not a pageant,” says McGee. According to McGee, there was a short time when males were included in the court, however, due to low participation, they no longer do. This year McGee noticed that female students were interested in participating, however, others were also concerned about perception from fellow peers.

“Empowerment for me is that every girl gets to decide what she wants to do without judgement… we should not be shaming individuals who do want to participate,” he says.

Zhang also sees this misconception among Lincoln individuals that the court is a “pageant” when in fact it’s meant to empower young girls.

“I understand the beauty pageant perception, but I was always able to understand it a little because of my sister. It’s more a scholarship and a way to support young women, and I think that view of thinking that it’s a beauty pageant is actually more detrimental to feminism and women as a whole, because we’re not supporting girls based on what their achieving and rather seeing this thing as a battle of beauty,” she says.

At the assembly, Lincoln alumni, Robin Marks, spoke about what the festival meant to her. Marks was the first African American Rose Festival Queen and was voted in 1980. Marks was also a track and field 200 meter champion and that year Lincoln won the state championship.

Marks and other speakers at the assembly shared a similar sentiment noting the aspects of community service, academics and mentorship in the program.