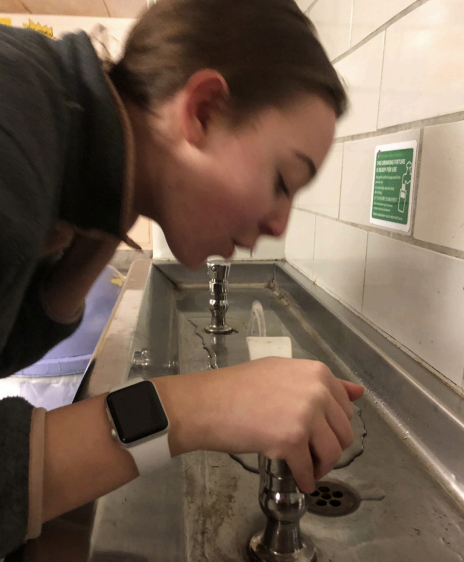 A student drinks from one of the several water fountain fixtures that Lincoln re-opened at the start of 2019.

The water coolers in the hallways of Lincoln are finally starting to disappear after nearly three years of their use due to the water fountains’ recent functionality.

Since 2016, many of the water fountains at Portland Public Schools were turned off due to high levels of lead or copper, but repairs over the summer of 2018 have finally yielded operating fixtures at Lincoln.

According to the Portland Public Schools website, in 2016 a team from the water company CH2M tested the water fixtures at Lincoln. Those above the action levels of either lead (15 ppb) or copper (1.3 ppm) would require replacement.

Actual repairs first began on Sep 1 of 2017, after a bond affording money to pipe fixes was passed by voters in May of that year.

By the time school began in August 2018, a majority of the contaminated fixtures in the Lincoln building were repaired by PPS-hired contractors and plumbers. However, the school “kept the fountains closed through the beginning of January to be certain of safety” and to run additional evaluations, said Lincoln business manager Jill Ross.

Currently, all but five of the twelve water fountains have tested lead and copper free.

Students at Lincoln are happy about the replacements but are looking forward to those final repairs.

“The fountains are nice, but the water bottle fillers don’t work and it’s impossible to fill up my water bottle at a fountain,” says sophomore Naomi Asbock.

Until all of the drinking fixtures are turned on, signage stating the status of each fountain has been provided by PPS.