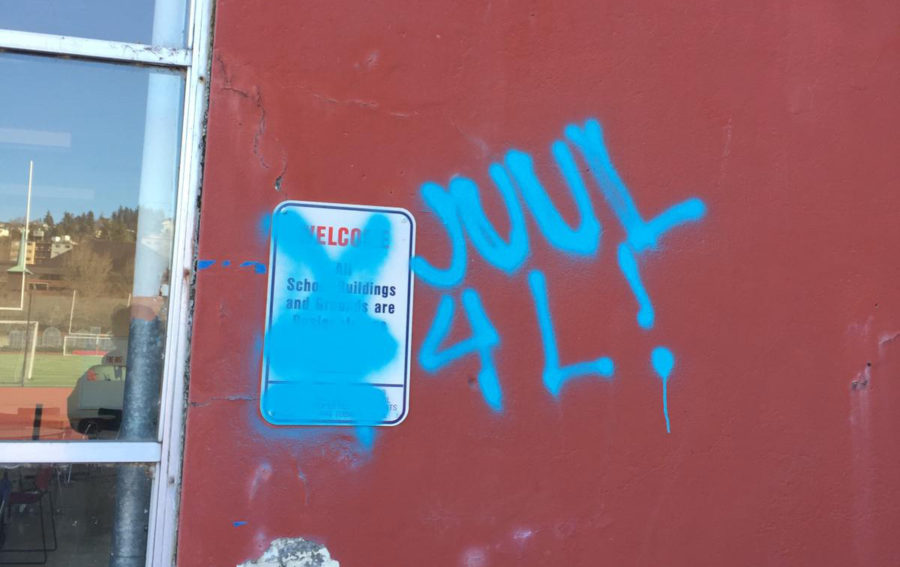 Graffiti on the wall outside of Lincoln’s cafeteria. The campus was vandalized multiple times this month with obscenities and drawings, which were quickly removed by the administration.

In January, on two separate occasions, spray paint was found on the outside of the school building.

On the morning of Thursday, Jan. 3, the school administration worked quietly and quickly to cover up the profane words and images depicted on multiple windows around the Lincoln building.

Obscene messages were spray-painted in four places on the outside of the building, on the windows at the end of senior hall, the windows on the front doors and the window to the choir classroom.

The person responsible for the vandalism may not face any discipline due to lack of resources, such as cameras or patrolling security, to identify them.

Vice Principal James McGee explained, referencing how infrequently vandals are caught, that “It’s not as often as we would like.”

“If [the graffiti] is outside of the building, it’s a lot more challenging because we have to figure out was it one of our students, a student from a different school; is it just someone who has too much free time on their hands?” said McGee.

Neither a suspect nor motive has been determined yet, but on Saturday, Jan. 12, more graffiti was found on the school building in the same blue spray paint signed “G”. This time, seven tags (a image or phrase used as an identifying mark) were found in four different spots on the outside of the school building.

The vandal(s) tagged the walls outside the cafeteria as well as its windows, the pillars near the front doors, the walls near the benches on the patio and the windows to the front office.

Students and administrators labeling the tags on the building as graffiti has become a source of disagreement in the Lincoln student body.

Some students believe that there is a distinction to be made between graffiti and vandalism, and that to label what was done to the school as graffiti doesn’t do justice to graffiti as an artform and method of self-expression.

A graffiti artist at Lincoln, who chose to remain anonymous, said “That’s not graffiti, that’s just reckless kids doing stupid stuff… this is what people are talking about when they talk about vandalism. That has no meaning, that has no expression.”