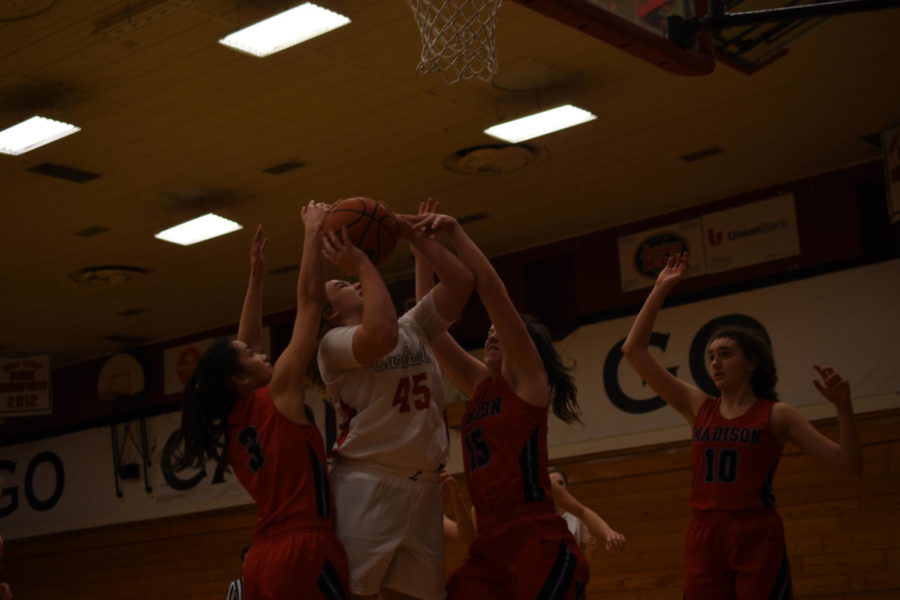 Charlotte Anderson drives to the basket during a Jan. 23 home game vs Madison. This is Anderson’s seventh season as a varsity athlete, her eighth and final season coming this spring during track and field.

Three and a half years, seven varsity letters- and counting.

Senior Charlotte Anderson has been part of both the varsity track and field team as well as the varsity basketball team since freshman year.

Anderson was born in Chicago and moved to Portland in 2006. She started playing basketball in sixth grade for West Sylvan at the encouragement of her father. She began participating in track during her freshman year after one of her basketball coaches suggested it.

Track and basketball were great ways for Anderson to create friendships.

“Almost all my friends play sports. So that’s how I made friends and kept them, is through athletics,” she said.

Anderson won the javelin throw at the prestigious Oregon Relays track and field meet last spring, beating out athletes from 27 other schools.

She also placed sixth in the state meet with a distance of 142 feet and 11 inches.

Anderson spends most of her free time outside of sports doing her work or studying.

“If we have practice for two or three hours, I don’t really think about school; I just kinda let it go all away, so I can focus on sports and get a mental break,” she said.

Along with being a dual-sport athlete, Anderson is committed to four IB classes; geography, Spanish, science, and math. She has been influenced by several teachers at Lincoln- including Timm Goldhammer, Emily Gaffney, and Melissa Johnson.

“They just told me that class is more than just a grade and it’s about learning,” said Anderson. “It helped me a lot to know that there was support for my grades and for me.”

Anderson has missed both of her brothers’ birthdays for the past three years. “It’s the pressure that Lincoln puts on all their students, especially athletes,” that creates the most stress for her.

Anderson spoke about her motivation for continuing to improve in her sports.

“Track is one of the hardest mental sports that there is because you might PR [personal record] your freshman year but not do it again for the rest of your high school career. You just have to know that sometimes it’s great to do better for yourself,” she said. “but you have to remember that you are a part of a team.” Anderson also said that a large part of this motivation comes from her track coaches.

For basketball, Anderson said that the team motivates each other; if one person is down, it brings people down around them.

“We just thrive off of each other’s energy,” she said.

Anderson has had three different basketball coaches during her time at Lincoln, which makes it hard to connect with them.

“But with track coaches, I see them and come up to me and ask me how I’m doing in school and it feels much more connected. There’s just not as much pressure [as basketball] for you to win,” she said. “It’s more about how you are as a person on the track team.”

Anderson had to overcome injury in her sophomore year after hyperextending her right arm during basketball, which caused nerve damage throughout her arm.

“That affected me a lot because I only competed for four weeks in track. I barely made it to state that year,” she said.

Anderson is excited about the current basketball season and upcoming track season.

“My goal for basketball is to help the young players so they’re more comfortable with a varsity-speed game and really work with them because they’re the team after we’re gone,” she said. “I’d really like us to focus on one team at a time.”

While the basketball team has started with a losing record, Lincoln’s star thrower is excited about the rest of the season, as well as the track team’s prospects of winning the state meet.

“I think our women’s’ track team is really good this year. I think that there’s a chance this year that we’ll place at state and potentially get first- if we all run our best and PR,” said Anderson.