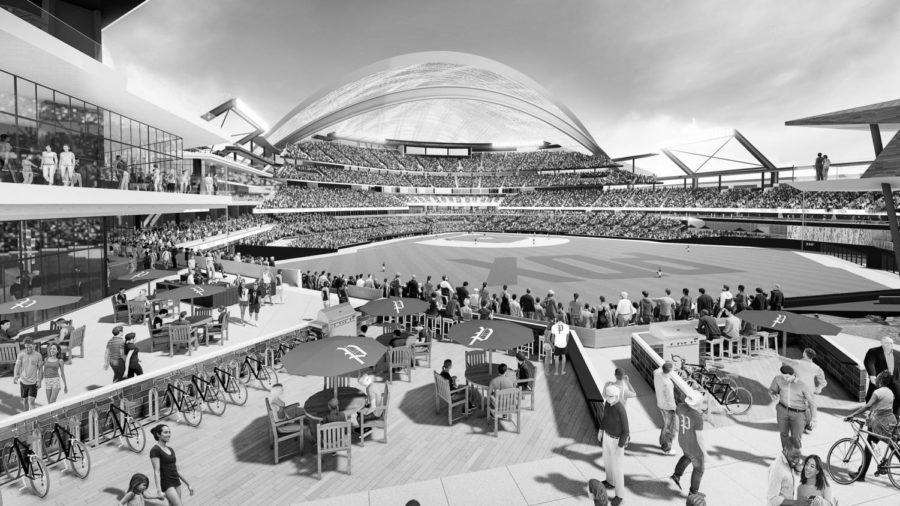 Visual renderings of the proposed Major League Baseball stadium at the Port of Portland’s Terminal 2, assuming Portland is awarded a team.

To the dismay of many Portland sports fans, it is a fact that Major League Baseball has never existed in Oregon.

Whether it should exist is under some scrutiny.

In the past two years, the Portland Diamond Project has served as the latest plea to Major League Baseball to bring a team to Portland. Nike Vice President Craig Cheek created the Diamond Project in 2017. The Project held a petition that received over 20,000 signatures in support of the organization that will be delivered to MLB Commissioner Rob Manfred by spring training. And due to an agreement with the Port of Portland in November, the Diamond Project has permission to develop on the Port’s 45-acre Terminal 2 property – their preferred site to house a stadium.

There are currently two major league teams – the Oakland Athletics and Tampa Bay Rays – who have discussed moving cities due to troubles with their stadiums.

Portland is currently the largest market in the US with only one team in four major sports leagues: NFL, NBA, MLB, and NHL (housing the MLS Timbers and the NBA Trail Blazers). However, Portland must first demonstrate a market for baseball before bringing a team to the city.

“Soccer isn’t very big, but we’re still selling out that stadium every single game,” said sophomore Sean Avery. “We’ve got a lot of baseball fans in the city, and we’re a large enough community to support an [MLB] team like that.”

Previous pushes to bring the Montreal Expos (in 2003) and the Miami Marlins to Portland (in 2006) were unsuccessful. However, the MLB-to-PDX movement has gained traction and media attention with the support of celebrity investors – including Super Bowl champion Russell Wilson and two-time MLB National League MVP Dale Murphy.

In the event that a team moves to Portland, a unique piece of state legislature from 2003 [Oregon Senate Bill 5] allows the state to use the income taxes from players and executives of the baseball team to be sent into a separate fund, instead of going to Oregon’s general fund. This fund would be filled until the amount reaches $150 million and would help to repay bonds that would fund a Portland ballpark.

“We think the ballpark is going to cost about a billion dollars, and that’s all going to be privately funded. There’s no taxpayer money going at all towards the ballpark itself,” claimed Beyrle.

“Some public participation… will be required for this effort to be successful,” said Steve Kanter, the former dean of Lewis and Clark College’s School of Law, in an interview on John Canzano’s “The Bald-Faced Truth” podcast. Kanter helped create Oregon Senate Bill 5 in 2003.

The Diamond Project is currently in talks with the city about funding the infrastructure surrounding the site.

“For transportation or for traffic issues, to make those things better – that could come from taxpayer money. That’s what we’re working on with [Mayor Ted Wheeler] right now,” said Beyrle.

Some experts believe that the organization will inevitably have to turn to taxpayers.

“It is very common for there to be claims that [a stadium] is going to be privately financed, only for it to later turn out to be publicly subsidized,” said Professor David Swindell of Arizona State University, who specializes in the public finance of sports facilities. “No one’s going to write a check for a billion dollars. They’re gonna sell debt and debt finance, and they’re going to pay that back based on the revenues generated from the [stadium].”

Stephen Stolzberg, a resident of Northwest Portland, lives a half mile from Terminal 2.

“I’m dubious about this ‘no cost to taxpayers’ and I really am not wild about the idea that we, as the taxpayers, are going to be paying for lots of improvement in the area around,” said Stolzberg. “I’m not in favor of my taxes going up to pay for a parking lot or even a bus stop to the stadium.”

The possibility of the stadium and surrounding development being funded by the public was met with disagreement.

Beyrle insisted that the PDP will not have to resort to taxpayers for the stadium.

Swindell noted, however, that many pro level players do not actually have a residence in the jurisdiction where their playing facility is. So, if some of the players do not live in Oregon, they would not pay the full income tax that is paid by an Oregon resident.

He also spoke about the appropriateness of the government being a middleman for the transaction- that is, since a government bond would pay for the stadium before being repaid by the players.

“There’s certainly a philosophical question in regards to the appropriateness of this,” said Swindell.

However, “you need to sweeten the pie to attract the team and the business to the community.”

The Diamond Project feels that this law is beneficial to the community and will prevent the need for the city to spend taxpayer dollars on a ballpark.

“Fans, businesses, tourists, and others will come to Portland and spend money, which will boost the economy,” said Beyrle, “and help fund schools, roads, and more for many years to come.”