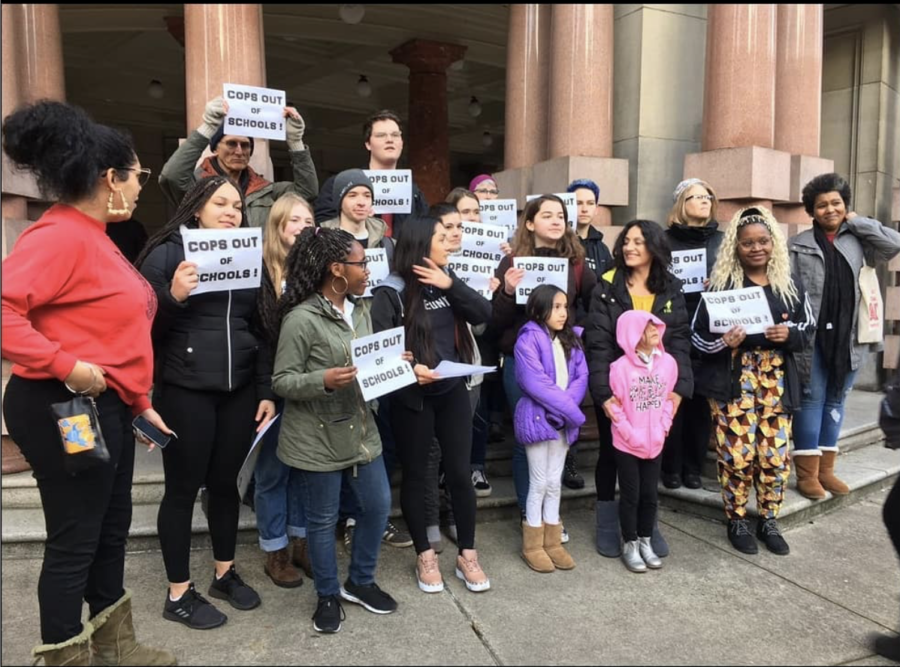 NoSROsPDX is advocating to get rid of Student Resource Officers from schools.

Many students and their families walked into a Portland Public School board of directors meeting on Dec. 4 determined and optimistic, but left disappointed, frustrated and in tears. The flash-point was regarding the partnership between PPS and the Portland Police Bureau’s (PPB) School Resource Officer (SRO) program.

SROs are police officers that are stationed within PPS schools. SROs, who are official PPB officers, protect students using a law enforcement approach instead of imposing detentions and suspensions, like campus security.

SROs differentiate from regular police officers because they have received additional training in “restorative justice,” which is implemented to train SROs to interact better with students.

Many activists, including students, saw the defunding of the SRO program by the PPB as an opportunity to terminate the program all together. The SRO program has faced scrutiny from the public regarding racial profiling and an increased reporting of nonviolent crime in schools to police.

Activists working to end SROS in schools questioned why PPS felt it was necessary to fund this program when it was already cut from the PPB budget.

“Portland Police Bureau Captain Hager said herself at the board meeting that this program is something we could cut to save costs,” said Jefferson senior and No-SRO activist Sophia Lucas.

The fight against SROs in PPS isn’t a new subject. In the spring of 2017, a group of Grant students presented demands to the board, one of which was to get rid of SROs.

Issues community members have had with SROs are rooted in a lack of community involvement and voice about the program. The meetings about the change in funding this fall were no different. According to The Oregonian, “one of the sessions designed to solicit student feedback was held a 30-minute bus ride away from the nearest high school before school had let out for the day.”

“For me, the movement started because I noticed students were left out of the conversation. My peers didn’t know about it. It was alarming that this big change was going to be made that’s going to affect funding for my education, for my sister’s education, my friends’ education and I wasn’t aware of it,” said Lucas.

Along with the lack of community involvement, students and families question where PPS is finding $6 million over five years to fund this program.

“Most schools in PPS still don’t have water and 29 of PPS schools are guaranteed to collapse with the earthquake,” said activist Lucas.

According to KGW8 “The district will post signs on 29 schools in unreinforced masonry buildings, which are considered one of the most dangerous buildings during a major earthquake.”

“They didn’t have any data for arrests in schools when there weren’t SROs in Portland,” said Mizushima.

In addition, the students alleged that the board did not have enough information about what SROs do.

“They’re out of touch with the schools. They have a one or two sentence definition of what SROs do and they think that SROs are doing that without any knowledge that they are,” said Quinn.

If the PPS funds the program, the board’s calls for data collection and annual reporting on SROs to track the calls SROs respond to and who they tend to take in for interviews.

A nationwide ACLU report published in last April said that “children as young as five are charged with ‘crimes’ for everyday misbehavior… In the 2013-14 school year, schools reported over 223,000 referrals to law enforcement.”

According to The Portland Tribune, Leland Baxter-Neal, a staff attorney for ACLU, explained that studies did not support that officers in schools provided more safety. He stated that “We respectfully request that you postpone this vote and listen to these students.”

A 2011 study published in the Justice Quarterly stated that “as schools increase their use of police, they report a higher percentage of their non-serious violent crimes to law enforcement.”

“Having an SRO at school significantly increased the rate of arrests for [disorderly conduct incidences} by over 100 percent,” said a 2009 study published in the Journal of Criminal Justice.

“In the district, the data shows a black student is 4.5 more likely to be suspended than a white student. PPS likes to promote that discipline rates have gone down, and they have, but racial disparities have remained and they are higher than the state average,” said Quinn.

“Increased police officers in schools just leads to higher levels of trauma for black, brown and indigenous students. Because of that I don’t think they should have an increased presence, I think campus security officers do a good enough job,” said Lincoln senior and co-president of Black Student Union, Gabby Cosey.

The PPB just enacted “community service officers” in the general public. These officers are non-sworn, which means that they won’t carry a gun. This position was created to take the burden of low-level crimes, such as traffic accidents and property crime, from sworn-in officers. Students tried to push for community service officers in schools instead of SROs, but were shut down by the PPB Chief Hager according to Lucas.

Despite this, Lucas mentioned that “There’s a lot of unease at the sight of police. Talking from the Latina community, there’s sort of this don’t speak up mentality, don’t cause trouble because it often feels like we don’t have a platform to do that.”

“Ideally, no SROs. Nobody with guns on campus. But I don’t necessarily think that that’s the most reasonable thing to ask for,” said Cosey.

“I can understand how easy it would be to think they were just trying to make things safe, but I don’t think they understand the trauma that that causes for black and brown students,” said Cosey.

44.2 percent of high school students in 2017 in PPS were students of color.

At Jefferson, No-SRO activists spent two days going to every individual classroom to spread awareness for their cause.

Cosey believes that Lincoln could be doing more support activists and their movement.

“As a majority white school,” Cosey said, “it’s our privilege and therefore our duty to be supporting students who are coming forward and speaking out and encouraging, uplifting and empowering them. We have a lot of power and say to do that and the fact that we’re not is upsetting.”

A motion was pushed by students at the Dec. 4 board meeting to delay the vote a few months in order to appropriately include public voices. A petition was presented at the board meeting to support this — it received more than 700 signatures in only a few days. Nick Paesler is the student representative of the board. He protested against continuing the vote and pleaded with the board to listen to the students. Paesler votes with the other members, but his vote is only symbolic and doesn’t count.

The motion to delay the vote only received two yes votes, from board members Scott Bailey and Amy Kohnstamm. The vote would carry on.

The only member to vote no was also the board’s only member of color, Vice Chair Julie Esparza Brown.

According to the Portland Tribune, Brown stated that “For many of us, there’s fear when we see uniforms and police. I just want to acknowledge that.”

The Oregonian also explained how Brown had experience being “unfairly targeted as a person of color and that she was worried about how this decision would adversely affect children of color in schools.”

After Brown voted no, the board was unable to pass the motion. The board called for a revote after Bailey said he would change his vote.

In the revote, Brown again voted no and Kohnstamm abstained. Bailey was the swing vote– he voted yes– and the motion was accepted.

According to an article in The Oregonian published after the Dec. 4 meeting, the board was given the deadline of Dec. 31 by the PPB to make a decision regarding funding SROs, causing the board to push this issue with a sense of urgency. However, since the PPS board voted three weeks ago, the Portland City Council has yet to approve the motion.

In the article it is stated that Brim-Edwards wants the board to suspend the original agreement until more input is received. She said the board was “presented with the proposition that if we did not approve the (inter-governmental agreement), that the City of Portland would defund the school resource officers.”

In the article, Kohnstamm mentioned that the board “didn’t feel like we had sufficient time to talk with students and talk this through.”

Brim-Edwards also mentioned that “We were hurried into something that turns out it was a false timeline. This provides us the timeline to act appropriately and engage with our students before we move ahead.” This will entail students, families and staff have time to voice their opinions and concerns on the presence of SROs in schools.