Junior Tasneem Sarkez’s art captures attention on her murals on the Lincoln walls. Sarkez doesn’t “like to define what artwork means.” 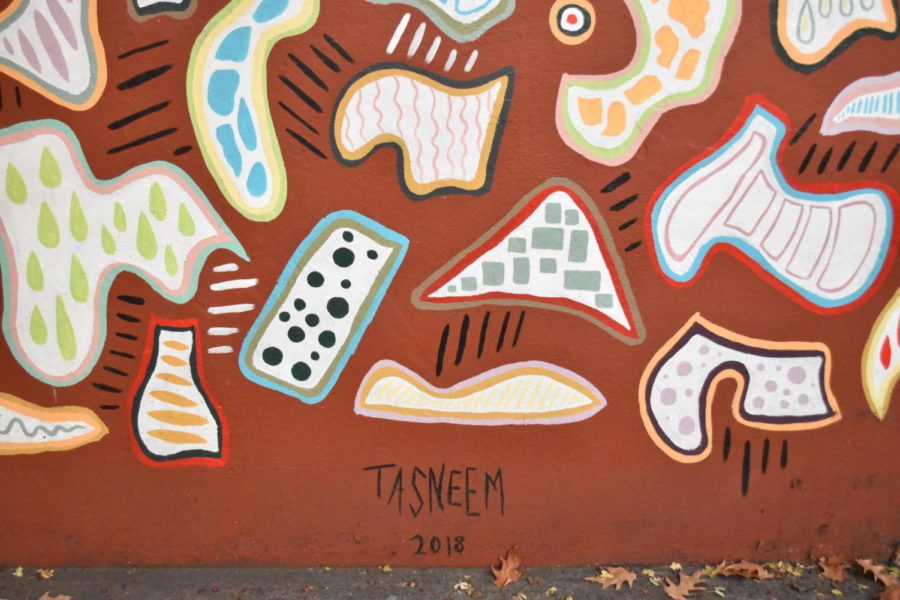 Sakez’s signature seen below her mural along 16th Ave. along the stairwell leading to the football field.

Every day, hundreds of students enter the school from the South along 16th Ave., walking by the artworks of Tasneem Sarkez.

Sarkez, 16, is the junior responsible for the abstract wall art along Lincoln’s south staircase. Painted last spring, the ‘giraffe spots’ mural has already become a familiar part of the school.

“I especially like the color scheme,” says Emma Brauser, a sophomore at Lincoln.

Sarkez painted the mural in her sophomore year as an end-of-school project for her visual arts course. Many students painted similar murals around Lincoln as part of the project. Right now, Sarkez is more concerned with what she’s currently working on than with her past work.

“The new painting is of a hijabi skater,” says Sarkez. “I wanted to paint one giant person.”

The painting, over 10 feet tall and several feet wide, will be displayed in the halls of the rebuilt Lincoln.

Her art teacher, Lilly Windle, is beyond impressed.

“Tasneem is amazing!” says Windle. “She was one of the most driven, motivated students [in the class].”

When asked about the meanings behind her paintings, Sarkez chose not to explain.

“I don’t like to define what artwork means,” she said. “It’s different for everyone, and the meaning can change
over time.”