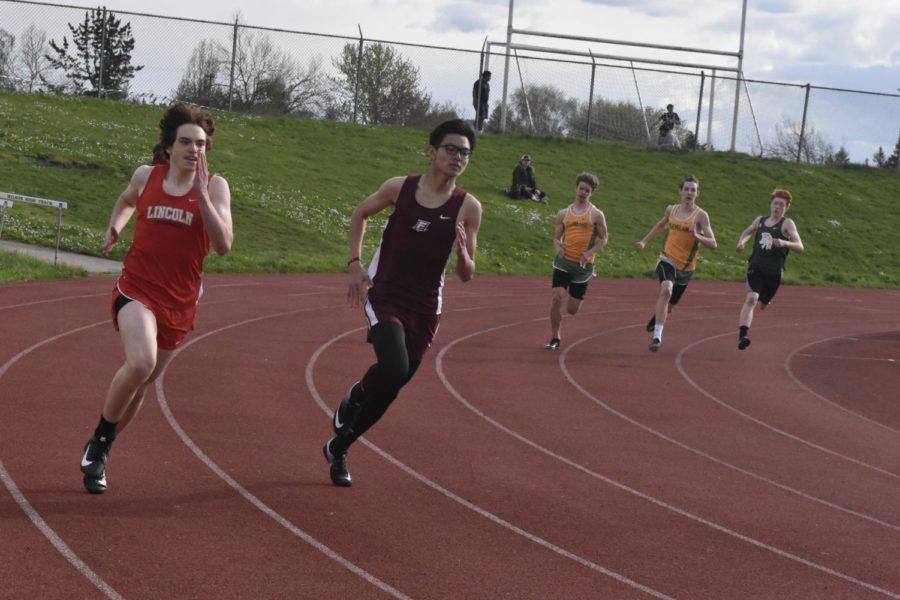 Sophomore Elias Raider running in a meet at Cleveland high school on April 18.

Runners and field athletes are laced up and competing this track season, for top positions in this years state championships. Currently Lincoln has some of the best runners in the state and athletes who are ranked nationally.

Junior distance runner Jalen Javurek, who recently sustained an ankle injury, is optimistic about  how the team will do this year. “I think we are gonna win state, we have good sprinters and good distance runners,” Javurek said.

He also expressed his appreciation for the great coaching staff at Lincoln. “Amazing coaches,” he said, “best coaches I could ask for helping me through my injury.”

In the first track meet of the season, Sawyer Christopher, a senior javelin thrower, won first by a large margin, launching his javelin 193 feet. He is ranked fourth in the country. Junior Charlotte Anderson is also ranked nationally at 13th in the country for girls javelin, and has a personal record of 141 feet.

Coach Eric Dettman said that “the reason for why they’ve done well is simple; they’ve committed to excellence.”

Dettman also believes that Lincoln’s chances in the state championship are promising. “We have high expectations for this team,” he said. “I believe, on a good day, that our girls can win a trophy.” he said. “We have one of the best female distance runners in the state, Kyla Becker.”

Becker won the girls’ 800-meter at the home meet against Jefferson and Cleveland with freshman Mia Kane following two seconds behind her. Kane set a personal record coming in at 2:21.81.

Kane, who also runs the 1500, said, “It’s really fun to be on the team, and we work really hard together.” She and Dettman are both in agreement that the track and field team will win the state title this year.

“Our staff has a wealth of knowledge and does a great job of relaying that to the kids,” says Dettman. “From a kids’ standpoint, we’re trying to build a community of commitment.”

He spoke highly of the Lincoln track community. “l love everything about coaching this group of students with this group of coaches.”