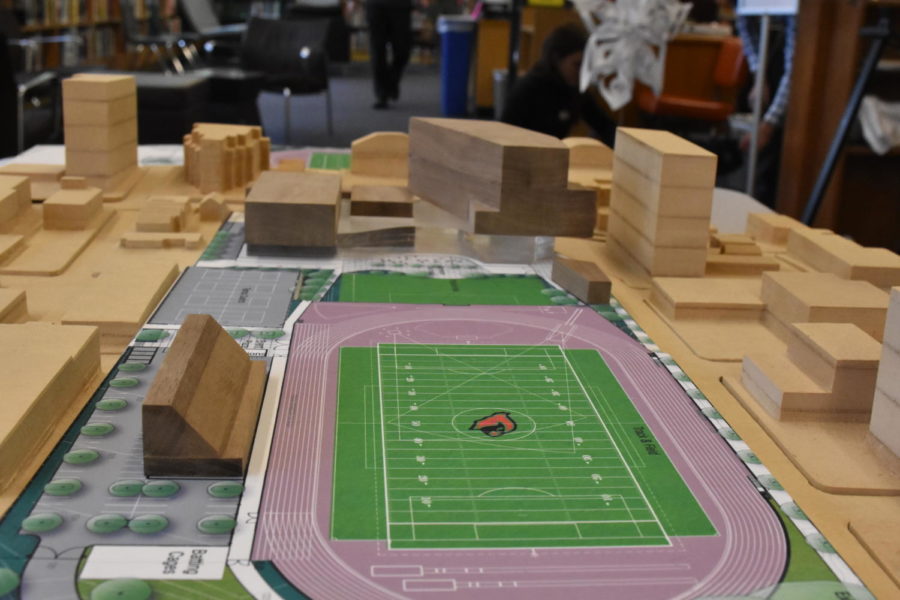 3-D model of the new school.

A group of dedicated students and staff will fly 5,000 miles to Scandinavia next month to explore how Lincoln’s rebuilt building could better serve students.

Finland has taken several innovative approaches to school construction that the group wants to bring back to Portland. Even though Lincoln’s rebuild – funded by a bond measure passed last year – remains five years from estimated completion, planning efforts are at full speed ahead.

They will visit at least four schools and hold panel discussions with Finnish architects, education policymakers, and students.

Finnish schools have consistently ranked among the top in the world by Organisation for Economic Co-operation and Development. Part of that ranking stems from the design of facilities.

For example, “Finnish schools are increasingly adopting the mindset that flexible, open learning spaces are better than walled-off classrooms,” according to Business Insider. The open environment allows classes of different subjects and grades to collaborate.

Moreno says this is why the group chose to visit Finland. “Finland has one of the best education systems in the world. Their curriculum is modern, innovative, and effective, and their school buildings are purposefully designed to facilitate the teaching of that curriculum,” he said.

The goal of the trip is “to identify best practices in curriculum and facility design and how they can apply to current and future school modernization projects in both PPS and throughout the state,” he said.

Chapman is looking forward to the trip.

“This is a once-in-a-lifetime opportunity. It is a highly customized trip,” Chapman said. “Rarely do students and educators get to travel with architects, school board members and teacher leaders to look at how you design future schools.”

She is especially looking forward to meeting Finland’s Department of Education and the country’s top school architects. “We always want to be innovative in our teaching and learning.”

Meanwhile, back in Portland, professionals are working with students and teachers to not only create a better educational experience in the new building, but to match with the city’s commitment to the environment.

Over 25 architects, engineers and project managers spent the day at Lincoln on Jan. 12 to discuss how the rebuilt Lincoln can be more friendly to students and the environment. Cardinal Times reporters also attended this meeting.

The group broke into three focus sessions, the titles of which revealed the wide-ranging and sometimes idealistic goals of the session.

During the “energy, climate, resiliency” session, strategies for net-zero energy in the building were discussed, as well as planning for natural disasters. For example, Lincoln will be built as a gathering point for the surrounding neighborhoods after a disaster, and will have a massive water tank for this reason.

The school will also have an eco-roof, solar panels and much more natural lighting in classrooms. A new idea proposed was covering the bleachers with solar panels.

Based on discussions observed by Cardinal Times reporters, planners are considering beyond these large aspects, even down to the smallest detail, such as USB ports to charge devices and the ways grease in the kitchens can be recycled.

In the “site, land and water” session, analysts from sustainable architecture firms led discussions on rainwater collection, vegetation, soil and other ways the school’s negative environmental impact can be reduced. Transportation was also considered: bike storage will likely improve, while parking for teachers is not necessarily a given.

The PPS planning team will conduct a survey of LHS students and staff later this year to get a better idea of how Cardinals commute to school.

Throughout the meeting, the group discussed how the sustainability efforts can be integrated into the curriculum. For example, science classrooms in the new building could have interactive dashboards showing real-time information on the building’s energy consumption. Gardening and culinary arts classes can take advantage of the gardens on the rebuilt campus.

Even during construction, planners believe students can benefit. History and anthropology classes will be interested in the archeological finds that may appear when the field is dug up. Art students can beautify the new property with murals or art pieces.

Chapman added that she hopes some of the construction managers working on the project might be able to teach a class on construction project management, a high-wage job that is in high demand, especially in Portland.

Some of the ideas proposed at the Jan. 12 meeting were unrealistic – such as heated seats to reduce building temperature, or using the current basement to store rainwater. But Chapman, who attended the meeting, said architects are researching some of the ideas further.

Many students attended the sustainability meeting, especially from Tim Swinehart’s Environmental Justice classes. Their ideas were strongly considered by the adults at the meeting. After all, students know best what future students will want in their learning environment.

The planning process will continue through June, Chapman said. She said that PPS hopes to have a construction firm chosen by June, as well.

After this, the firm will work to pare down the plans to fit the budget. The city permitting process will then take several months. Construction is slated to begin in early 2020.

Until June, Chapman hopes students can continue to be involved in the design process.

They can attend Design Advisory Group meetings, and she hopes architects will come in to meet with students during a FLEX time or leadership classes. An online survey might be developed.

Further, despite being across the pond in Finland, the traveling delegation still wants other students to be involved.

“We will be running social media accounts during the trip so [PPS] students and teachers can ask questions or give ideas while we are in Finland,” Kendall Accetta said.

She thinks that student input, whether it comes during the trip or in meetings with planners back in Portland, is essential.

“This trip is one of the main ways the architects designing the school will gain insight about how the new building will be constructed, and to be able to offer input on these new ideas is an incredible opportunity,” she said. “I want to make sure that the new building is not simply a product of the architects and adults, but also a product of the students that will actually be learning in it on a day-to-day basis.”

New school to be seven floors, not nine:

Original plans for the new Lincoln called for a nine-story classroom building. This has now been revised to seven floors, but principal Peyton Chapman says this will not negatively affect future students and staff.

The main factors in the decision were cost and the amount of space that PPS guidelines allow.

“When we actually mapped it out, nine [floors] gave us more square footage than we could have or afford,” Chapman said.

When considering archeological dig sites, most of us think of Egypt or Greece. But when the football field is dug up to build the new school, construction workers will be digging into so-called “undocumented fill,” meaning they do not know for sure what they will uncover.

Architects raised the prospects of archaeological finds on Lincoln’s campus at a Jan. 12 meeting, pointing out that Lincoln is built over the former Tanner Creek, meaning it could have been a gathering place for Native Americans and, later, white settlers.

The Cardinal Times reached out to an expert to find out the possibilities.

Dr. Doug Wilson is director of the Northwest Cultural Resources Institute and an Associate Professor of archeology at Portland State University. He said there are archeological remains in the city that have been found in the past.

“Most of them are from the 19th century, but there’s certainly the potential for pre-contact Indians,” Wilson said. In terms of 19th century items, he said there is a chance to find pottery, glassware, and items from the tanning process.

“From American Indian sites, much of what we find are pieces of stone that are debris from manufacturing stone tools such as arrowheads.”

Wilson said there is a possibility that a creek running through a low-lying area certainly may have attracted people to the site. “[The Lincoln site] was certainly an area the early pioneers used.”

Anything found would give insight into Portland’s history. “Any site would be of interest in the Portland area because we have not recorded a lot of them,” Wilson said.

Architects mentioned at the Jan. 12 meeting that they hope any archeological discoveries could be integrated into the Lincoln curriculum.