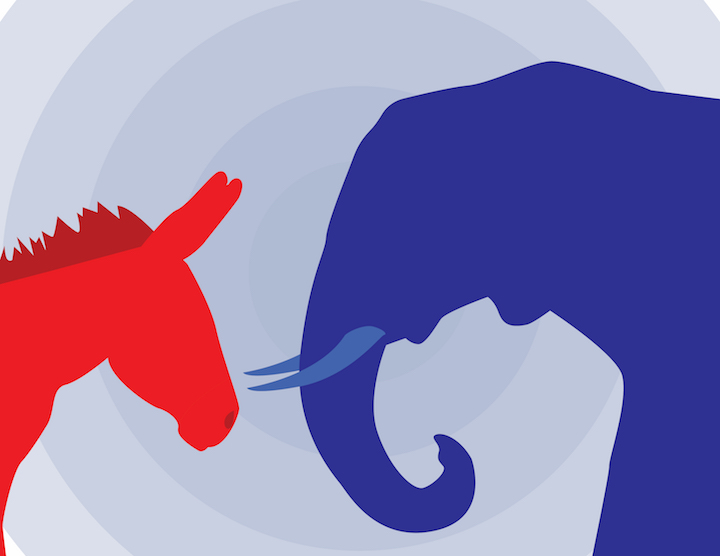 Liberals and conservatives will always differ on many beliefs as their core values define their parties. Each group stereotypes the other, expecting their political opponents to always nurse established views. However, some members of each party find themselves at odds with those who share their platform.

Democrats have generally favored more gun control than Republicans. However, the reality is that some left-leaning individuals enjoy their Second Amendment rights.

According to Pew Research, one in five Democrats own guns, and 11 percent of Democrat gun owners belong to the National Rifle Association.

Likewise, pro-choice Republicans, who favor lifting restrictions on abortion, are also a minority in their party. Only 34 percent of Republicans are pro-choice, according to Pew Research.

Immigration has also become a contentious debate among the two parties. A 2017 YouGov poll revealed that 95 percent of Trump supporters agree with the US president’s travel ban, aimed at Muslim-majority countries. On the other hand, only 12 percent of Democrat Hillary Clinton’s supporters agreed with the ban.

One of these political outliers is senior Matthew Brayton, who, although a Democrat, opposes increased gun control.

“Some amount of gun control is necessary. Taking away all guns isn’t going to solve all problems,” Brayton says.

“There are benefits to guns besides killing people,” he adds.

A conservative senior, who requested anonymity, also harbors values contradictory to those of his group.

When asked why he chose to be anonymous, he replies that at Lincoln, “students and teachers tend to silence the views of conservative or somewhat conservative students.”

He stresses that he is a conservative and not a Republican.

“There is a big difference between conservatives and Republicans. They are two different things,” the senior says.

He believes the federal government should exert less control over citizens’ lives. He feels that anti-choice values contradict key parts of conservatism, which advocates for less government control.

“[Being pro-life] is an ironically conservative viewpoint. [Abortion should be] the choice of a mother and her family,” the senior says.

When the Cardinal Times inquired about his views on religion in government, the senior replies that it is “a tricky” question.

“A lot of our law today stems from religion, but [religious] texts are harder to interpret in the modern era,” he explains.

Senior Alex Sathler, who considers himself liberal, shares some common ground with those of the opposite party.

“I value family, I value honesty, I value freedom of speech,” Sathler says.

The veteran Boy Scout drew many of his beliefs from his Scout Oath and the 12 Points for Scouting.

According to the Boy Scouts of America, the 12 points to which a Boy Scout should adhere are to be “trustworthy, loyal, helpful, friendly, courteous, kind, obedient, cheerful, thrifty, brave, clean, and reverent.”

“Caring towards other people [is important]. Family is a good basis for that. It is like an institution which engenders caring for people,” he adds. “It’s also important to carry that caring from the family into the community.”

“I think freedom of speech is very important. We are losing the ability to accept that other people’s point of view is their point of view,” the Boy Scout believes.

He explains that individuals’ mentality is increasingly becoming “us vs them; liberals or conservatives.”

Sathler asserts that “liberalism and conservatism need each other to exist.”

“I think both progressivism and conservatism are needed for progress, and both are needed in the country. We just need to be able to accept that other people’s political views are generally logical and deserve to be considered and listened to,” he stresses.

As a conservative- but not a Republican- junior Joe Schlechter “believe[s] very much in social justice matters.” He disagrees with conservatives who are anti-choice and anti-gay marriage.

“I am conservative under the definition of conservative being less government,” he states, “I believe abortion is a woman’s choice.”

Similarly, senior Preston Kill is also pro-choice. The conservative libertarian believes that “a woman should have the right to choose” even though he deems abortions “not ethical.”

According to the Libertarian Party site, Libertarians seek “a world in which all individuals are sovereign over their own lives and no one is forced to sacrifice his or her values for the benefit of others.”

In spite of his pro-choice views, he “tend[s] to find more similarities in recent elections with Republicans.”

Another senior, who also requested anonymity, offers beliefs which might normally be construed as liberal. As a vegan, his lifestyle may differ from other conservatives.

A 2011 Hunch study which targeted its 700,000 members, found that only three percent of its Republican members were vegetarians versus the 10 percent of vegetarian Democrats.

“I strongly believe in the equality of animals and humans,” the senior says.

He states that the “dairy and cattle industry is the number one contributor to climate change.” He also notes that people are unwilling to “address the reality of the horrors of the cattle industry,” because “humans are principally selfish.”

The conservative vegan also supports the Affordable Care Act, but adds that “it could use some improvements.”

Worried over “an aggressive response [this student] usually received from the liberal side,” he opted to stay anonymous, valuing his “friendships more than a political argument.”

“Most conservatives share [this] sentiment at Lincoln, that any conservative viewpoint is quickly shot down and despised,” he said.