Alum finds success on and off pitch 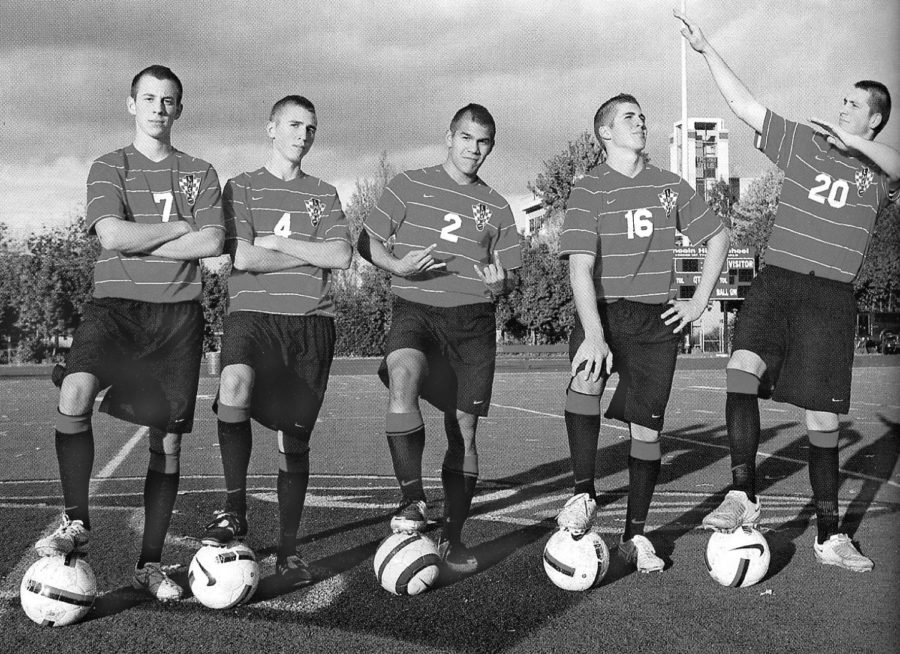 Matt Sheldon (far left, wearing number 7) graduated from Lincoln in 2011. He is now a professional soccer player and a YouTube personality.

There is only one Lincoln alum who not only plays professional soccer, but has a YouTube channel with over 100,000 subscribers and his own company.

Matthew Sheldon graduated from Lincoln in 2011, and most recently played for St. Louis FC of the USL, the American second division league. He also runs a company and YouTube channel that both focus on developing young soccer players, and giving insight into the life of a professional athlete.

However, before he reached this point, he attended Lincoln for all four years of high school.

Sheldon enjoyed his time in high school which culminated in a stellar senior season where he scored 14 goals and was named to the first-team all PIL. He remembers Lincoln soccer fondly, saying it was the funnest soccer season he has ever had.

The next step in his life came when he commited to play Division I soccer at UC Davis. According to Sheldon, a lot went into this decision. He ended up being recruited by three different schools including Oregon State University. He ultimately decided on UC Davis because he felt it was the best fit.

He says he made the right choice, and was successful on and off the field there. On the field, he gained an honorable mention his junior year and a place on the all-league second-team his senior year in the Big-West Conference. He graduated in 2015.

While he excelled in college, his road there was not easy. For much of high school he was placed on the “B” team of the Westside Metros, a local soccer club. With hours of time in the gym and extra practice, he was able to make the “A” team his senior year and gain three offers from Division I colleges.

Sheldon recalls his father being essential in encouraging him to keep pursuing his dreams. “My father was extremely encouraging in helping pursue my dream of soccer,” he said.

His father agrees. “He didn’t get a lot of breaks playing soccer. Through high school, he was placed on the ‘B’ team and I always had to explain that this wasn’t all bad, you’ll get tons of playing time. Focus on what you can influence and ignore the rest. I was always there to go and help him practice,” says Chuck Sheldon, Matt’s father.

His father adds that the reason for Sheldon’s continuing success has been his son’s “obsessive personality.” He also says that the younger Sheldon commits 100 percent to things that are important to him.

According to his father, these same characteristics helped Sheldon to make the jump from college soccer to the pros. He began playing with the U23 San Jose Earthquake team and the coach’s belief in him encouraged him to fully pursue becoming a pro.

After his time with San Jose, Sheldon played for many teams, including time with a team in Germany. For the most recent 2017 season, he played for St. Louis FC. While the season began well with him starting many games, he has suffered several injuries which he is still working to overcome.

However, Sheldon remains hopeful, saying that “[he’ll] hopefully be able to play and be 100 percent for the 2018 season.”

Sheldon declined to reveal his plans for the upcoming season.

Another key feature of Sheldon’s life is his YouTube channel, Become Elite. As of Jan. 3, 2018, he had 139,000 subscribers. The channel mainly consists of soccer training videos and videos giving people insight into the life of a professional athlete.

For Sheldon, making videos is more of a recreational activity. It has always been one of his passions. From a young age he made home movies with his neighbor.

A big goal for Sheldon is “to one day cross 1,000,000 subscribers.” While this goal is important, he adds that the ultimate purpose of his YouTube channel is “to continue to inform, teach, and inspire more and more people every single day and give back to the soccer community.”

In addition to his YouTube channel, he is the founder of Become Elite, a company that aims to provide resources for aspiring soccer players. Sheldon sees himself growing this company as a full-time job once he retires from professional soccer.

In this job, he works to provide training plans and inspire other soccer players to follow their dreams.

Sheldon offered advice to Lincoln students: “Figure out what you are truly passionate about and pursue that field with unrelenting dedication and hard work. If you focus on what you love to do and put in more work than everyone else, you will be successful no matter the path you choose to take.”