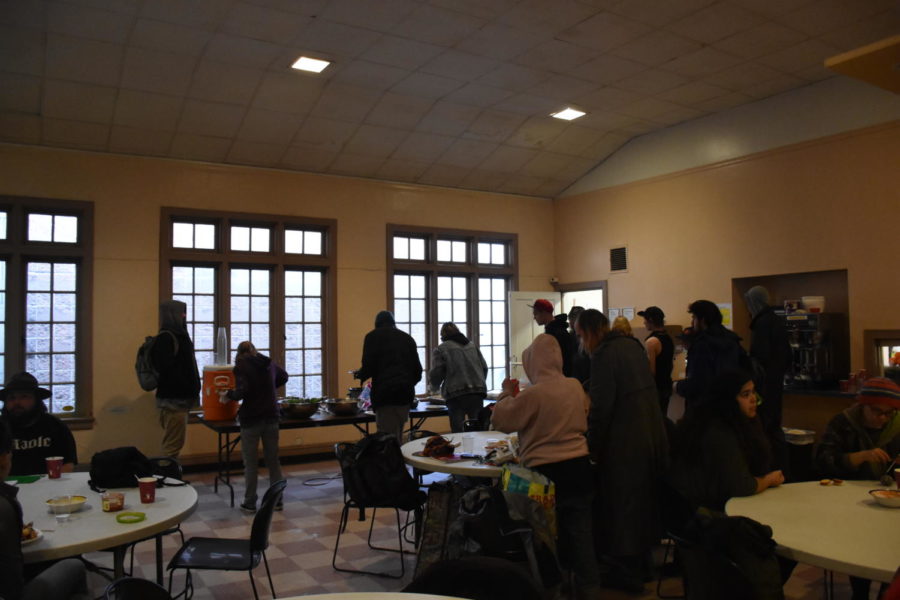 Guests serve themselves a meal at Clay Street Table on April 12, 2017. A record number of students in Portland Public Schools are homeless, according to recent state data.

With Portland’s growing lack of affordable housing and absence of family wage jobs, more than 1,500 students within Portland Public Schools are homeless, according to The Portland Tribune. Gentrification is also putting minorities and lower-class residents at risk of neighborhood eviction because it is no longer affordable.

With around three percent of PPS students affected, the Cardinal Times decided to explore what the effects of this rising problem are.

According to the Oregon Department of Education, in the 2016-2017 school year, Oregon’s student homelessness rate reached an all time high, with 22,541 students who lacked a consistent nighttime residence. PPS is currently the second highest contributor to these growing rates.

A PPSs student, who has experienced homelessness first hand, and who requested to remain anonymous for privacy explains how homelessness at one point has affected her.

“A few of the main problems are of course food and shelter, but the school can help a lot with that along with homeless shelters,” the student said. She states, “It can make you feel very isolated and different from everybody else because you never want anyone to know. It’s the feeling of loneliness and pity that society pairs with homelessness that destroys people.”

Not only can homelessness affect a student’s own emotional health, but it can also affect their academic success.

“It can really affect these students grades and friendships because of how hard it can be to be on your own sometimes,” the student said.

It can be hard for a homeless student or a family with low income to prioritize school over their needs at home.

“There were times when I would visit the homes of the truant students and find the families poor and they had little resources for basic needs. For instance, houses were really messy, they had no running water, and didn’t even have proper bathrooms,” Brooks said.

Brooks would give these families resources and opportunities to tutoring, food, clothes and searched for grants for schooling and jobs. “A lot of times, I would also see some parents and students abusing drugs and alcohol. In order to help them, we offered rehabilitation services.”

At Lincoln, there are several clubs that provide different resources to aid in the homeless crisis – the Kids First Project is one of them.

“We work directly with the homeless,” said senior Kerry Horton, president of Kids First Project, which began last year. “In addition, to helping out at the shelters, we have also led personalized tutor sessions for homeless kids, we have led educational activities to the kids in shelters, and we have led lacrosse workshops to girls who are in low-income areas.”

Another way students are helping with homelessness is through Cards Cook.

“We found a way that Lincoln students could help people by cooking for underprovided youth on Wednesdays from 4-6,” co-president Ben Brandenburger said.

Several Lincoln students such as junior Julia Ziegler are making a change by participating.

“Most of our time is spent in the kitchen where we prepare dinner for homeless youth and young adults in the community,” Ziegler said.

Ziegler’s father inspired her to take up this work. He worked for the non-profit organization Outside In, located across the highway from Lincoln, which “helps homeless youth and other marginalized people move towards improved health and self-sufficiency,” according to their website.

“When we have lots of volunteers, many of us hangout in the common/dining area with [the shelter guests] and have conversations with them,” added Ziegler.