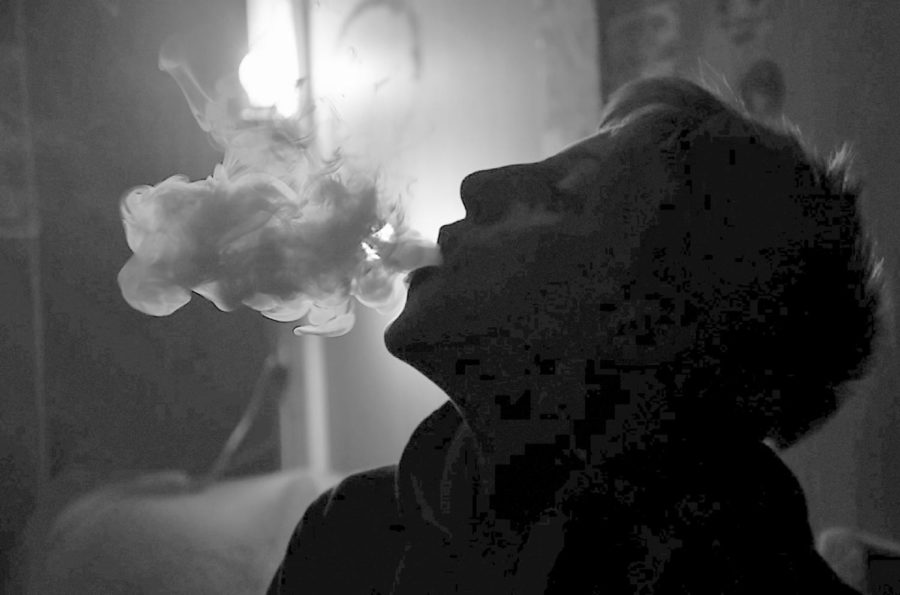 Many students at Lincoln – despite knowing the health consequences – try smoking, vaping or Juuling anyway. Pictured is an adult and not a Lincoln student.

Smoking ruins the lungs. It shrivels the face. It yellows the teeth. Yet some students still smoke at Lincoln.

A Lincoln junior who smokes finds the potential risks to be “overblown.” He believes that smoking is “really bad to the body,” in the long term, but in the short term presents no dangers.

“When you stop [smoking] you just feel miserable. You have to continue,” he adds.

Health teacher Dr. Timothy Goldhammer worries about the addiction to which students are vulnerable.

“I think the main problems with cigarettes is that [adolescents] do not know the dangers associated with addiction that comes from nicotine,” Goldhammer says.

“Many teens might think they [smoke] once or twice, or for a week or a month. We know from the research that smoking has an impact on the body the first time you begin smoking,” he adds.

“Kids don’t understand how powerful nicotine can be.”

Goldhammer’s warnings resonate with a senior who used to smoke.

“I was never addicted, but I can understand how kids become [addicted],” the senior says, “I quit because I would wake up the next day coughing so much. Then I began to have these headaches.”

He likens smoking and vaping to jaywalking. Once someone starts either, they will eventually face the consequences.

Many believe that the dangers of smoking were unknown until the late 20th century. However, the first discovery of its health risks began in the 1930’s. Researchers in Cologne, Germany drew a positive correlation between smoking and cancer. Unfortunately, their research would bear little effect as cigarette consumption peaked in the 1960’s. By 1965, 42.4 percent of Americans smoked, according to the Center for Disease Control (CDC). Congress eventually passed the Public Health Cigarette Smoking Act in 1971, which banned smoking advertisements on both radio and television. Work places began to become smoke-free, and taxes were eventually imposed on tobacco companies, which spiked cigarette prices. Professor of Medicine at the Mayo Clinic, Dr. Richard Hurt, told the New York Times that these factors served to eventually discourage smoking amongst young consumers, who were less able to afford cigarettes. By 2015, only 17.8 percent of Americans smoked.

Unfortunately, most smokers begin before age 18. The Surgeon General’s Office reports that nine out of 10 smokers started before they become adults. For Lincoln students, this could signify a continuation if they begin.

As a result of the dangers of traditional cigarettes, computer pioneer Phil Ray and physician Norman Jacobson introduced the first commercialized electronic cigarette, known as “E-Cigarettes.” By 2003, Chinese pharmacist Hon Lik delivered the first successfully-commercialized E-cigarette.  After his father died of lung cancer, Lik sought to find a way for people to smoke without all the negative health effects.

If you’ve been to the gender neutral bathroom this year, or looked at the school’s public Snapchat story, you may have seen students at Lincoln using a Juul, or “Juuling.”

A Juul is a new, easy to use e-cigarette or vape pen targeted towards adult smokers who would like an alternative to regular cigarettes. When asked why students Juul, answers varied. Some believe that being able to juul in the bathrooms prevents them from feeling the need to skip class. One junior said that “if I can just go to the bathroom to relieve some stress, I probably won’t skip class to go smoke with my friends.” According to another junior, Juuling is a “fun thing to do with [their] friends when class gets boring.”

The e-cigarette epidemic is not just at Lincoln; it has taken over the nation. In a survey conducted in 2015, 1 in 6 high school students reported to using a vape pen in the past month, and nearly 3 out of 5 high school smokers also use e-cigarettes. The National Youth Tobacco Survey from 2011 to 2015 shows a drastic increase of e-cigarette usage among Middle School and High School students. The situation has gotten so extreme that Juul Labs issued a statement to FOX 25 Boston: “Minors should not use any nicotine product, including ours. JUUL was created for adult smokers of legal age only and we strive to keep our product out of the hands of minors. Recent science raises concerns about the adverse effects of nicotine on adolescent neurodevelopment.”

Most E-cigarettes contain the addictive chemical, nicotine. Nicotine, which is found in traditional cigarettes as well, can damage the arteries and heart. Some E-cigarette brands also contain formaldehyde, which may cause cancer. The National Cancer Institute (NCI) states that formaldehyde is used for building material, house products and germicide.

The health risks surrounding Juuling and e-cigarettes are major. According to Surgeon General, e-cigarettes and vape pens have dangers – in addition to large quantities of nicotine. Vape pens may contain harmful ingredients such as volatile organic compounds, heavy metals like nickel and lead, and flavorings like diacetyl, which has been directly linked to lung disease. In fact, Dr. Lester Hartman of Boston Children’s Hospital told FOX 25 Boston that smoking one Juul is equal to an entire pack of cigarettes.

Youth and young adults are at risk for long-term, long-lasting effects of exposing their brains to nicotine including nicotine addiction, mood disorders, and permanent lowering of impulse control, according to the National Institutes of Health. Nicotine also alters the formation of synapses, which can harm the parts of the brain that control attention and learning.