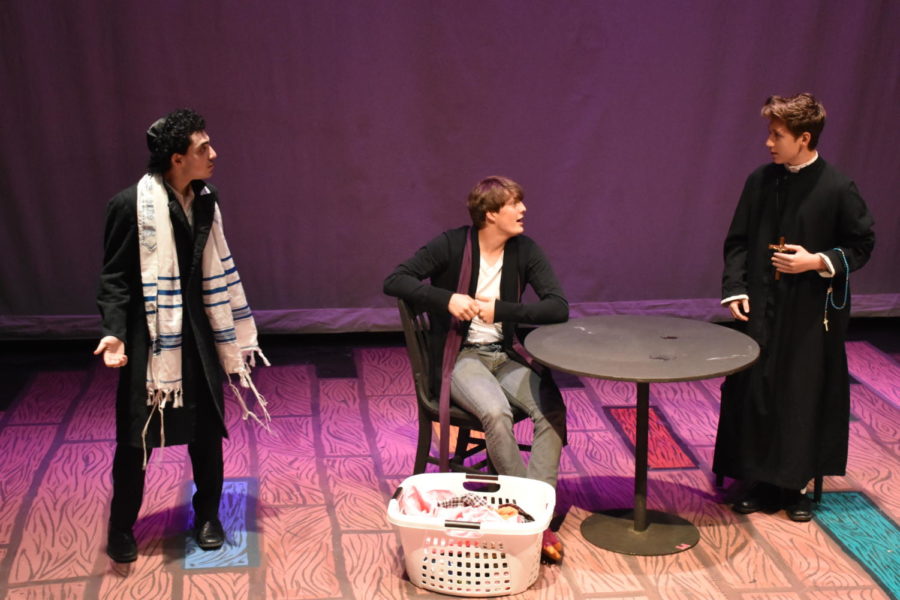 Lincoln High School’s upcoming rendition of “Love’s Labour’s Lost” is not only a story about four college friends testing their boundaries and growing as people, but a comedy pointing out the true youthful struggles of balancing emotions and logic.

The Cardinal Times talked with four crucial contributors of the upcoming production.

What is the name of your upcoming play and what is it about?

“‘Love’s Labour’s Lost’ is a Shakespeare play, but we are [having it set] in the 1950’s. It’s about a group of guys who go off to college and sign contracts with each other saying, ‘we are not going to drink, party, and we will say no to all women.’ They are going to focus on becoming better people until they meet a bunch of beautiful girls and have troubles getting out of their contract. The director of the show, Stephanie Mulligan, who’s a professional [director] in the community said, ‘Well, let’s set this in college.’ In the 50’s when there was a lot of conservatism but things were changing after the war and it’s perfect because it’s the fall and a bunch of guys are going to college.”

What is your favorite part of the play?

“This is one of Shakespeare’s earlier works where it plays with structure a little more and fits more of how television, movies, and plays are being written now – a little more messy, not with a tidy pretty ending. It’s not so typical, ‘everything works out in a Disney world.’ I like the fact that somehow Shakespeare knew [that five] hundred years later that this was gonna be a style that was really hot.”

What’s the most challenging part of the play?

“The text. We haven’t changed any of the words. In Shakespeare’s time, you would go to listen to a play, they would call it listening to a play instead of seeing and it was all about the language. There was so much going on with the language. Now, so much is with the visuals. Shakespeare used his text to make people know ‘this person’s high class,’ ‘this person is poor,’ and so on. So we are trying to find a happy medium between the visuals we can use to help people who don’t have a well-trained ear.”

Tell me about the director.

“Stephanie Mulligan worked with us once before and directed a show called ‘Murder Is My Business’. She wanted to come back and we wanted her to come back. Now we’ve gotten a show that’s accessible for everyone. We’ve got everyone from freshmen to seniors in the show.

Tell me a few reasons everyone should go see this play.

“First, I think everyday people encounter Shakespeare, whether they realize it or not. He has entire phrases that he coined. [Also], people think that they can’t relate [to [the play because it’s Shakespeare]. But if you can’t relate to a bunch of people going off to college and testing their boundaries and questioning the decisions on who they thought they were going to be, I don’t know what we can do for you. So I think they will be pleasantly surprised. By the end they will think, ‘that isn’t what I expected but I really enjoyed it.’”

“She’s one of the ladies in waiting for the princess of France.”

What is your favorite part about the play?

“I love the people who are in it. The scene work is really fun when you’re close with the people in the play.”

How are preparations going?

“We are rehearsing five days a week. We have to still go over and add more intricate blocking. When show time gets closer it’s going to start amping up. Tech week we are here from the end of school till 8 or 10.”

Tell me a few reasons why people should go see the play.

“Well, it’s funny. Everyone in it is having a really good time and people who see it will be able to tell how much fun we are having and how hard we worked on it. It’s also not very well-known since it’s one of Shakespeare’s earlier plays.”

Who is your favorite character? Is it the character you play?

“Yes, my favorite character has to be the one I play, Berowne. He’s the King’s best friend, and he’s such a confident and sassy character, I can’t help but admire him. He’s got an immeasurable wit and intelligence, although he’s also a hopeless romantic.”

What is your favorite part about being in the play?

“The cast. Without them, it wouldn’t be nearly as enjoyable. They’re all such wonderful people and they all work hard to make the play good.”

What is the most challenging part of the play?

“The line load. My character, along with a lot of others, have a ton of lines to memorize, and not only that but it’s all in a completely different grammar than what we’re used to. It’s a struggle, but I think we can all get through it.”

What is the toughest part of rehearsals?

“The amount of time we put into it. We all love what we’re doing, but sometimes it can be difficult to work for three hours after school and get all our homework done in the same day. It takes a real expert to do a play and school at the same time.”

“I play the role of Costard. He’s this sort-of country bumpkin who is arrested and is a servant to this noble-man. It’s a really comedic role and my character is almost constantly cracking a joke or messing up the jobs he’s giving. It’s honestly a perfect role for me, I relate to Costard on a deeply personal level.”

Tell me a bit about the play and what makes it unique to the other previous Lincoln Productions?

“First off, this is the first Lincoln show that’s a work of Shakespeare since 2010, when we did “Macbeth”. Secondly, the show is actually guest-directed by Stephanie Mulligan, a touring director at Triangle Productions. She’s been doing a great job and it’s a ton of fun to work with her. Thirdly, every show at Lincoln is different and brings a new cast and a new vibe and I think this cast has a lot of talent and can do great things.”

What is your favorite part about the play?

“The comedy and the play’s constant subversion of expectations. The actors are really bringing out these roles and making bold choices that really elevate the show.”

What is the most challenging part for you personally?

“A lot of the time, directors and actors have different ideas of what the character i’s about and what choices should be made. It’s always hard to let your own ideas go a little bit and trust the director, but it’s something that has to be done.”

Why should people go see it?

“This show is special. It has so much talent and so much vision. It’s Shakespeare with a twist. It’s actually going to be set in a 1950s university library that’s sort of overgrown with nature, providing for a really unique audience experience. On a broader note: supporting the arts is always a good thing. Providing young artists with a platform by funding is incredibly important. Not to mention, the people involved in these shows aren’t just some actors who you don’t know, they’re your friends, sitting next to you in classrooms, and you’re providing funding for something they love. Also, it’s just a good time, so why not come see it?”