Mental health fundraising off to a running start with 5k 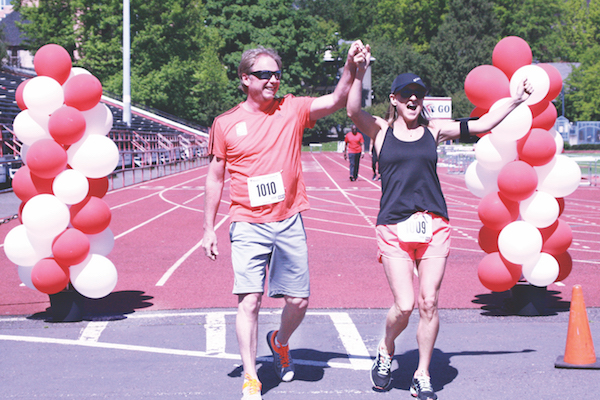 Runners celebrate after completing the rst annual “Five 2 Thrive” at Lincoln on May 21. The event raised more than $2,000 for the mental health program at Lincoln.

There were 40 participants in the race, 50 volunteers, and over 100 people present with spectators. With the help of Church of the City, the event raised over $2,000, which will go towards the mental health program at Lincoln. Participant entry fees, donations, and raffle ticket sales all contributed to the proceeds.

The race gathered numerous sponsors, such as Poplandia, Sammy’s Flowers, and Trader Joe’s.

“I think local businesses really like to support the health of the community. We had a lot of people who were excited about the cause and wanted to show their support,” said Rhea Barlow, a member of The Church of the City, who was involved in organizing the race.

“A fun run is such a great way to get people involved and have a great time,” said junior Annemarie Field, who also helped coordinate the event. “[We] just wanted it to be fun, and crush the stigma around mental health.”

After the success of this year’s race, they are planning on continuing it next year.

“I have already been talking with Ms. [Hanisi] Accetta about doing it again next year and we have a lot of ideas of how we can make it even better,” said Barlow.

“It is important to try new ways to contribute to a growing need that the school and our community have, [which is] to reduce the negative stigma surrounding mental health and to contribute to amount of healthy resources available,” she said.