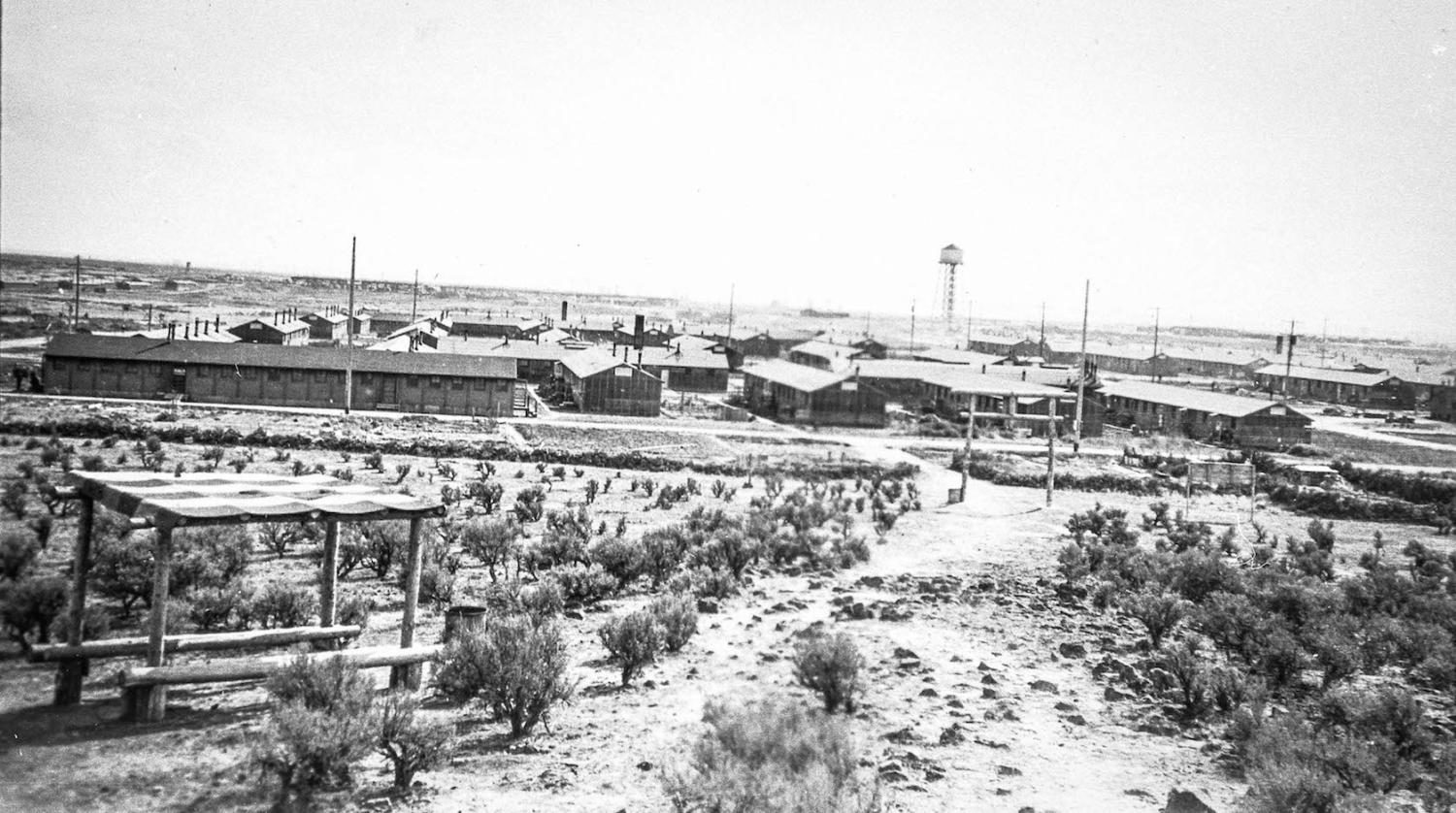 The year is 1942 and the United States is in the heat of World War II. Meanwhile, students at Lincoln High School are going through their everyday lives. But then, President Franklin Roosevelt signs Executive Order 9066, and for Japanese-Americans all over the West Coast, including 49 Lincoln students, their lives change forever.

While many people know about the executive order that marks its 75th anniversary this year, they do not know that it directly affected Lincoln students.

Following the bombing of Pearl Harbor on Dec. 7 1941, President Roosevelt issued the order that sent an estimated 117,000 Japanese Americans to internment camps, according to the National Archives. People were forced to live in makeshift stables and huts, eat army rations, and work for less than $5 a day.

Among them were Lincoln students, who were taken from their homes and sent to the Minidoka internment camp near Hunt, a tiny community in southern Idaho. Among the 49 students who were interned were baseball players, band members, scholarship award winners, and at least one school newspaper staffer, at that time called the Cardinal.

The administration tried their best to accommodate the students’ move. According to the May 11, 1942 edition of the Cardinal, Mr. York, principal at the time, directed teachers to “give all students … a final grade for the term’s work, instead of an ‘incomplete.’” Further, the school mailed editions of the Cardinal and the yearbook to the students.

Dr. Kazuyoshi Kuwata was only one of the many students to be interned prior to graduation. While at Lincoln, Dr. Kuwata had not only been a stellar student, but also treasurer of his class cabinet.

While he was interned, Lincoln administrators, despite strong anti-Japanese sentiment, recognized Dr. Kuwata’s achievements with the prestigious T.T. Davis award, a large college scholarship given one Cardinal each year at that time. Unfortunately Dr. Kuwata was at Camp Minidoka during commencement and was unable to receive recognition for his award.

For many years, the story of Dr. Kuwata and the other 48 students interned was forgotten; however, in 1979, the staff of the Cardinal Times, led by advisor David Bailey and Editor Bill Amsden, researched Dr. Kuwata’s story and united him with the award he deserved.

Amsden says the motivation to pursue the article began with a personal interest, and grew into something bigger. He has always had a very “long relationship with Japan” and simply wanted to inform students about the story of Dr. Kuwata, which he heard from the principal. Along with the story of Dr. Kuwata, the 1979 Cardinal Times staff published a list of each student interned, informing students about the hardships of the camps.

Another one of the 49 students taken to camps was Henry Sakamoto. Now 90 and retired from a career in agriculture, he was a sophomore when Pearl Harbor was attacked, beginning a period of fear for Japanese-Americans.

The attack had an immediate impact on Sakamoto’s life, beginning with an unlawful search of his house by the FBI, and a curfew imposed on all people of Japanese ancestry, he said in an archived interview with the Oregon Nikkei Endowment in 2004. Additionally, he remembers trying to “avoid encounters” with people on the streets for fear of discrimination.

He recalls “not hav[ing] any negative experiences at Lincoln,” but that was his time there was cut short.

In April, four months after the attack, Sakamoto and around 3,700 other Japanese-Americans were sent to the Portland Assembly Center, which was formerly a livestock yard. The area is now occupied by the Portland Expo Center. Sakamoto stayed in a 10-by-12 foot cubicle with his parents and his brother.

He remembers the poor living conditions at the center vividly.

“The dirt contained the droppings of all these animals from all those years,” he told the Oregon Nikkei Endowment. Despite attempts to cover up the dirt, they could not “eliminate the stench and the smell.” There were countless other difficulties, including straw mattresses, lousy food and little to no privacy.

After around five months at the center, Sakamoto and his family were taken by train to the Minidoka internment camp. When he arrived, the camp lacked basic necessities such as plumbing and hot water.

He spent his time in camp at school, and delivering and printing the camp’s newspaper, The Irrigator. During the years he was there, he was even able to graduate high school a year early due to an extra credit given to him by his Spanish teacher.

Directly after graduating high school, the war having ended, Sakamoto left Minidoka for Ohio where he attended Ohio Wesleyan University. However, his stay was cut short when, in the spring of 1946, he was drafted and soon left for Fort Lewis, Washington.

After one year of service, he was discharged and decided to finish his schooling. He attended Vanport Extension Center (the predecessor of Portland State University) for one year, and then finished his education at the University of Oregon, graduating in 1951 with a degree in business. Sakamoto left school and began his 42-year career in the wheat business, working for Department of Agriculture for 32 years.

Another Lincoln student who was interned was Kenji Onishi. Onishi was taken during his freshman year, so spent most of his high school years at Minidoka.

While at the camp, Onishi was very independent, telling the Oregon Nikkei Endowment that “in the camps all the eating and working was done with my friends, I rarely saw my mother and sisters.”

This independence led Onishi to start playing baseball, which helped him meet friends who got through many of the hardships that camp brought.

It was this sense of community that helped many persevere. Onishi says that “if there was one wonderful thing about the camp it was that I, at 15, was able to meet people much much older than I.”

Camp Minidoka had its own school called the Hunt School; this school was designed to make sure that the interned students continued their education, however, it failed miserably, according to students.

Onishi says that some of his distaste for the school stemmed from the fact that “[he] looked forward to going to Lincoln as a boy, then being there and immediately taken away made [him] really dislike the camp teachers.”

While he claimed to thoroughly enjoy some of his classes, “there were some classes where [he] just couldn’t work.” In Onishi’s eyes the education at Hunt was “inconsistent” at best. The facilities were also sub par – students “sat at picnic tables and had no textbooks”.

While the internment camp education was lacking, the true damage to the Japanese- American people was done after they returned. The war had fostered anti-Japanese sentiment, especially in Portland. Onishi, however, doesn’t blame the government for this prejudice because they were ”lobbied by a group of anti-Japanese.”

Following his return from Minidoka, Onishi became a paper boy. It was while delivering papers that he remembers experiencing racism first hand.

He recalls that as he finished his paper route and returned to his house one day, a police officer “followed him to his house and pushed [him] to the side.” The officer then forced him to clean up glass from a window that bystanders claimed he broke.

Onishi had no choice but to comply and pay for a crime he didn’t commit. When reflecting on the event, Onishi made clear that he was the “only Japanese boy in his neighborhood”; this made him a target for abuse for years after the war.

This month is exactly 75 years since Sakamoto was taken to the camp. With the creation of these reminders, he hopes that “the denial of civil liberties will never happen to any other group as it happened to persons of Japanese ancestry in World War Two.”