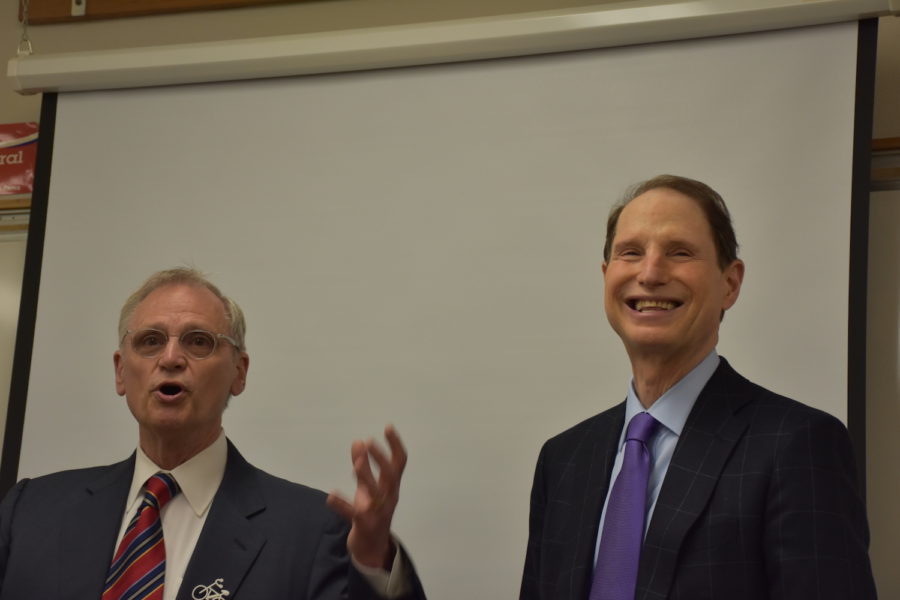 Blumenauer told the students he “would trade [them] straight up for a number of my colleagues.”

The two Democrats, who both count Lincoln families among the people they represent in Congress, came to George Ten Eyck’s first-period class for a scheduled visit. The class includes members of the past year’s Constitution Team. Television cameras from local news stations lined the back of the room.

Notable moments included Blumenauer saying, “Judge [Neil] Gorsuch got royal treatment compared to [Judge Merrick] Garland.” Justice Gorsuch was confirmed by the Senate last week after it used the so-called “nuclear option,” eliminating the filibuster to overcome Democratic opposition. He replaced the late Antonin Scalia, who died in February 2016. Garland was nominated to the post by former President Barack Obama but, in comparison, never even got a hearing in the Senate.

When the issues of Trump’s tax returns was raised, Wyden said the president needed to follow through on his commitments.

A self-proclaimed “privacy hawk,” Wyden responded passionately when sophomore Zia Bajwa asked about issues of personal privacy and government surveillance. “The public’s right to know is always most important,” he said.

Sophomore Sophia Zhang asked about climate change, which some members of the Trump administration have denied is human-caused. Blumenauer responded, “We can’t repeal science.”

The discussion concluded on social justice issues, in particular, Black Lives Matter.  Sophomore Ryan Joiner wanted to know if there were any bills to alleviate issues of police brutality and bias, and Wyden said he was co-sponsoring a bill to reduce profiling by officers.

At the end, both Congressmen thanked students for their insightful discussion to begin the week, which is a recess for Congress. “You all are being good citizens and asking good questions,” Wyden said.

Students said that it was a valuable experience. “I was reassured to know that our representatives seek out constituents and take the time to meet with them and answer questions,” junior Holden Lee noted.

“Knowing that Senator Wyden and Representative Blumenauer sought to meet with high school students was especially reassuring, since students are generally unable to influence election outcomes,” he said.