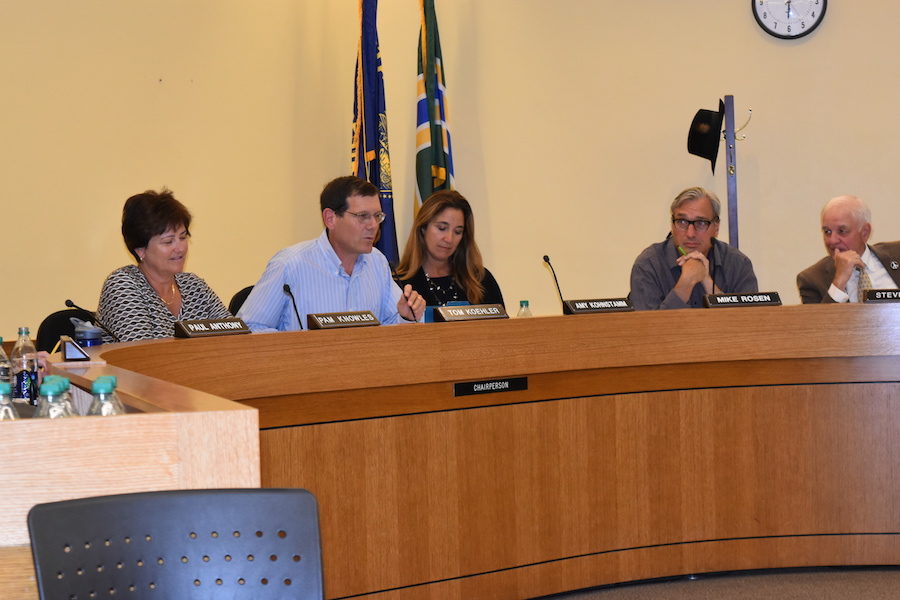 PPS board members Pam Knowles (left), Tom Koehler (second from left) and Steve Buel (right) have announced that they will not stand for re-election this May. Many candidates are vying to replace them.

Three Portland Public Schools (PPS) Board positions are up for election this May,with all of the incumbents leaving their positions. Outsiders hope to garner their seats. With a new superintendent underway and a modernization bond also on the ballot in May, the candidates aim to help lead a new, modernized PPS.

Munson, who is also gunning  for North Portland Zone 4,  led the KIPP Spirit College Prep in Houston, Texas, which educated many low-income families. She works for Teach For America, a company that employs recent college graduates to teach underprivileged, under-resourced charter schools. Munson’s support for free choice of schools as well as test-based acceptability draws much criticism from unions. Some critics may even call her an opponent of the school unions.

Parent activist Virginia La Forte, known for her influence over tackling the lead crisis, seeks the seat for Northeast Zone 5, held by Pam Knowles.  La Forte is known for urging the district to take action on the lead pipe issues and she  filed a complaint to the Oregon Health Authority concerning the paint chips at Alameda Elementary School. La Forte called on PPS officials to test the chips for lead.

Longtime district advisor Scott Bailey is challenging La Forte for the seat. The economist deems the central office to be the worst weakness of PPS. In 2012, he pushed to get rid of K-8 schools and backed the 2012 PPS school bond.

Both Moore and Bailey have run for seats on the board before.

Among Southeast Zone 6 candidates are Ed Bos, Joseph Simonis, Trisha Parks and Julia Brim-Edwards. Bos, an executive of Cascade Pacific Council of the Boy Scouts, served in the Oregon National Guard as a staff sergeant. Simonis is a data scientist, and Trisha Parks is a Beaverton teacher. Parks, also a union leader, has received strong backing from the teachers union. A former PPS board member, Brim-Edwards was a last-minute addition to the race. Brim-Edwards offers to bring budgeting and management as the current global operations director at Nike. She also serves as a member of the Oregon Education Investment Board, and has been endorsed by Board chair Tom Koehler, who is not running for reelection.

The teachers union has announced its support for Bailey and Moore, as well.