Is modern technology a blessing or a curse? 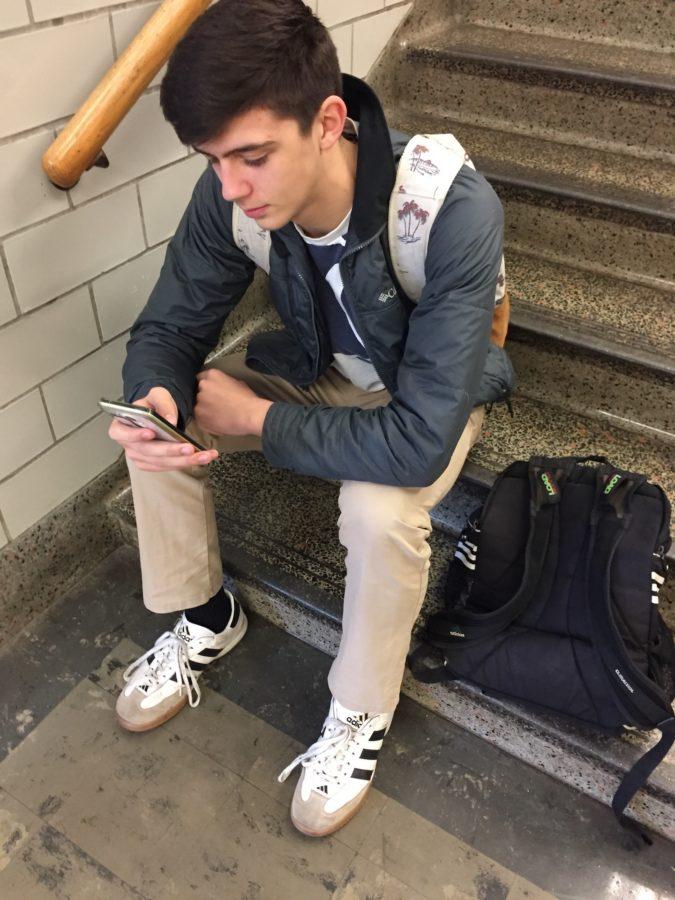 Junior Jacob Jedynak uses his phone in the hallway.

That little device always buzzing in your pocket  — so tempting to just check it for a couple seconds.

Then, what went from a couple seconds transformed into a couple minutes, and now you’ve missed the teaching of the new unit. The relatively recent addition of phones and technology to the lives of high schoolers has added a debate about its strong influence on students education.

Thinking back to the times your phone was used, how often did you actually use it for educational purposes?

Smartphones represent just one of many technological changes in the last couple of decades. Reflecting on school before the outbreak of modern digital  technology, things were much less efficient in the past.

For example, instead of having ready use of copy machines and printers, students and teachers had to resort to things such as mimeograph machines to make copies.

Instead of making multiple clean copies quickly, a person had to put up with a painstakingly slow hand crank machine, which could produce one copy through each rotation.

If a teacher desired to show a film in class, he or she would have to put in a request for a 16mm film and a projector. If provided, then it was up to the teacher to decide whether he or she could even operate it their self, or if a technology crew was needed.

It may sound inefficient, but back then, it’s all the teachers knew. In some respects, the technology from then was directed to complete the same tasks as technology does now, just at a much less-efficient rate.

In this day and age, however, a much more powerful and addicting device has been produced. The relatively new handheld smartphone offers a wide range of useful variety to the user; with abilities to access internet, gaming, social life, and much more.

That can be a blessing or a curse, in the view of some teachers.

“The access of knowledge we have has so exponentially mushroomed,” says David Bailey, a Lincoln teacher currently in his 49th year of teaching.

Bailey is very aware of the plusses and minuses of the smartphone, but in his opinion, a phone in a student’s hands is only a distraction.

“Students just aren’t that sneaky, they think they are, and I find that insulting,” says Bailey on unpermitted phone use in the classroom. “They become a distraction quite often in learning.”

Along with Bailey, Gary Pearlz, another Lincoln teacher currently in his 16th year of teaching, possesses a very similar view. “I’m not afraid to use the word addiction,” says Pearlz.

He believes that the smartphone has posed a new threat to a student’s ability to focus or take the time and solve a tough problem without quick stimulation of a phone. From his own experiences, he says, “I do see more difficulty in engaging deeply and staying engaged [since phones became widespread].”

“The solutions phones offer are slight improvements over what we had before, at the price of a whole lot of brand new distractions and addictions and bad habits,” says Pearlz.

Pearlz uses a pocket system, requiring his students to put their phone in a pocket near the door of the classroom as they enter the room.

He is very concerned with the road society is headed down with the smartphone. In his words, it seems to be an “epidemic of destruction,” as the phone comes with a high price for society.

“I believe we are making it a lot harder for ourselves.”

Although phones may be a very frustrating annoyance to teachers, Pearlz doesn’t completely blame the students for their addictive behavior.

“People who program phones know exactly what works to get our attention, to keep it, and to get us to want to keep coming back and checking,” he says.

And indeed he is correct. For example, Twitter (and other social media apps) have a notification section. The app designers strategically make it so the notification pops up 2-3 seconds after entering the app. Former Google employee Tristan Harris told the PBS NewsHour, “It’s like a slot machine.”

The time delay builds up anticipation, and once the user is able to see the new notification, it releases a chemical that is pleasing to the senses. “You become more addicted to checking it again the next time,” says Harris.