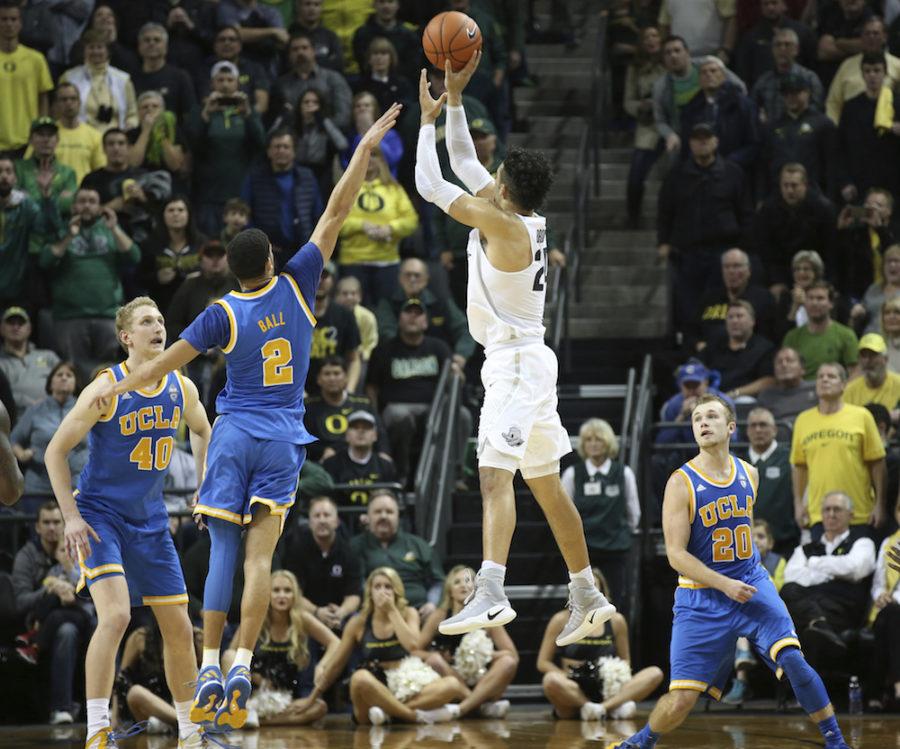 Sophomore Elliot Balmer has sworn to “never put money into March Madness again.” Similar thoughts are probably running through many Lincoln students minds as many favorites have already been knocked out. No.1 seeded Villanova, No.2 seeded Duke, and No.2 seeded Louisville all fell in the round of 32.

In ESPN brackets, Villanova and Duke were the second and third most commonly picked champions and their losses resulted in many busted brackets. Despite the near certainty for failure, millions of Americans continue to fill out brackets in hopes of defying the one in 9,223,372,036,854,777,808 odds of a perfect bracket.

Just another day in the life of March Madness, the premier college basketball tournament, which began on March 14 with the first four play-in games. In the first weekend, March 16-19, the number of teams dwindled from 64 teams down to 16.

The Sweet 16 began Thursday and will conclude tonight. The winners of Elite Eight matchups this weekend will punch their tickets to the Final Four in Phoenix, Arizona. The culmination of the tournament will be a week from Monday as the winners of the two Final Four matchups will face off in the National Championship.

Gonzaga is the overall No.1 seed in the West Region and it handily won its first matchup 66-46 against No. 16 South Dakota State. The Zags then took on eighth-seeded Northwestern, which was making its first ever appearance in the tournament, and Gonzaga prevailed with a 79-73 win.

Gonzaga has had quite a wild season already. It was previously ranked No.1 during the regular season, but then a tough loss at home to BYU knocked it down. However, the Zags bounced back and won the West Coast Conference, beating their rival St. Mary’s and earning an automatic bid into the tournament.

Gonzaga is no rookie in the NCAA tournament – in fact, this is its 20th consecutive appearance. Gonzaga was awarded a No.1 seed despite some speculation about their weak schedule and their one loss to BYU.

Nonetheless, Gonzaga has punched its ticket into the Sweet 16. Their next game is against the No. 4 West Virginia Mountaineers, who reached the Sweet 16 with wins over No. 13 Bucknell and No. 5 Notre Dame. Gonzaga is hoping to reach its first ever Final Four.

Arizona surprised many people by beating UCLA and Oregon to win the Pac-12 Conference tournament, even though both teams had beaten Arizona earlier in the regular season.

The Wildcats are always a strong team in March. This year, the team earned the No. 2 seed in the West Region and started the tournament with wins over No. 15 North Dakota and No. 7 Saint Mary’s. Next, Arizona will take on No. 11 Xavier, which upset No. 3 Florida State in the round of 32.

The potential of an Arizona-Gonzaga Elite Eight matchup is on the line. It would be the second meeting between the two teams. Gonzaga won the first meeting 69-62 back in December. Arizona has been to the Final Four four times, the last in 2001.

The Oregon Ducks, led by forward Dillon Brooks, guard Tyler Dorsey and forward Jordan Bell, began their quest to a Final Four by handily taking care of No. 14 Iona, 93-77. In the next round, No. 3 Oregon was given a scare by No.11 Rhode Island. The Rams led for most of the second half, but a game-winning three by Dorsey propelled the Ducks to a 75-72 victory and into the Sweet 16. There, the Ducks will face the red-hot Michigan Wolverines.

Oregon is hoping to go further in the tournament than it did last year– losing to Oklahoma in the Elite Eight. However, it could be an uphill battle, as star forward Chris Boucher tore his ACL against California in the Pac-12 tournament. If the Ducks want a trip to Phoenix for the Final Four, they will need to defeat Michigan and the winner of Kansas and Purdue.

The highest scoring team in the country, the No. 3 UCLA Bruins, led by freshman phenom Lonzo Ball, are another team that could go deep in the tournament. The Bruins began their quest for a Final Four with a win over No. 14 Kent State. Then UCLA defeated No. 6 Cincinnati to advance to the Sweet 16 and a matchup against No. 2 Kentucky.

Lincoln students are excited for the remainder of March Madness. Sophomore Nate Stember said that he is carrying more interest into this year’s tournament than usual because “Oregon and a few other teams from the West Coast have a real shot to win it all.”

In fact, four of the remaining teams are from the region, meaning they have fans in Lincoln’s halls. The Sweet 16 began Thursday and the Final Four will be revealed Sunday.

Leaders of Cardinal Times bracket pool, as of March 22