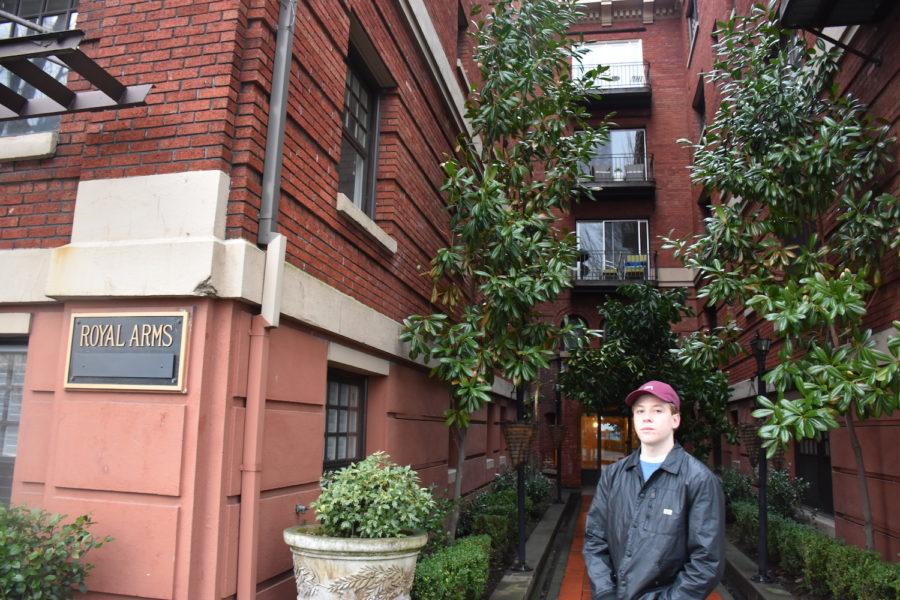 Senior Kadison Roberts at his former apartment building, where he escaped from a fire on Jan. 23.

When senior Kadison Roberts woke up to fire alarms in his Northwest Portland apartment building on Jan. 23, he originally thought it was a drill.

Then he saw massive amounts of smoke in the hallway and realized it was the real thing.

Kadison lives by himself in the Royal Arms Apartments at 1829 NW Lovejoy St. He later learned the fire was due to an electrical problem in an elevator shaft.  It started around 6:30 a.m.

“One thing I did want to grab was my Bob Marley albums, but I didn’t end up grabbing them because I thought I’d look a little a silly,” says Roberts. However, he said he grabbed his wallet, keys, phone and a few clothes.

One man even jumped out of the second floor of the window in response to the smoke and received serious injuries, according to KOIN. Another woman suffered critical injuries from smoke inhalation and was rescued by fire crews. About three hours later, the Red Cross arrived to provide temporary housing and food.

The fire filled the building with toxic smoke, which seeped into floors and ceilings, meaning that most of it needs to be rebuilt. All of the residents, including Roberts, were evacuated and have not been able to return.

Roberts moved to a new apartment, and does not expect to be back to the Royal Arms.

His main takeaway from this experience was to be more prepared for fire safety.

“Know your fire exits, I took the stairs, but in hindsight I should have taken the fire escape,” he says.