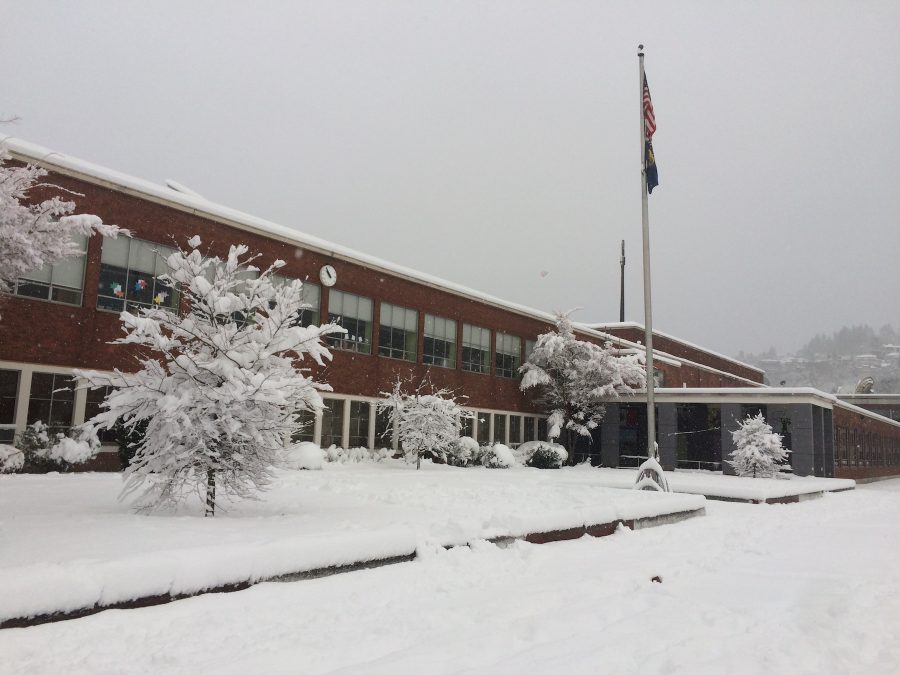 Nearly a foot of snow covers the Lincoln patio after a historic snowstorm Jan. 11. Students have missed nine days of school as a result of weather so far this year.

What made the digital learning easier was La Salle, Jesuit and the other private schools was their “one-to-one” system, meaning every student is provided with an electronic device – such as an iPad — for all their classes and textbooks. Knowing this, Kuffner was interested in trying online learning for the students later this spring to test it out, however the first trial came sooner than expected.

The principals at the Catholic schools actually got a head start on digital learning a month earlier when Portland was hit by the winter’s first storm, days prior to winter break. That storm resulted in four snow days and they met, to discuss how to recover those lost days. During that meeting, Jesuit’s principal, Paul Hogan questioned, “boy, what are we going to do if we have have more snow days?”

They recognized that snow would result in added days to the school year, which would conflict with family plans. From there they came to a conclusion: Digital Learning days.

In addition to providing additional instructional hours, Kuffner also hopes digital learning will help students be better prepared for the future. He explains that learning is becoming more digital today and in college many kids will have experiences of learning virtually. He says, “learning happens everywhere not just in a classroom.”

While they knew it wasn’t the same as face-to-face interaction, the schools didn’t find as many problems as expected. Both schools, Jesuit and LaSalle, conducted various surveys for teachers, parents and students, and found positive feedback from the majority of responses. La Salle piloted the online system on Jan. 9, and other schools followed suit by Jan. 11.

Based on survey responses from the first day, La Salle students found it helpful in that they felt less stressed and enjoyed the fact that they “got to sleep in later.” However they also responded that the workload was too much, and deadlines were too tight for the amount of assignments.

With this feedback, Kuffner was able to communicate with the other principals and make changes to the digital learning days over the next three days to make it productive and effective for the students and teachers.

Hogan was also pleased with the results collected after the digital learning days. After analyzing answers from Jesuit teachers, parents and students, he said that “it was amazing how well they lined up.” When questioned whether expectations were clearly communicated, about 80 percent rated it a 4-5 on scale of 1 to 5. And, if they were to implement this again in an emergency, about 80 percent claimed yes by rating it an 8-10 on a scale out of 10.

La Salle had conducted similar surveys, and also had similar conclusions. Students rated on a scale from one to five of whether the system was supportive, and found that 7.6 percent

didn’t find it supportive, yet 53.9 percent said, “I am fully supportive of a virtual learning day over added school day(s).” Those who didn’t support it either had connection problems, trouble concentrating at home or difficulty coping with the amount of “busy-work”.

Although both Jesuit and La Salle found digital learning days very successful for their students, the system wouldn’t be the same for a Portland Public school, even Lincoln. PPS schools do not have a one-to-one program like La Salle and Jesuit. Some Lincoln teachers don’t even have a website, making any digital communication difficult.

While all of PPS, and high school students here enjoyed a long break for catching up on sleep, hanging out with friends or spending time with family, other students from the Catholic schools were spending about five hours a day working. That means those students will end school on time, while Lincoln students and others from PPS schools are left with a slightly shorter summer.

Read about how PPS decides when to have a snow day here.