How a snow day happens 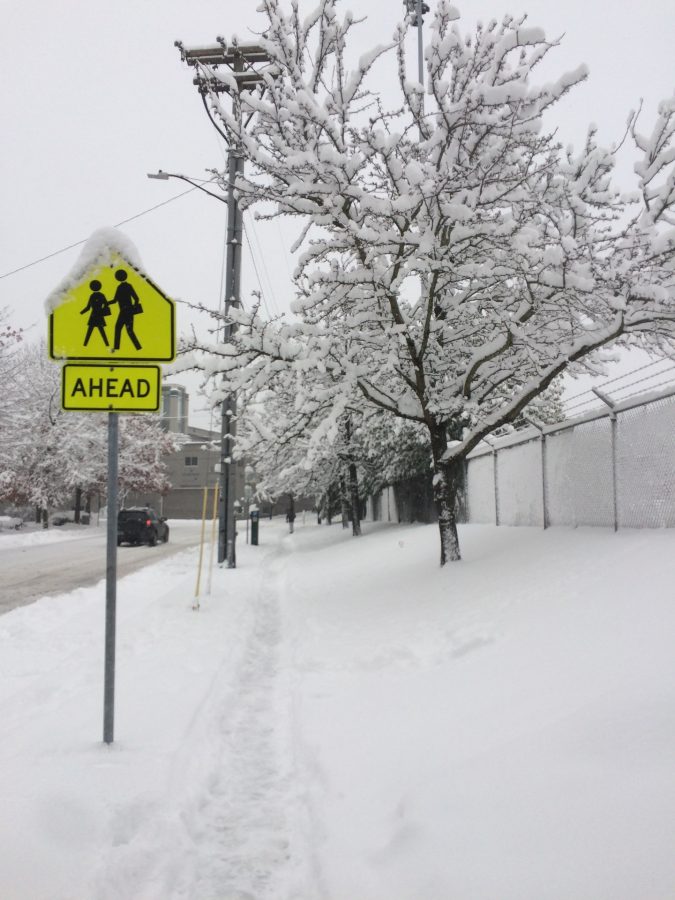 Nearly a foot of snow coats the Lincoln campus on Jan. 11.

The 2016-2017 Portland Public School year has been anything but ordinary in terms of the amount snow that has fallen in the months of December and January. In total, PPS has allowed nine snow days, which already pushed back first semester’s finals week and added three days on to the end of the school year.

On average, Portland gets 2.9 inches of snow annually. So far this school year, we have gotten about 16 inches, causing a major disruption in school.

On the night of Jan. 10, 12 inches of snow fell in downtown Portland, and 15.5 inches fell in hills by Pittock Mansion. This record snowfall postponed school until the morning of Jan. 18, with a late start and piles of snow still on the ground.

That storm came on top of another one on Dec. 15, which closed schools for two days leading up to Christmas Break.

It also led a lot of people to wonder: What choices does the district have when snow falls and how does it make them?

The district has two options in the event of bad weather: Delay school openings for two hours or close the schools altogether.

“Before deciding what to do, district officials consult with local meteorologists, city transportation officials and PPS transportation staff in the field,” Courtney Westling, Government Relations Chief of PPS, told the Cardinal Times.

PPS follows a process to determine whether or not the roads are safe. This includes PPS Transportation office staff and members trained in meteorology (whoever is on hand) to test the roads on the morning of a school day.

Along with district wide decisions, the PPS District office can also make decisions on a school-by-school basis depending on the school’s location. For example, the district may close or delay schools at higher elevations — where snow is likely to be heavier —  while keeping schools at lower elevations open.

The district says that the main reason for closing schools for snow days is “the temporary inability to safely and properly transport students to school by bus.”

Although the district wants to ensure the safety of the students in abnormal weather, there is a minimum number of hours that students must be in school for the district to meet state standards.

Based on grade, there are a set number of hours that students must attend class. Westling says, “For K-8, they must have 900 hours, for 9-11, they need 990 hours, and seniors need 966 hours to meet the state’s standards.”

The PPS Board of Education has built into the calendar up to three replacement days in the event of school closures. The state also passed a waiver to alleviate 14 hours, two school days, from the board’s responsibilities.

But, that still leaves four other school days needed to be made up either at the end of the year in June, adding some Saturday classes, or shortening spring break.

Although the PPS board is still scrambling to figure out when to make up the lost snow days, Westling says, “Under no circumstances will graduation be moved back.”

Watch intended weather forecasts and consult with Portland Bureau of Transportation weather officials. Determine if intended weather forecast will occur in which parts of the district (ie Forest Heights, or Cleveland district, etc…)
In the morning, a series of members of the PPS Board Transportation office and members trained in meteorology (whoever is on hand) test the roads in all sections of the PPS district to determine if the weather is a threat to student safety
If weather conditions threaten student transportation safety, determine whether to have a late opening, or close school all together. If weather conditions will not improve by the time school starts, a late opening will most likely be safe. If by that time weather conditions don’t improve, closure will be best option
Notify parents and students in the district of the intended plans for the school day, leaving enough time in the morning for parents to make other arrangements for their child if needed.

When PPS does choose to take a snow day, should it be a “digital learning day?” Read about the new idea here.