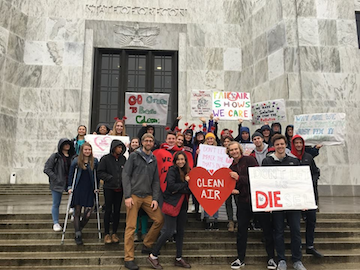 EJS class in front of the Oregon Capitol on Feb. 15.

At the beginning of the 2015-2016 school year, then-junior Gaby Lemieux created Lincoln’s Environmental Service Projects club. While she created the club because of her own passion for the environment, and engaged students by showing them ways they could live more sustainably, she soon came to realize that individual action would be not be enough to address the issue of climate change. So Gaby, working with Social Studies teacher Tim Swinehart, helped to pass the PPS climate resolution, and started the Environmental Justice and Sustainability (EJS) class.

Many of us have known for the past several years that climate change is an issue, but when we learned about the forces that stood in the way of change, we often felt a sense of despair.  For some of us, watching the documentary How to Let Go of the World and Love All the Things Climate Can’t Change by Josh Fox in EJS was both the nadir of our hopes and spark that made us realize that we must become involved in the fight against climate change. We were the only ones who were capable of protecting our futures, and the futures of others. This was the beginning of our journey, and it became a class goal to influence Portland’s ban on the expansion of fossil fuel storage tanks along the Willamette River in any way that we could. The fact that Lincoln is  walking distance from City Hall meant that we could directly contact the Portland City Council, the five individuals who were going to make the decisions.

As part of Lincoln’s EJS class, we have taken on leadership roles within our community. In  November, our class marched from school to City Hall, holding signs, cameras, and a stack of 500 public comments. Our class of 31, joined by other activists from 350 PDX, a local chapter of the environmental organization 350, and community members, raised our concerns about a coming proposal regarding Portland’s creation of additional, and expansion of, existing, fossil fuel terminals. We hoped to restrict the building or expansion of any terminals. A few of us co-wrote speeches to present to each city commissioner individually, including then-Mayor Charlie Hales. “I felt the need to use my voice, and wanted to speak,” said senior Haile Peveto, who presented to the mayor. We flooded into Mayor Hales’ office, where he gave an empowering speech thanking us for coming, noting that students’ voices are often the most influential. “At first, speaking to the mayor and other staff members felt intimidating, but as I spoke, my voice became stronger. I found myself speaking genuinely, rather than just reading from my paper,” says senior Eddie Rosen. Overall, our class had an empowering experience standing together, smiling full of passion for a collective cause. We left City Hall a few hours later, with sore cheeks from smiling and feet tired from the restless experience. As 17-year-olds unable to vote in the state and federal election, we learned that we can still make a significant impact in our community by engaging with policy makers to advocate for what is needed.

Before students presented formal testimony to the Council, a rally took place on Nov. 10 outside of City Hall with a group of about 75 supporters of the fossil fuel ban. Seniors Tyler Honn and Lemieux gave a speech, and later they, along with Tucker Holstun, Mimi Rupert, Haile Peveto, and Gracie Summers, presented testimony to the City Council. In a particularly poignant moment, Tucker Holstun stated, “While our world is, in a cosmic sense, fragile and small, this only verifies that as the caretakers of this world, we have the power to alter our course if we so choose.”

On Dec. 15, the City Council voted yes to adopt new zoning code changes that will not allow the advancement of construction of new fossil fuel terminals that exceed 2,000,000 gallons of fuel. Hales thanked the involvement of high school students, among others, for their involvement in the decision.

In addition to environmental activism, each member of the EJS class participates in one of several sub-groups that works on its own project. These focus groups include creating an art show, conducting a greenhouse gas analysis of Lincoln to raise awareness, documenting EJS activities, educating younger students in middle and elementary schools, and showing environmental films.

We continue to be heavily involved in the fight to protect the environment. On Feb. 15, our class traveled to Salem to advocate for stricter clean-air standards and the replacement of dirty and dangerous diesel engines with new engines that reduce emissions by at least 95 percent. We were accompanied by the Lincoln clubs Sisters of Color and Brothers of Color, who emphasized the fact that people of color and those who live in low-income areas are more likely to suffer the effects of diesel pollutants. While at the Capitol, students were debriefed by What’s in Our Air, a nonprofit concerned with the air quality of Oregonians. Later, seniors Honn, Lemieux, and junior Sophia Wilson spoke to State Senator Michael Dembrow regarding steps they hope the Oregon legislature will take to reduce diesel emissions. Afterwards, the EJS class and clubs met briefly with Gov. Kate  Brown, who assured us that $70 million from the VW scandal will be allocated towards making Oregon’s air safer.

The class looks forward to participating in the People’s Climate March on April 29. Our other objectives include instituting more climate education throughout PPS and ensuring that the new Lincoln building will be as environmentally sustainable as possible.