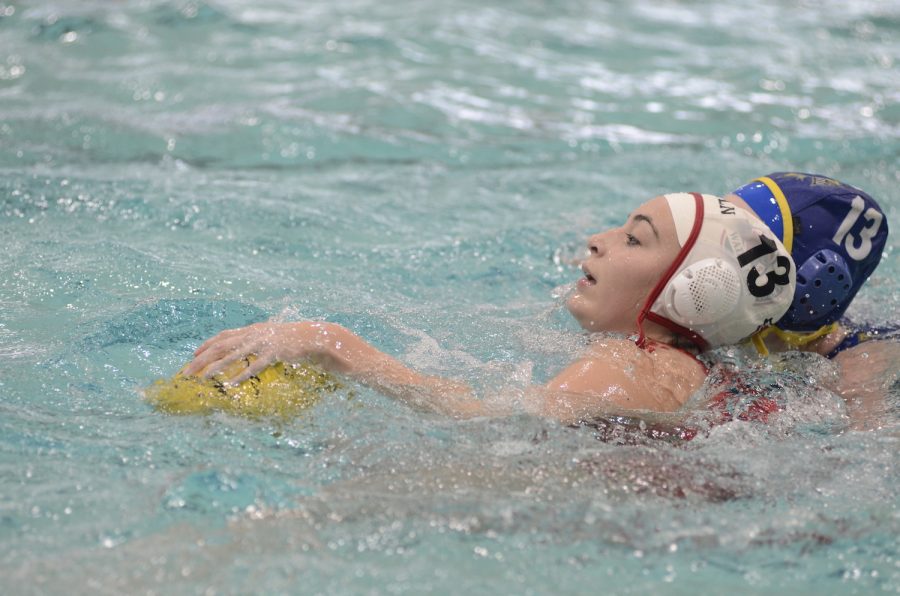 Senior Carli Tovar (white cap) faces a challenge from a Newberg player during the 3rd place match at the State Championships Nov. 12 in Corvallis. The Cardinals lost 7-6.

After a grueling three-month season involving early morning practices, “daily doubles,” and trips to California, Lincoln’s water polo teams made deep runs into the playoffs, with the girls falling one goal short of third place in the state.

The girls captured the West Metro league title for the fifth year in a row with an undefeated record in league play. Overall, they went 21-2-1, qualifying them for the state playoffs. The team swept through the first two rounds with big victories against West Salem and Reynolds on Nov. 5.

The next weekend, the team headed to the State Championships at Osborn Aquatic Center in Corvallis. In the semifinals on Nov. 11, the team fell in overtime 7-5 to Westview, then Newberg narrowly captured third place with a 7-6 victory over the Cardinals Nov. 12.

The boys also qualified for the playoffs with an 8-13-0 overall record, 4-6-0 in the West Metro, which includes powerhouses such as Westview and Southridge. Lincoln beat Reynolds 11-9 in the first round on Nov. 4, but fell to Westview 16-6 the same day. The first round victory allowed the team to travel to Corvallis to compete for fifth place, but it could not get past Barlow, losing 14-8 on Nov. 11.

Girls coach Michael Byrd was voted Coach of the Year in the West Metro league.

“We started out the season really strong and played some great games at the West Metro Tournament. We fell flat our last few games, but overall our season was fantastic,” goalkeeper and utility player senior Colette Jesson said.

Jesson and Carli Tovar, both seniors and co- captains and team’s only graduating seniors, were named first  for West Metro League.

The small number of graduating seniors and the overall youth of the teams should bode well for next year. Five juniors started for the girls this year, and underclassmen formed the majority of the boys team.

Water polo is a club sport, meaning it is not funded by the school like other sports. The teams holds annual car wash fundraisers to pay to rent the pool at Multnomah Athletic Club for practices and games.

However, Jesson said that those fundraisers double as team bonding at the beginning of the season. “It’s work, but we make it fun,” she said.