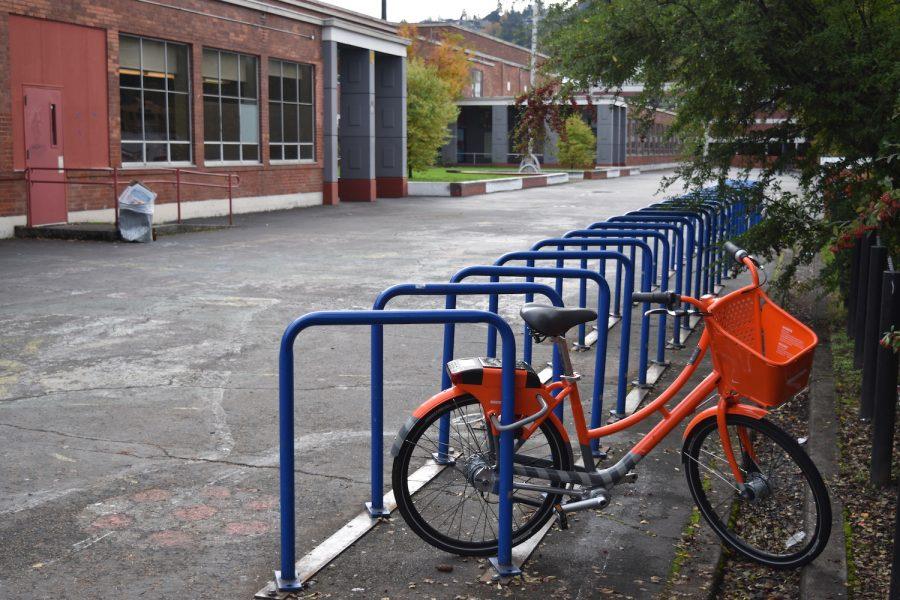 A Biketown bike sits on the rack outside Lincoln.

In their first month of service, Biketown bikes traveled 136,412 miles, equal to more than five trips around the earth, according to Portland Bureau of Transportation spokesperson Dylan Rivera.

The new city bikeshare program has been a big hit with the public since its launch on July 19.

“We’ve really been very pleased with how much the bikes have been used and how well received the program has been,” says Rivera.

William Bennington, who was using the Biketown rack near Director’s Park in downtown Portland one recent afternoon, would agree with Rivera.  He pays monthly to use the program, which he calls “fantastic,”and a great way for him “to get around town quickly.”

Sophomore Jax Nicoloff agrees, saying the bikes “not only help the environment but also give people a way to quickly get around Portland.”

While there are many benefits to the program, some are concerned with the fact that it does not provide helmets.

A daily bike commuter, sophomore Madeleine Kennedy, says she would not use the bikes without a helmet due to safety concerns. Another sophomore and biker, Illiana Schuring, says she would probably still use the program, but definitely bring a helmet if she knew she was going to be biking.

Dr. Ben Hoffman, a pediatrician at Doernbecher Children’s Hospital, agrees that biking without a helmet poses a risk.

“Helmets will prevent 80 to 90 percent of serious head injuries,” says Hoffman. However, he later cited a study that showed positive signs for bikeshare programs.

“The total number of injuries in the cities that had bike shares decreased about 28 percent.” While Hoffman definitely thought this study could suggest cities with bike share programs were safer, he noted that there was not enough data to conclude anything.

Rivera emphasized that safety is a top priority for the Portland Bureau of Transportation.

“As we researched bike sharing systems across North America, we observed what other systems were saying about helmet use and about the options for providing helmets and we really found no system has the technology that we think works,” says Rivera. “We thought it would be best to start as soon as we could and try to still pursue helmet access after the system launches.”

“Biketown, like many bike sharing systems, [is] spending a lot of time and effort to try and encourage helmet use,” he says. Rivera added that the city has has formed partnerships with Nutcase Helmets and Legacy Healthcare to provide to free and discounted helmets to Biketown members.

Despite the safety concerns, almost everyone sees the bike share programs as a positive.

“The bike share programs are great and I would encourage people to use them. It’s a really cool thing that Portland finally got into that game,” says Hoffman.