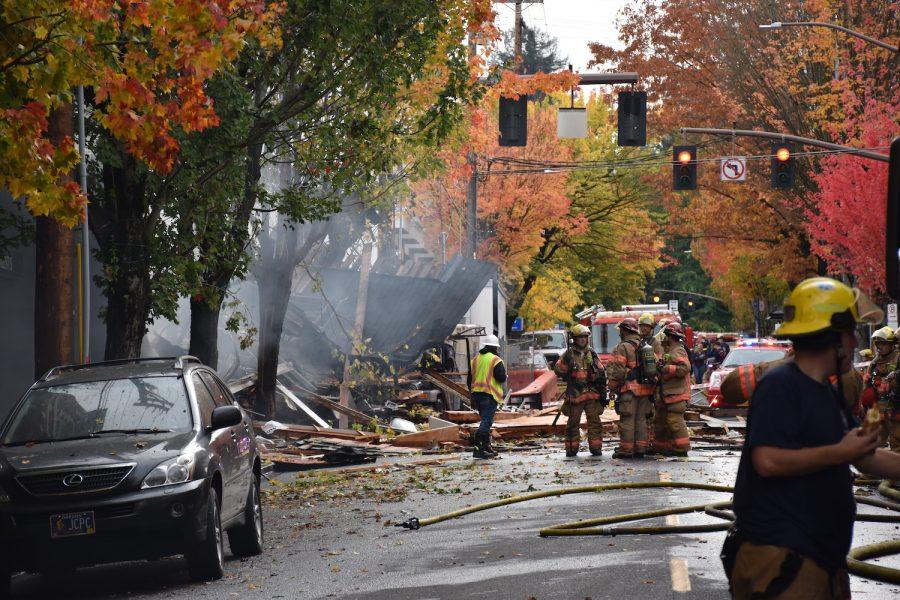 The roof of the bagel store was thrown across the street by the blast.

An explosion Wednesday morning destroyed a bagel store along N.W. 23rd Avenue, a popular shopping destination in the Lincoln area, injuring eight people in the process, including three firefighters and two police officers.

The blast at Portland Bagelworks, 500 N.W. 23rd Ave, occurred at 9:38 a.m. and heavily damaged surrounding businesses on the corner of Glisan and 23rd, including Dosha Salon and Pizzacato.

Firefighters and gas crews arrived at the scene around 9:10 a.m., after a private contractor reported hitting a gas line. A building is under construction in the lot across the street.

Firefighters made the decision to evacuate the surrounding buildings in the minutes before the explosion, likely saving many lives, fire chief Mike Myers said at a press conference Wednesday evening. They also positioned their apparatus to avoid casualties. That is why those injured were mostly first responders: two firefighters suffered broken legs, another firefighter and two police officers suffered minor injuries, along with three civilians.

Though the source of the gas is known, investigators do not know what ignited the explosion.

Dispatch audio is chilling. Calls of “mayday, mayday” are heard, along with groans from an injured firefighter. A commander on scene calls repeatedly for more ambulances.

The explosion ignited a large four-alarm fire that burned for several hours. At one point, more than 100 firefighters were on scene.

Windows were shattered up and down 23rd, including some on Burnside, over a quarter-mile away, according to KATU News.

A man who works in a law office next door to the bagel shop said that he thought enough time had passed for the threat to be over when the building exploded.

“It’s hard to describe,” he told the Cardinal Times. “It literally just blew up, then flames were shooting into air.” He hoped the damage to his office was only from smoke, but he may not know for several days.

The explosion was heard throughout the neighborhood.

Younghee Kim, who lives three blocks away, said she ran outside because she thought her building was falling down. It reminded her of the bombs during the Korean War when she was young.

One resident who lives at N.W. 22nd and Northrup, eight blocks away, said his doors shook.

Surrounding streets remained closed at 1:30 p.m. Residents sat on curbs outside the police cordon, which in some places was two blocks away.

Dozens of police positioned at corners kept residents out, and other officers rode ATVs to deliver lunch, donated by Fred Meyer, to the first responders, preparing for a long wait.

Among those in the area were Mayor Charlie Hales and Fire Commissioner Dan Saltzman, who helped coordinate firefighting efforts, as well as Portland Timbers defender Vytautas Andriuškevičius.

The explosion occurred during Lincoln’s administration of the PSAT. Many sophomores, who took the test at the Tiffany Center, said they were interrupted by loud sirens as firefighters dispatched second, third and fourth alarm crews.

As of Thursday morning, one firefighter remained in the hospital. Fire Bureau and ATF investigators continued to pick through the rubble.

N.W. 23rd between Flanders and Hoyt will be closed for days, impacting traffic. Trimet has said that the line 15 bus, which is heavily ridden by Lincoln students, will be detoured until Sunday, skipping stops from Burnside and 21st to Northrup and 23rd.

The actions of first responders Wednesday drew praise from across the state, and reminded many residents that the Portland Fire Bureau is willing to fulfill its motto, “Always Ready, Always There.”

Daniel Lewinsohn contributed to this report.